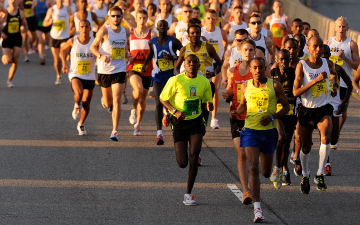 There was a ton of interesting information that didn't fit into the final version of my story on using math to predict world record performances in track and field.

First of all, the mathematician who developed the model, Brian Godsey, in addition to being a graduate student at a university in Austria, is a world record holder. Not for any typical track and field events, but for backward running. His records are for the 3000 meters in 11:19, and 5000 meters in 19:31, according to this website. It's worth a glance -- who can imagine running almost 100 miles backward in 24 hours?

"There is a problem with distance races because, in any distance race, whether it's a marathon or a 10-K or the steeplechase, people need other people to run with. You typically cannot break records by yourself. Whereas, you can do that in the 100 meters, or the high jump, or something like that. You can have a lot of people run fast in a distance race and not have a record be broken because there's just not that extra little push of having someone to run with for the whole way. I think distance races might be a little too probable according to these methods."

Steve Haake, director of the Centre for Sports Engineering Research at Sheffield Hallam University, in the U.K., told me that the nature of sports research has changed greatly in the last few years. Now, it's not just about making better equipment for the athletes, but about analyzing performance data to find an edge, he said:

"Before Beijing we were doing mostly the enabling technologies. We were looking at the aerodynamics of helmets, the aerodynamics of bikes, things like that. Now it's switched, that the majority of our work is setting up systems to collect data. What that means is, we can still do the enabling technologies, we can still look at a new helmet, but now what we can do is we can immediately know from the way that we've done the measurements on the track whether it's made a difference or not. You can immediately see those effects. So the interventions are a lot faster. We're getting that knowledge and understanding much more rapidly because of these embedded technologies. And that will only increase further."

I'll leave you with this link to an interesting story about how technology can giveth and taketh away when it comes to world records in swimming. The high-tech swimsuits credited with helping swimmers rewrite the record books in 2008 and 2009 were made illegal. But the organization that oversees swimming now allows different starting blocks, which might give swimmers a new edge. Check out this detailed explanation of the physics from Wired.

This blog entry from The Science of Sport makes some interesting points comparing the early races from 2008 and 2012 (don't forget to check out the comments as well).