Major companies from Hershey to Barilla are exploring the technology.
Image 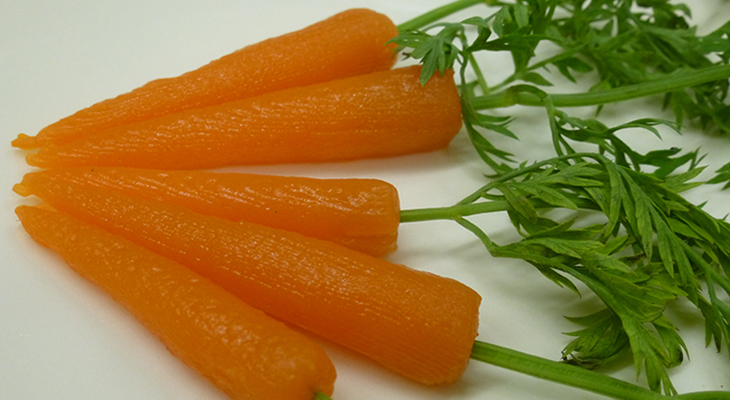 (Inside Science) -- This summer, a nursing home in Germany will start serving an unusual culinary treat: meals created by a printer that transforms mush into three-dimensional foods.

Assembled from veggies or meats that have been cooked and then blended, the menu items will have the original shapes of their ingredients. Carrots will look like carrots, and pork like pork. But the textures will be strange, similar to that of jelly. That softness is deliberate. It should help elderly residents of the home swallow the food without the risk of choking.

"Because these people can't chew their food very well, they typically have to eat purees," said one of the brains behind the meals, Kjeld van Bommel of the Netherlands Organization for Applied Scientific Research (TNO). "We wanted to provide something more appetizing."

Food is relatively new territory for 3D printers, which got their start creating prototypes from plastic in the 1980s. Walk into a Home Depot, and you'll likely see one slowly fashioning plastic animals and other doodads a few inches high, guided by instructions created from digital blueprints. A nozzle on the machine passes back and forth over a surface, like the head of an inkjet printer. Layers of material are traced on top of each other, one by one, to build a solid object from the bottom up.

This additive process gives designers working with plastic, metal, food, and other substances the freedom to create forms that would be difficult or impossible to fashion with traditional fabrication methods.

Loaded with mushed-up salmon, the TNO printer can thus shape a fish fillet. And the consistency of that fillet can be adjusted by customizing the mix of ingredients going into the printer; just add more of a binding agent that sticks the food mush together for more firmness.

Printed edibles aren't for only the aging and infirm. During a food expo in Milan in May, pasta mega-manufacturer Barilla showed off a device, created in collaboration with TNO, that can print pasta in wacky shapes – such as Christmas trees, full moons, or even roses that unfold when cooked.

The most exciting -- and technically demanding -- future application for 3D food printers may be fashioning meat substitutes. Some researchers have begun experimenting with algae proteins as a replacement for animal protein. Others are chasing the holy grail: making meat from cow cells grown in a lab.

"That's the real promise of the technology: making things that mimic biological tissues," said Mark Post of Maastricht University in the Netherlands, whose team created the first lab-grown burger two years ago out of muscle cells derived from cow stem cells.

While this "cultured beef" may be more sustainable – the initial stem cells are harvested from cows' necks without killing them – it remains a shallow substitute for the real thing ("dry and a bit lacking in flavor," the New York Times reported). But Post hopes to take a page from biomedical engineers who have been trying to print organs for transplants. Real animal tissue is complex and made from different kinds of cells -- not only muscle, but also the vascular cells that make up blood vessels, for instance. Such cells could be printed in layers.

Compared to printing a healthy organ that must function in a living person, printing a steak in all its complexity should be easier. But it hasn't been done yet.

As Post continues his work, Kickstarter, an online platform that helps projects get funded through many small donations, has given birth to a range of specialty printers marketed to food connoisseurs with a bit of money. PancakeBot sketches patterns -- albeit two-dimensional ones -- in batter on a griddle. Then there's Bocusini, a microwave-sized machine expected to cost a few thousand dollars that can craft out of marzipan a replica of the steamboat piloted by Mickey Mouse in the early Disney cartoon Steamboat Willie.

"We think it's a cool tool for chefs to do things that aren't possible to do with their hands, for example fine lines and sharp 90 degree angles," said Melanie Senger, a food scientist with the company developing Bocusini in Germany, Print2Taste.

Chocolate makers have taken a keen interest in printing customized confections. CocoJet, built by the veteran 3D printer manufacturer 3D Systems for the Hershey Company, can transform digital models created on a computer into desserts with elaborate geometries. So can Focus, a portable printer made by 3D By Flow that works not only with chocolate but also with caviar and hummus.

3D By Flow also hopes to send its printers into space to provide tastier astronaut chow for long-duration space missions. Talks have begun with Mars One, a nonprofit organization in the Netherlands with the stated goal of setting up the first human colony on the Red Planet. NASA has already put money into a similar enterprise; funded by the agency, mechanical engineer Anjan Contractor built a printer that reconstitutes and assembles freeze-dried ingredients to make space pizza.

Long-term, many of these companies aim to scale up their devices.

To this end, 3D By Flow claims to have teamed up with a company they won't name but describe as the "world's largest chocolate maker." "We are working together to create the first industrial-scale chocolate printer, and this will be complete later this year," the team wrote in an email.

But competing with the industrial automatons that prepare foods today will require a significant leap in speed. 3D printers have a reputation for being slow. Barilla's prototype, for instance, takes 45 seconds to craft a single piece of uncooked pasta. Meals for the German nursing home can be assembled by a single machine at a rate of only 10 to 20 per hour.

"Speed is all important," wrote Jan Andrzejewski, who created a device called the Rotruder that uses 3D-printed plastic molds to form desserts quickly instead of 3D printing the food itself. "If the response to the chef asking how long till the 3D-printed item made from freshly mixed ingredients will be is 'about another 20 minutes, chef,' all hell would break loose."

New machines in the works give reason to be hopeful that 3D printing will speed up. One project called Gizmo 3D aims to print objects in mere minutes instead of the hours it can take with today's printers. So does another project still under development, Carbon3D, which has the stated goal of constructing plastic items 25 to 100 times faster than is possible with current techniques.

Whether faster technologies will succeed -- and be adapted for food -- remains to be seen. "Increasing the speed is going to be a big challenge for us," said van Bommel. "But we think it will be possible."