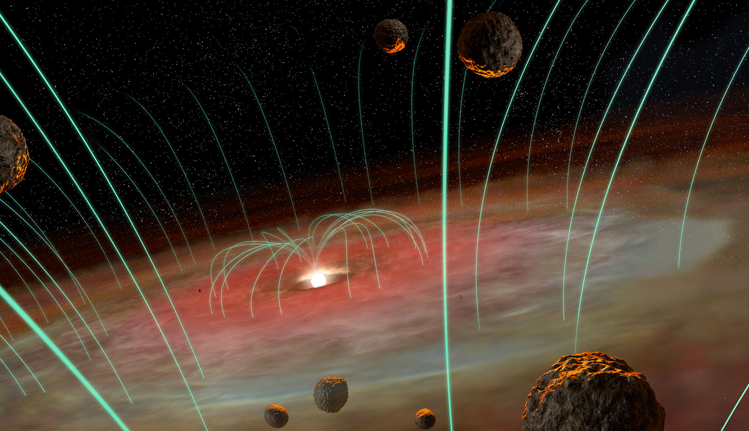 Artist depiction of a protoplanetary disk consisting of a central star surrounded by a gas cloud permeated by magnetic fields. Objects in the foregrounds are millimeter-sized rock pellets known as chondrules, which are the subjects of this study.

(Inside Science) -- An ancient meteorite has now yielded the first physical evidence that intense magnetic fields played a major role in the birth of our solar system.

Shortly after the sun formed about 4.6 billion years ago, a rotating disk of gas and dust that surrounded the newborn star coalesced into the planets that children now memorize. Astronomers peering at young distant stars find these protoplanetary disks usually disappear relatively quickly, in 5 million years or less.

"Magnetic fields can introduce viscosity into the disk, essentially making the gas in it more sticky," said lead study author Roger Fu, a planetary scientist at MIT in Cambridge, Massachusetts. "This means gas of differing orbits interacts more strongly with each other, and more gas falls toward the star."

To look for signs of these primordial magnetic fields, researchers investigated the so-called Semarkona meteorite, a rock weighing about 1.5 pounds that crashed in northern India in 1940.

"It's a very primitive meteorite, which means that since it formed about 4.5 billion years ago, not much has happened to it," Fu said. "This means it preserves the properties it had when it first formed, helping shed light on that time."

Semarkona is made up mostly of tiny round pellets known as chondrules, which formed as molten droplets that quickly cooled in space. The scientists focused on chondrules that possessed iron-bearing minerals known as dusty olivine crystals — if a magnetic field was present as these chondrules were cooling, the magnetic properties of these crystals might have recorded the strength of these magnetic fields.

Researchers have searched meteorite samples for evidence of magnetic fields in the primordial solar system with little success since the 1960s.

"Most other meteorites were altered in some way that would remove their original magnetization — maybe they were heated, or water flowed through them, or they experienced high pressure from impacts," Fu said. "Semarkona is one of the few meteorites we know of that avoided all of these things."

Still, analyzing the magnetic signatures of these chondrules was not easy. The pellets were at most about one-fiftieth of an inch (500 microns) wide, or roughly five times wider than the average width of a human hair. In addition, the magnetic signatures were very weak, requiring the use of a microscope that employs a superconducting quantum interference device, the most sensitive kind of magnetic field sensor.

The scientists discovered the chondrules were magnetized in a field roughly 54 microtesla in strength. This is about as strong as Earth's magnetic field, and up to 100,000 times stronger than what exists in interstellar space today.

"This is the first direct information we have on the magnetic fields in the early solar system," said astrophysicist Mordecai Mac Low at the American Museum of Natural History in New York City, who did not participate in this study. "It's a really difficult measurement that was very cleanly performed — it stands out as a real tour de force."

This discovery "tells us that magnetic fields were large enough to be important in the accretion process that helped form the solar system," said astronomer Meredith Hughes at Wesleyan University in Middletown, Connecticut, who did not take part in this research. "We had guessed that, but we had no evidence of that until now."

These findings also yield insights on the as-yet-mysterious way in which chondrules form, which in turn may shed light on how planets arise, the researchers said. They found the meteorite's chondrules probably formed either as molten debris from the collisions of rocky bodies or from dust particles within gas melting together when they were compressed by a shock wave. It was unlikely they formed via electric currents, hot winds and other events that occur near the sun, because such events are believed to take place within magnetic fields stronger than 100 microteslas, far greater than what is seen with Semarkona.

"This information can help reveal where material was located for planet formation, how much was there, how long it stuck around, and how it changed over time," Hughes said.

Future research could analyze meteorites from different times and places during the formation of the solar system. This could shed light on the nature of the magnetic fields in protoplanetary disks — whether gas was driven toward the sun by a turbulent pattern of magnetic fields or a more orderly, hourglass-shaped configuration of magnetic fields, Fu said.

The scientists detailed their findings online Nov. 13 in the journal Science.