Sighting may help improve understanding of the early universe.
Image 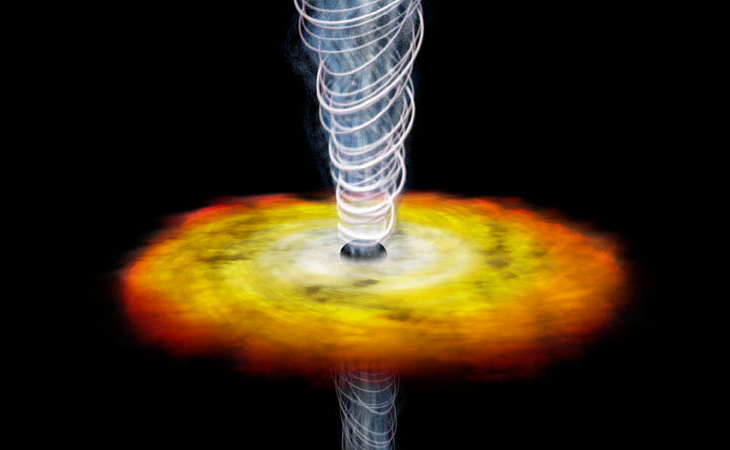 An artist's impression of an active quasar.

(ISNS) -- Scientists in Australia believe they've identified a quasar in the process of lighting up, for the very first time.

This discovery could help scientists answer lingering questions about how these exceptionally bright celestial bodies form, and how they helped the ancient universe shape today's galaxies.

"I don't think we've really seen one of these objects in this stage," said Ray Norris, an astrophysicist at the Australia Telescope National Facility and leader of the research team. "We don't understand how they evolve or form."

Quasars are mostly found in far reaches of the ancient universe. Some formed only a few hundred million years after the Big Bang, making it difficult to observe their creation.

Though quasars shine, they're not stars. They're intensely bright spots near the edges of supermassive black holes. While no light can escape from a black hole itself, its accretion disk -- the churning mass of dust and gas spiraling down into the black hole -- can shine brightly.

As dust and gas fall into the black hole, the mass speeds up, like water draining down a whirlpool. Simultaneously, matter smashes against other matter also falling into the black hole and heats up due to friction. Once the hot material is corkscrewing downward near the speed of light, it reaches millions of degrees and energized charged particles shoot off in enormous jets perpendicular to the spiraling disk.

These jets can be hundreds of thousands of light years long, and emit powerful radio signals that can be heard by receivers billions of light years away. Norris and his team think that they've found two quasar jets just starting up after the collision of two galaxies. These "new" quasars actually formed about 3.2 billion years ago. Their radio signals are just now reaching Earth.

"These two spiral galaxies are crashing into each other, there's all this debris going everywhere and right down at the middle is this black hole with these enormously powerful jets which are blowing their way up," Norris said of the radio source located in the Southern Hemisphere constellation Tucana the Toucan.

The jets are still relatively small, only a few thousand light years long, and remain completely enveloped by the dust and debris from the two galaxies. The dust and gas keep their source mostly obscured from visual and infrared telescopes, but their radio signatures are making it through. That dust and gas won't be there for long. The two jets are burrowing through their gaseous envelopes, dispersing them in the process.

"What we have here is the very early stages," Norris said. "When it bursts out it will indeed unearth the fully fledged quasar."

"Usually these very deeply obscured galaxies are not associated with having radio jets," Spoon said "To actually see a galaxy that is still deeply buried, where the collision is ongoing, where the jets are still buried, that may be unique at this point."

Spoon said that it was also remarkable because of its relative proximity to Earth -- for a quasar.

"These kind of sources are so rare in the local universe, we are happy that this one exists," Spoon said. "Collisions between galaxies occurred much more frequently in the early universe."

Astrophysicists are intrigued by Norris's results, however they are also cautious.

"It's really not a slam dunk yet, but it looks exciting," said Martin Elvis, a scientist at the Harvard-Smithsonian Center for Astrophysics in Cambridge, Mass. "They really need better data."

Norris and his team are working on getting more data about the burgeoning quasar. He applied for time on the Atacama Large Millimeter/submillimeter Array radio telescope in Chile hoping to get a better picture of the two jets, and has presented his results at several scientific conferences.

Understanding how a quasar grows and matures could answer lingering questions about how the universe began to take shape billions of years ago.

In 2005, scientists at the Max Planck Institute in Germany, developed a supercomputer-based simulation to recreate the evolution of the universe.

"It was actually successful; it reproduced many of the main futures of the universe," Norris said.  "But some things didn't work, and in particular it shows galaxies much more massive than we see, they grow more quickly and there should be more of them than we're seeing. Something is slowing down the process of galaxy formation."

Astrophysicists now think that the gigantic plumes from quasars heated up the swirling dust and gas in primordial galaxies. Hot gas can't coalesce into stars as efficiently as cold gas, slowing star formation as a result.

Norris hopes that by observing the formation of a quasar and its jets, they can better understand whether quasars first helped to form galaxies or vice versa.

"Hopefully we'll find many more examples of these," Norris said, "If we get enough objects, all at different stages, we can then see how one evolves into another."

These results are described in a paper posted on the arXiv website.