The Deadly Fungus Frogs Brought To The US 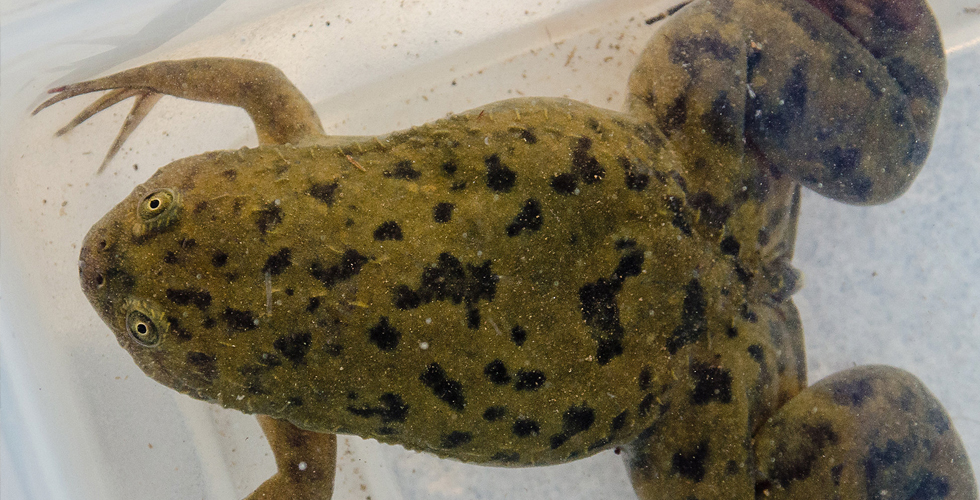 (ISNS) -- African frogs once imported to laboratories and hospitals around the world may have carried with them a devastating fungal infection thought to be responsible for a rapid, global decline in amphibians, according to new research.

The fungus is called Batrachochytrium dendrobatidis, or Bd for short. Amphibians have been dying in large numbers in every continent except Antarctica since the late 1980s and this fungus has been blamed as a large contributing factor since the late 1990s. But researchers haven't proven how Bd could have spread so quickly from Africa, where it was first found in the wild in the 1930s.

The new research, published online May 15 in the journal PLOS One, strengthens the ties between the proliferation of the disease and the worldwide spread of Xenopus laevis, the African clawed frog. The frogs were popular in the early- and mid-20th century for use in pregnancy tests. Scientists still use them in laboratory experiments.

To begin building their own colonies of the easy-to-keep species, hospitals or laboratories would order a few frogs from Africa, said study lead author Vance Vredenburg, a conservation biologist from San Francisco State University.

Before doctors could reliably and directly measure human hormone levels, they would inject a small amount of urine from a woman who might be pregnant under the skin of the frog. Days later, checking if the frog had ovulated would accurately reveal if the woman was pregnant.

After modern pregnancy tests became established, around the late 1960s, some of the people who maintained the frog colonies probably released them in nearby ponds or other waterways, said Vredenburg, accelerating the spread of the frogs -- and the disease.

The new study suggests the frogs were carrying a fungal pathogen, Bd. The African clawed frog can act as a carrier of the fungus without developing symptoms, but Bd is deadly to most other amphibians. When an infected frog reached a new location, it brought with it the fast-reproducing fungus. Bd affects the skin of amphibians and interrupts vital functions such as the absorption of water and gases, which leads to death.

The destruction of prime habitat is a major cause of amphibian decline and extinction, but the fungus is causing deaths even in pristine habitats.

"Here in California, it killed 99.9 percent of the populations of frogs in the mountains," said Vredenburg. "It's driven literally hundreds of species of amphibians to extinction in other parts of the world."

Vredenburg's team analyzed 201 museum specimens of African clawed frogs, including many gathered in Africa and held in California. They found that two frogs gathered in Africa in 1935 had Bd, as did frogs collected decades later in the wild in California. Because these wild populations could have only reached the state by importation from Africa, the scientists believe this fortifies the connection.

"We're making that link a little tighter," said Vredenburg. "That could be the explanation, or one of the pathways anyway, for this pathogen to get to the New World."

The study used preserved specimens, so to find evidence of the fungus, the scientists had to analyze something that could endure the preservation process. They settled on a small genetic marker that is very small and specific to the Bd fungus. They took swabs from each frog's skin and extracted the DNA.

"It's a good, very interesting piece of work and it backs up what we have already known from other studies," said Matthew Fisher, an evolutionary epidemiologist at Imperial College London who studies Bd and other fungi. "But it takes it further because it shows that this is happening in the United States."

Fisher said that Vredenburg's team needs to take one more step to be certain -- prove that the form of Bd that's killing animals in California is the same type that they've found in their samples. This could be done by comparing the genomes of the Bd found in the museum samples to the Bd that's killing frogs in the wild, said Fisher.

Regardless of how the fungus began spreading, stopping it from spreading farther could be difficult, despite efforts to restrict the movement of amphibians between countries. Vredenburg said he's been studying bacteria with antifungal properties that live on some amphibians' skin, and seeing if they could be transplanted onto amphibians that are susceptible to Bd. These antifungal agents could augment their defenses.

"We're doing experiments where we're actually doing bio-augmentation," said Vredenburg. "We're taking the lead from a lot of the work that's been done on humans."