Tips from physics, physiology, and maybe even music can help you improve your score.
Image 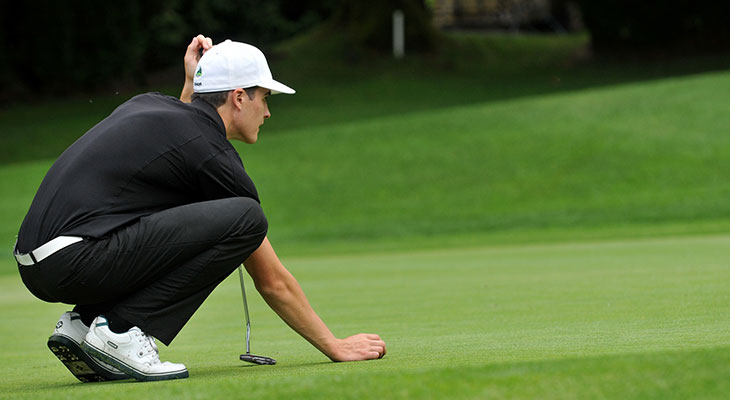 (Inside Science) -- "Drive for show and putt for dough."

In the world of professional golf, this catchphrase means that a perfect drive down the middle of the fairway has little value if the golfer can't complete the hole by sinking a sinuous 10-foot putt into the cup.

As they prepare for the U.S. Open championship, starting on June 18 in Chambers Bay, Washington, players will devote at least as much practice time to reading the greens, pacing their putts, and maintaining a steady hand with what they call their "flat sticks" as they do to those 300-yard drives.

"Putting is 43 percent of the game," said Ty Waldron, director of instruction at Pelz Golf, a company that offers golf schools and clinics. "It's something that separates recreational golfers from the best in the world."

In recent years several studies have revealed the underlying scientific principles of good putting. Elite and weekend golfers alike can use the principles to improve their chances of sinking those tricky 10-footers.

Robert Grober, a former physics professor at Yale University in New Haven, Connecticut, who says he "studies golf as a hobby," has expanded on the well-known axiom that putters should aim for a point just beyond the hole.

“Don’t just look at the putt at hand,” he advised. “Take a step to the left and another to the right, and look at the putts from those points. You’ll note that the lines meet above the hole.”

The lines from an ensemble of putts, he added, form a diamond area beyond the hole. That’s the aiming area for the putt. Just as the hole looks smaller as the distance from it increases, the size of the diamond becomes smaller as the length of the putt increases.

Grober also analyzed an observation that the stroke of really great putters moves twice as far on the backswing as the downswing. From the physics point of view, he said, the stroke "can be described as the motion of a pendulum driven at twice its natural frequency."

Practically, he said, swinging resonantly means using the same force for the backswing as for the downswing.

Another critical factor in putting is the need to keep the putter square to the ball as it moves forward.

According to Waldron, Perfy demonstrates that the golfer's hands should be under his or her shoulders to swing the putter back and then forward to strike the ball – and that the motion isn't contrived or unnatural.

An analysis of putting by Raymond Penner, professor of physics, engineering, and astronomy at Canada's Vancouver Island University, has produced a counterintuitive result.

"The probability of making a downhill putt is much greater than the equivalent uphill putt," he wrote in the Canadian Journal of Physics. However, he pointed out, most golfers would prefer to putt uphill after they miss a putt.

The goal of perfecting putting through science relies on more than physics.

"These refer to the periods immediately before the execution of the putt," explained Mark Smith, leader of the Psychophysiology of Exercise and Sport Performance research group at the University of Lincoln in the United Kingdom. At this crucial time, golfers narrow their focus to the putter and the ball.

"Evidence reveals that reducing the variability of your gaze increases the likelihood of successful putts," he said.

One recommendation that involves that understanding: Spend about two seconds during the stroke concentrating on the ball and continue staring at the same spot on the ground after striking the ball.

1. Aim for an area just beyond the hole.

2. Keep an even balance between your toes and heels while you putt.

3. During the stroke, concentrate on the ball, then keep looking at the same spot after striking the ball.

4. Use optical illusions to make the hole look bigger.

Studies of putters' postures also promise to save strokes.

“The correct body position [as you line up the putt] is one of the key aspects in developing a consistent and efficient golf movement,” Smith said. “We need good balance at address and even better balance throughout the movement.”

To determine the body position that provides the best balance, golf scientists have used scanning technology that measures the pressures under golfers’ toes and heels as they address their putts. Tournament professionals, Smith said, have a much more even distribution of pressure from heel to toe and left foot to right as they putt.

That approach translates into better putting performance. However, Smith noted that this type of analysis is still in its infancy.

Some scientific studies take an entirely different view of putting.

A team at Clarkson University in Potsdam, New York, headed by assistant professor of physical therapy and physician assistant studies Ali Boolani, examined the benefits for 22 elite college golfers of listening to music while putting. The team’s conclusion, reported in the Journal of Athletic Enhancement: Any kind of music boosts putting performance. But jazz works better than any other genre.

So if you still have the yips after applying physics and physiology principles to your putting, you might try adding earbuds to your golf bag, and downloading some Louis Armstrong before heading to the course.