Of Mice And Magnets 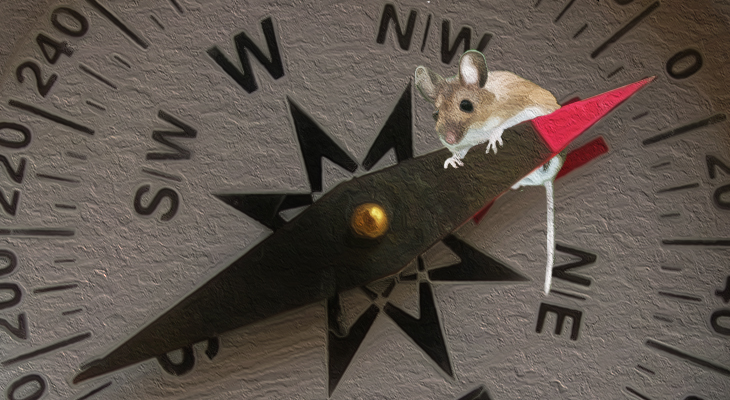 (Inside Science) -- Quantum mechanics governs the quirky, counterintuitive way the world works at the small scales of atoms and subatomic particles. It might also be important for helping animals understand their place in their surroundings. New research suggests that wood mice, commonly found in Europe, have a built-in compass that exploits quantum processes, the first seen in a wild mammal.

According to a study in Scientific Reports published on April 29, wood mice placed in a container prefer to build their nests in the parts of the container closest to magnetic north and south. When researchers created an artificial magnetic field, the mice nested in line with the new north-south orientation. Scientists suspect that this compass sense comes from electrons dancing around in the mice's eyes.

This represents the first evidence found in a wild mammal for a magnetic sense that relies on effects at the quantum level. Previous research hinted at the presence of such a sense in lab mice, but that didn't necessarily indicate the same process would happen in wild animals.

When it comes to the magnetic sense, "we know next to nothing about mammals," said Thorsten Ritz, a biophysicist at the University of California, Irvine, who wasn't involved with the study, "so this is something new here."

From birds to bees to bacteria, many life forms can sense Earth's weak magnetic field, helping them navigate their environments. Among mammals, however, researchers had found magnetic senses only in mole rats, bats and similar creatures specialized for navigating in the dark.

"It makes sense that [those animals] use a magnetic compass to navigate," said Pascal Malkemper, a zoologist at Germany's University of Duisburg-Essen and the study's lead author. But it was an open question whether or not mammals that live in the light also had this ability, leading Malkemper to test an everyday European furball: Apodemus sylvaticus, the wood mouse.

In the summer and fall of 2013, Malkemper exiled himself to a horse stable in the Czech Republic's Bohemian Forest, far from technology that could potentially throw off his sensitive measurements. He caught 45 mice one by one and placed each one overnight in its own cylindrical container filled with materials such as sawdust and hay, which the mice used to build bed-like nests against the container's rounded walls. After releasing a given mouse the next day, Malkemper measured the compass direction of the nest each mouse left behind relative to the center of the container's circular floor. When he did, he found that the mice had spontaneously snuggled up against the walls that corresponded to magnetic north and south. When he used electromagnetic coils to artificially change the magnetic field's orientation, they moved their nests.

But how does the mouse's compass actually work?

In some organisms, such bacteria, trout and mole rats, magnetic compasses seem to work like the ones Girl and Boy Scouts carry around, relaying direction via magnetic iron crystals that twist and turn like compass needles. But in other creatures, such as birds, there's evidence for a totally different compass that relies on quantum processes. According to theoretical models and computer simulations, light entering the eye activates certain proteins in the retina, temporarily ripping apart a pair of electrons in those proteins. Separating the electrons makes them sensitive to magnetic fields, which "sets up a particular chemical reaction [that's] essentially a switch," said Ritz.

The electrons wobble like spinning tops. Changes in the magnetic field's direction affect each electron's wobble slightly differently, influencing their orientation relative to each other. This change in relative alignment determines whether the electrons will reunite quickly or slowly, flipping the switch toward one of two different sets of chemical products. By tracking the ratio of these different products, an organism can use these proteins as little quantum compasses.

This exotic compass has its quirks. Place a bird in a magnetic field that's flipping its north and south poles millions of times per second, and the electrons in the animal's compass get thrown off, like disturbing a spinning top by repeatedly banging on the table beneath it. This magnetic drumbeat dramatically impacts where the compass points -- or if it works at all. Animals with iron compasses don't seem to have this problem. It's thought that the iron crystals involved are too tied down to the surrounding tissue to detect these split-second 180s. This difference made oscillating magnetic fields the perfect tool for figuring out which kind of compass the mice were using.

Malkemper thinks the oscillations change how the mice "see" the magnetic field. "If [the magnetic sense] is based in the eye," he said, "we're thinking that it's an aid to see a magnetic field [as] a pattern in a specific direction." When the oscillating field gets added, this familiar visual pattern might shift, causing the mouse to orient differently.

Theorists see the study as a solid, early step toward a better understanding of the quantum compass, which has also been observed in amphibians. In fact, Klaus Schulten—the University of Illinois at Urbana-Champaign biophysicist who first hypothesized this compass setup -- said that "there is no element of surprise" to Malkemper's discovery, given what's been found already in non-mammals.

Researchers aren't completely sure how sensing magnetic fields benefits mice, but John Phillips, a biologist at Virginia Tech and one of the study's coauthors, thinks it helps the mice assemble their everyday movements into "a coherent map of the world they know," he said. "Nothing that we know about spatial processing in rodents has provided the global reference system [they] need," he said, suggesting that the poorly understood magnetic sense might be involved.

The discovery underscores that animals' compasses aren't just used for large-scale navigation. Unlike migratory birds and sea turtles -- which seemingly use their magnetic senses to migrate thousands of miles -- the average wood mouse lives in a home range about 500 feet across.

"The idea that the magnetic sense is…unique to animals that travel long distances is unambiguously wrong," said Phillips. "This is pioneering work, and it just opens up a raft of new research."

Questions remain. For one, the mice kept orienting toward magnetic north and south when exposed to a magnetic field oscillating about 1.3 million times per second, but this same field disoriented birds in previous experiments. Researchers won't know precisely why until they nail down the mouse's specific pathway for sensing magnetic fields—a bit of biological detective work that hasn't been completed in any animal.