Find out how your shirt or jeans pocket could charge your smartphone.
Technology
Marsha Lewis, Contributing Producer

(Inside Science TV) – Every day, millions of Americans rely on electronic devices that have one thing in common: they must be charged. The process is pretty simple, but it does require a bit of time and forethought.

But what if there were a better way to store and create the power needed to run these gadgets?

“You know that electrical cables are everywhere? How about converting these electrical cables into energy-storing devices as well,” asked Jayan Thomas, a nanotech engineer at the University of Central Florida in Orlando.

To do that, Thomas and his team take a copper wire and cover it with billions of teeny, tiny nanowires and create layers that are glued together. The result is a wire that can create energy on the inside layers and store it within the outside layers. 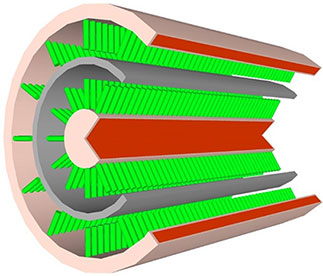 The device is able to power an LED light.

Creating and storing energy in a small wire could save a lot of space and make heavy batteries a thing of the past.

The technology could also increase the lifespan of the battery. A typical battery can be recharged about one-thousand times before it dies for good. This device could be recharged tens of thousands of times.

“The thing is, if we have a lot of nanostructure, it will give us a lot of surface area, which is good for our energy storage," said Zenan Yu, a graduate student at the University of Central Florida.

The new wire could someday be used to power electronics, electric cars, trains or planes. It could even be stitched into fabrics allowing smartphones to be charged by your clothes.

“They simply put their smart phone in their pocket, so they can charge their devices,” said Yu.

Get Inside The Science: