Using reflected light to compare chemical makeup of moon and other asteroids.
Image 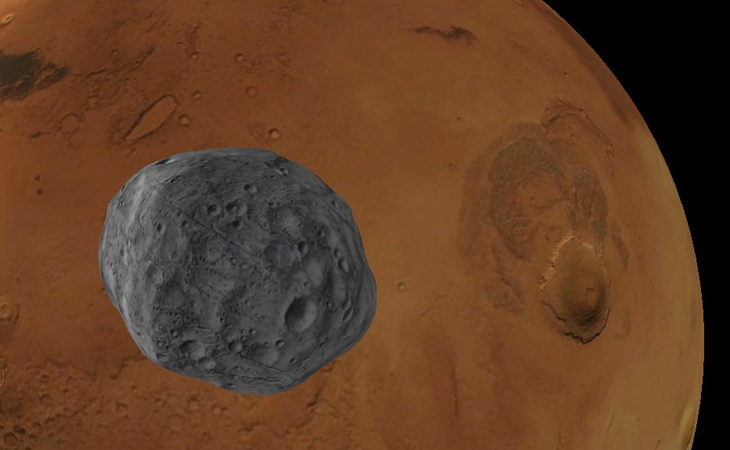 Phobos, with Mars in the background

(ISNS) -- New research suggests that Mars' larger moon, Phobos, is likely an errant asteroid trapped by the planet's gravitational pull. Astronomers matched the chemical makeup of Phobos' surface to a meteorite that struck Canada, concluding that the Martian moon likely started out as a carbon-rich, "D-type" asteroid that drifted too close to the red planet.

These new results are a step towards settling the mysterious origin of Mars' moons.

"Phobos is really one thing that is pretty freaky about the inside of the solar system," said astronomer Maurizio Pajola of the University of Padova, in Italy, and lead author of the study.

His team relied on spectral data, information obtained by examining sunlight that bounced off Phobos. Whenever light hits an object like an asteroid, different elements absorb a few individual wavelengths, and reflect the rest. Scientists can figure out the object's chemical makeup by looking at what bands of reflected light are missing.

Pajola and his team used spectral data of Phobos taken by the European Space Agency's Rosetta probe in 2007, and compared it to a D-type asteroid known as 624 Hektor. Then, the team went a step further, and compared Phobos' data to a meteorite that hit Canada's Tagish Lake in 2000, also thought to be a D-type asteroid.

"We are trying to understand what kind of mineral composition is possible," Pajola said. His team found that Phobos closely resembled the D-type asteroids.

Both of Mars' moons, Phobos and Deimos, are among the smallest moons in the solar sytem. There are two main schools of thought about where the pair of potato-shaped moons came from. Asteroids are a popular explanation in part because Mars sits at the edge of the solar system's asteroid field.

"There is still a very lot of controversy. They certainly look like asteroids," said Geoffrey Landis, a scientist from NASA's John Glenn Research Center, in Cleveland, who was not connected to the research. "Not only does it look like an asteroid, it looks like a specific [type of] asteroid."

However, a captured asteroid would likely have an orbit that is highly elliptical, looking more like an egg than a circle. Instead, Mars' moons have almost perfectly circular orbits.

"With a captured asteroid it could be in any orbit whatsoever," Landis said.

The second theory is that the moons formed from dust orbiting Mars after its formation, or possibly from debris kicked up after a huge meteorite struck the planet. However, if that were the case, Mars' moons should be made of the same stuff as the planet itself, but Phobos' spectra more closely match D-type asteroids.

Pajola and his team also developed a scenario based on orbital dynamics to explain the unusual round path of Phobos as well. According to their calculations, if it collided with another asteroid at just the right point, that could knock it into its circular orbit.

"From the surface it's a D-type [asteroid]. From the dynamical point of view, it can also be a captured asteroid," Pajola said.

Pascal Rosenblatt of the Royal Observatory of Belgium is still unconvinced. He is a proponent of the theory that the moons formed from debris ejected from a meteorite impact. He said that that a scenario where two bodies collide near Mars and one gets captured was not impossible but highly improbable. What was needed, he said, was for the researchers to go even farther back, to see if it was possible for two asteroids to be on such a collision course near the planet in the first place.

"Pajola et al. have added computation about the collisional-capture, which is something new for Phobos," Rosenblatt wrote in an email. "But they did not provide convincing mechanisms at the origin of this collisional event."

He added also that while the spectra taken by the Rosetta spacecraft was a close fit with the Tagish Lake meteorite, there were a few points where the two didn't match perfectly.

"[I]t's one more piece of the jigsaw puzzle," said Landis. "This paper did a pretty good job at the very narrow question they were looking at, i.e. 'What is the spectrum of the Martian moon?'"

He said it was possible that a layer of asteroid dust on the surface of Phobos could explain the surface spectra, while underneath it could be made of something else entirely, though he was a proponent of the asteroid capture theory.

The next step would be to analyze a sample of the moon itself. Russia announced in October it intends to send a probe to Phobos by 2022, and will likely carry a small lander and sample return capsule.

Pajola and his team's research was published in the November 10 issue of The Astrophysical Journal.