On the fifth anniversary of giant Gulf oil spill, a look at new remediation technology.
Image 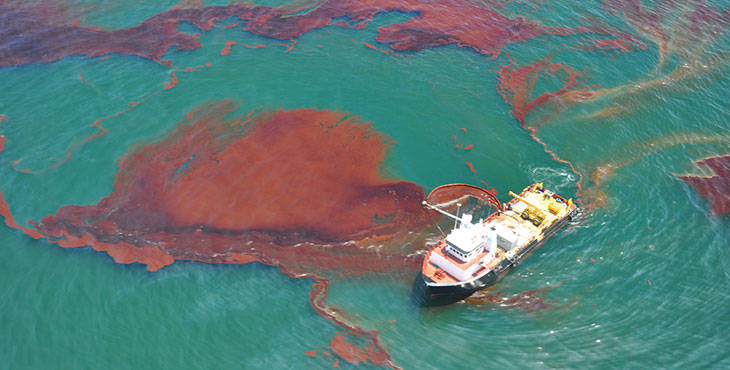 (Inside Science) -- The Deepwater Horizon oil rig exploded in the Gulf of Mexico five years ago today, killing 11 people. The leak that followed spilled millions of barrels of oil, creating one of the worst environmental disasters ever.

During the Deepwater Horizon disaster, cleanup workers used a number of methods to reduce the spill's impact, including boats that skim the oil off the gulf's surface, chemicals that disperse the oil, oil-absorbing pom-poms, and even burning. Now, researchers have developed a new potential tool: a high-tech coated mesh that separates oil from water with the ease of a sieve.

"There's only so much oil you can absorb," said materials scientist Bharat Bhushan of The Ohio State University. "What we try to do is rather than absorb it, we try to separate the two."

To make an oil-separating sieve, Bhushan and Philip Brown, a materials scientist also of Ohio State, took a stainless steel mesh and made it bumpy by coating it with nanoparticles sandwiched between two layers of polymers. Then, they covered the mesh with a fluorosurfactant, a type of chemical that attracts water but repels oil.

Those nanoparticle bumps are crucial because they increase the surface area of the mesh, which in turn enhances the outer layer's oil-repelling properties. It's a trick the researchers borrowed from the lotus leaf, whose waxy and bumpy surface repels water. In the end, they get a mesh that's really good at letting water flow through -- but not oil.

The research was published in the journal Scientific Reports.

You could then make the mesh into a big net to ensnare spilled oil. Or, Brown envisions using the mesh as a filter. Clean up crews could pump the contaminated water through it. The materials in the coating are environmentally friendly and cheap, Bhushan said, potentially costing as little as a dollar per square foot. And unlike other oil-repelling coatings that break down quickly, initial tests show that this one's durable, which would enable a coated mesh to be reused over and over again.

"It's another kind of nanotechnology for dealing with oil-water contamination -- that's what makes it exciting," said Perena Gouma a materials scientist at the State University of New York at Stony Brook. She's glad to see new approaches for cleaning oil spills using nanotechnology.

But one thing to determine is how well the mesh can clean water.

"The eye may not see the oil, but is the oil still there?" she asked. Benzene or other oil products can still lurk inside what looks like clean water. For her part, Gouma is commercializing her own oil-cleaning mesh, a nanoscale grid of copper tungsten oxide that you place on the contaminated water. But instead of separating the oil, the grid breaks it down when exposed to sunlight.

It will still be a few years before Bhushan's oil-separating mesh is ready for real-world use, and engineers will have to figure out how best to deploy it. For one, they will have to design a coated mesh that's strong enough to survive the open ocean, said Ed Levine of the National Oceanic and Atmospheric Association, who works with the Coast Guard to clean up oil spills, including the Deepwater Horizon spill. At least in the beginning, a net might be best suited for calmer, more controlled settings like in a lake.

If the mesh is used as a filter in a pump, however, the advantages aren't quite clear. A boat equipped with such a pump might not be much better than current methods that vacuum or skim the water for oil, Levine said.

In the meantime, the Ohio State researchers are also developing their technology for uses other than oil cleanup. The coating could make surfaces resistant to oily dirt or finger smudges. The nanoparticles are made from silica, one of the ingredients of glass, which allows the coating to be 70 percent transparent—not quite good enough for smudge-free screens, but maybe sufficient for smudge-free mirrors. And if you swap out the top, oil-repelling layer with a water-repelling one, you could make mirrors that don't fog up or get icy.

But if the mesh is used for oil spills, it will always be one of many techniques.

"There's no one silver bullet," Levine said. "It's not like we have one oil spill and we say, bring out the mesh, and we don't need anything else." That's because oil spills -- especially in the ocean -- happen in all kinds of weather, water, and temperature conditions. Then there's the oil.

"Oils come in very different viscosities, from thin as water to thick as peanut butter," he said. Every situation requires different tools; innovations are always welcome.