Gamma rays could improve screening for nuclear and other hazardous materials.
Image 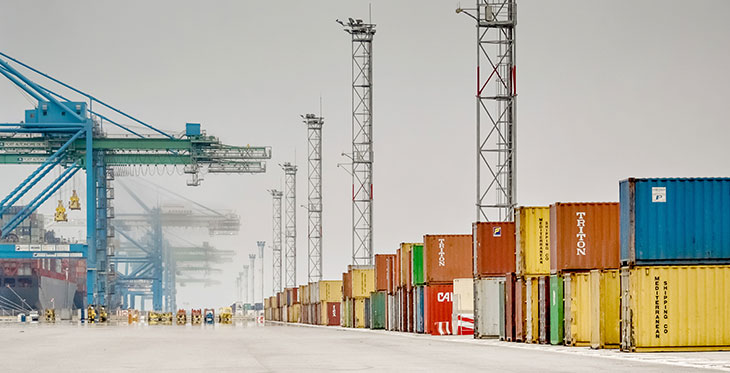 (Inside Science) -- It is the stuff of scientists' nightmares and science fiction writers' plot points: a nuclear weapon is slipped into the U.S. on a cargo ship and detonates, destroying an American seaport and killing a million people.

Indeed, in the movie version of Tom Clancy’s book, The Sum of All Fears, a smuggled bomb destroys Baltimore.

Earlier this month, physicists -- gathering in Baltimore -- at an American Physical Society meeting, described a new way to detect an atomic bomb in cargo that might have saved the fictional version of the city. It involves blasting precisely tuned gamma rays at freight containers and seeing what passes through a detector.

The fear is legitimate, said Areg Danagoulian, an assistant professor of nuclear science and engineering at the Massachusetts Institute of Technology in Cambridge, one of the presenters. Some 60,000 containers are shipped into the U.S. on gigantic freighters every day. According to Lawrence Livermore National Laboratory, West Coast ports handle eight of these containers a minute.

The technology, non-intrusive inspection imaging, was used last year on 99.8 percent of containerized cargo entering seaports and 100 percent of cargo coming through commercial trucking, according to Anne Sittmann, a spokesperson for the U.S. Customs and Border Protection at the Department of Homeland Security.

Yet there are several sources for the nuclear material to build an atomic bomb and smuggle past these security measures, Danagoulian told the meeting attendees.

Approximately 16,000 nuclear warheads exist in the world today, "ten times more than would be needed to destroy planet Earth," he said. Another source of nuclear material could be fuel once intended to be used for power, intercepted and refined to weapons grade, something now feared from Iran.

Either way, terrorists could get their hands on the materials needed to build a bomb.

It would not have to be a large bomb, and would not be hard to hide, he said. One weapon, a little over a foot long (40 cm) and weighing about 40 pounds (20 kg) would fit in a heavy backpack and would produce a force of one kiloton of yield. Japan's Hiroshima and Nagasaki were destroyed by bombs of 16 and 21 kilotons.

The current system -- passive radiation detection -- sends radiation through the containers, and can detect a dense metal such as uranium inside a container. Security people see an image but the technology doesn't identify the material. It cannot distinguish between metals.

Shielding the material from detection with lead, for instance, also would be relatively easy.

Danagoulian and researchers at MIT, Georgia Institute of Technology in Atlanta and Pennsylvania State University in University Park, make use of precise gamma rays, high-frequency electromagnetic radiation like x-rays. The researchers used a linear accelerator at MIT to study a reaction between boron and a form of hydrogen called deuterium. The reaction releases radiation at two fixed energies, 4.4 and 15.1 megaelectron volts (MeV).

Heavier metals, which have more protons in their nuclear cores -- in other words, higher atomic numbers -- absorb more of the 15.1 MeV gamma rays than the 4.4 MeV ones, so the researchers could, in some instances, tell one metal from another. The researchers did not present data for a radioactive heavy metal such as uranium. But because of uranium's high atomic number, the researchers said the technique should work well.

The process of using uranium also would produce a controlled-nuclear fission reaction that would not explode. However, it would release neutrons that could in principle be detected and provide additional evidence of nuclear material.

No device has been built yet. The report was called a proof of concept -- if we try it, it probably will work.

Others scientists are skeptical. It would still require a huge amount of radiation to scan a full cargo container, said Christopher Morris, chief scientist and head of the Los Alamos Muon Tomography Team. Morris has a patent on technology with a similar goal.

A cargo container would be nine feet thick or two-and-a-half meters, he said.

"If you fill up a cargo container from bottom up with frozen peas, the thickness of the peas is two-and-a-half meters. To see through that much material requires enormous doses. It requires incident lethal doses of radiation," and inspectors would have to be shielded from them.

"There's an awful lot of cargo you can't see through with any existing x-ray scanners," he said.

Sittmann at DHS said Customs and Border Protection has been using imaging technology since the Sept. 11 attacks in 2001 and understands the current technologies, including its limitations. DHS and technology companies are working on "technology that will scan cargo more effectively and more efficiently," she said.