Objects Beyond Cosmic Voids Not As Bright As They Appear 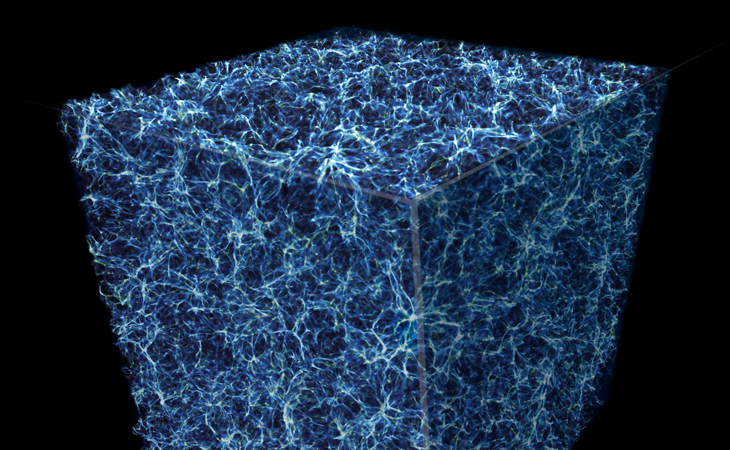 A supercomputer's simulation of the universe. The center bright object is a galaxy cluster about 1 million-billion times the sun's mass. Between the filaments, which store most of the universe's mass, are giant, spherical voids nearly empty of matter.

University of Colorado at Boulder

(ISNS) -- Giant cosmic voids that account for more than half the volume of the universe could make the stars beyond their boundaries appear brighter than they are, cosmologists have unexpectedly found.

Astronomers gazing at the distant universe over the years discovered that the cosmos has a bubbly structure, with filaments and sheets of galaxies intertwining to form a twisting web interrupted by giant voids. These voids possess a very small number of galaxies within them, making them comparably empty to the massive structures surrounding them.

"On very large scales, you can view the universe as a dynamic web of galaxies and galaxy clusters that are in a continuous process of growth and evolution. They are fed from any matter which is near them, which leads to huge voids between clusters that are relatively empty of galaxies or any other matter," said cosmologist Chris Clarkson at the University of Cape Town in South Africa.

The gravity of galaxies warps the fabric of space and time enough to significantly bend the pathway of light traveling past them. This phenomenon, known as gravitational lensing, is a bit like how normal lenses focus light rays traveling through them.

Galaxies can amplify light through gravitational lensing, making images behind them appear brighter than they would otherwise. The minute levels of gas and dust pervading throughout the cosmos generate a low level of gravitational-lens-induced brightening as well. In comparison, since cosmic voids do not contain as much of this gas and dust, researchers expected they made stars behind them appear not as bright -- or at least dimmer than one might expect.

But recently an international team of scientists has surprisingly discovered that cosmic voids may cause brightening as well.

An understanding of how this "antilensing" works begins with knowing that the universe is expanding. Galaxies attract each other through gravity, slowing this expansion, but since cosmic voids are relatively empty, they have a higher expansion rate on average than the rest of the universe.

The greater rate of expansion these voids experience means that, relative to the overall expansion of the universe, stars and galaxies on the near sides of the voids are moving toward Earth while those on the far sides are moving away. Much as how an ambulance siren sounds higher-pitched to people as the vehicle drives toward them and lower-pitched as it moves away, starlight coming from the near side of a void gets shifted slightly to the blue end of the spectrum, while light emitted from the far side is slightly reddened, or redshifted, in a phenomenon known as the Doppler effect.

Since the universe is expanding, the farther away an object is, the more it will get redshifted.

"Thus, roughly speaking, we use the redness of an object to determine its distance," Clarkson said.

In addition, the farther away something is, the less light from it will reach Earth -- as such, the more redshifted an object is, the brighter that astronomers generally assume it actually is than objects that are less redshifted and of the same apparent brightness.

The antilensing effect of cosmic voids adds redness to objects on the far side of a void that are already redshifted due to cosmic expansion. As such, "we get its distance wrong -- we think it's farther away than it actually is," Clarkson said. Consequently, researchers may find it is brighter than it should be given its redshift. For instance, when it comes to a void about 325 million light years wide and roughly 1.3 billion light years away, galaxies on its far side will appear about 1 percent brighter and 3 million light years closer than would be expected if the researchers assumed the void wasn't there.

Accounting for antilensing from cosmic voids may lead to crucial corrections for upcoming astronomical surveys aimed at detecting small gravitational lensing effects related to galaxy clusters, and could also help clarify our understanding of the mysterious invisible dark matter thought to make up five-sixths of everything in our universe.

"These surveys are getting extremely precise, so it's important to account for fairly subtle effects such as these, otherwise we'll reach wrong conclusions," said cosmologist Alan Heavens at Imperial College London, who did not take part in this research.

Clarkson and his colleagues detailed their findings in a paper that appeared online Jan. 10 in the journal Physical Review Letters.