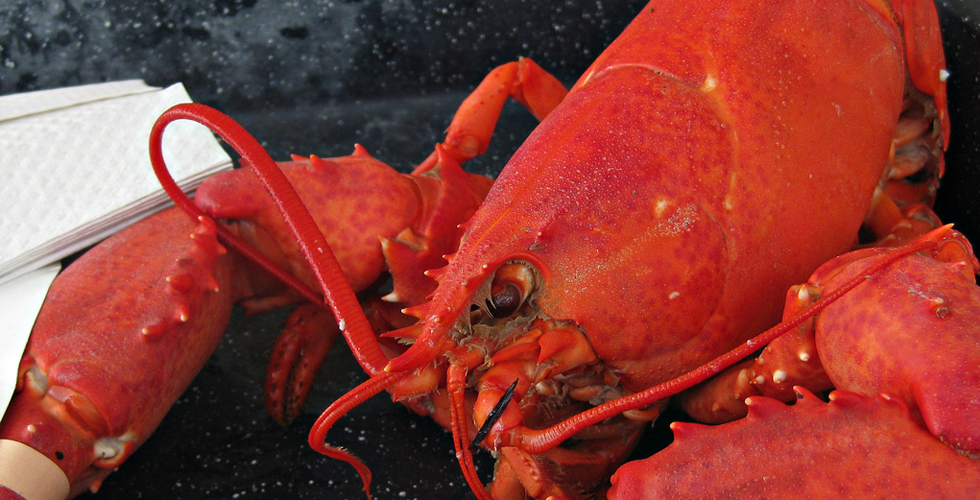 (ISNS) -- Autumn is the prime season for catching lobsters in the cold waters off New England, and the red shellfish will soon find its way into many winter feasts, from office holiday parties to Christmas dinners and New Year's Eve celebrations.

The New England lobster's growing popularity has been accompanied by a drive to develop new methods to get the meat into hungry mouths worldwide, significantly extending its range from a once purely regional dish.

"Lobster has always been a celebration food," said John Hathaway, CEO of Shucks Maine Lobster, based in Richmond, Maine. "Outside New England it's eaten in restaurants particularly for holidays. It's huge in the European Union for Christmas. And Asia is becoming a potentially a huge market for Maine lobsters."

A machine developed by Hathaway increases the promise of selling the shellfish to markets by overcoming the array of problems associated with traditional long-distance delivery methods for New England lobsters. Transporting live lobsters involves a risk that several will die en route. The weight of their shells adds extra freight, and the infrastructure to keep them alive in restaurants before diners order them adds to their overall expense -- which is passed on to customers.

Cooking lobster meat before transporting it creates a different issue.

"The danger is overcooking a casserole or, say, lobster Newburg if the lobster's already been cooked," said Marianne LaCroix, director of marketing for the Maine Lobster Promotion Council.

Hathaway said that pre-cooked lobster "might be good enough for lobster rolls, but if you cook it again, the meat becomes very tough."

The Shucks machine uses pressurized water to remove the meat from the shellfish without cooking it. In addition to enabling the safe and relatively inexpensive transport of raw lobster meat to distant destinations around the world, the system gives chefs an easy way to prepare "lazy man's" lobster.

Unlike the whole boiled lobster beloved by New Englanders, lazy man's lobster dispenses with the shells, the bibs, and the nutcrackers and picks necessary to extract the meat from the shells. That process, known as shucking, can create a messy and embarrassing experience for customers unfamiliar with the minutiae of meat removal.

A ready supply of raw meat removed from the shell precludes the need for kitchen assistants to shuck lobsters for those meals.

The raw material for Hathaway's machine, which he calls the "Big Mother Shucker," consists of lobsters gathered from traps in the cold Atlantic Ocean off the Maine coast.

Workers load about 200 pounds of live lobsters at a time into the machine. At the turn of a switch, fresh water under pressure of 40,000 pounds per square inch floods the device.

"Within 6 seconds the water pressure will kill the animals," Hathaway said.

The high-pressure water breaks chemical bonds within the lobsters' biological cells. That causes the lobsters to die quickly but has no effect on the taste or quality of their meat. The same process also detaches the lobsters' meat from their shells' interiors. By the end of the 6-minute pressure cycle, separation is complete.

Because each part of each lobster experiences the same water pressure, the process does not deform the raw meat. When the workers crack the shell by hand, the parts of a naked lobster emerge.

The human shuckers snap off the tails to remove the tender tail meat, crack the shells with a hammer to take out the claw meat, and remove the thin legs for shucking by a machine.

Once removed, the meat is cooled on ice, packaged, and vacuum sealed. Another treatment with the water, this time at a pressure of 87,000 pounds per square inch, serves to remove any pathogens and bacteria introduced during processing. The company then ships the packages to wholesalers and distributors in North America and beyond.

"We ship the meat frozen or fresh," Hathaway said. "The fresh product has a 30-day shelf life and we offer a shelf life of 18 months to two years for the frozen product."

A more traditional method of preparing lobster meat for transportation -- blanching -- remains popular. "You boil or steam the lobster to cook it for about 2 minutes rather than 12 or 13," LaCroix explained. "This kills the lobster and allows you to extract the meat [without cooking it completely]."

Hard-shell lobsters are often shipped live, in cardboard or plastic boxes kept damp with, for example, wet newspaper. Sometimes during particularly long journeys, LaCroix said, "There are stopping points halfway where the lobsters can be put into water to recover." But not surprisingly, she added, "Mortality is higher on the way to Asia than to New York."

Hathaway learned about the pressurized water technology in 2005, when he ran a traditional lobster shack in Kennebunkport, Maine.

"I knew that it meant an opportunity to get into the Maine lobster business," Hathaway recalled. "I bought the machine, found a place to put it, but had no idea what to do with it."

That indecision didn't last long. Winning a prize for his raw lobster meat at the European Food Exposition in Brussels, Belgium in 2007 convinced Hathaway of the value of his technology.

"And each year since then,” Hathaway said, "we have grown considerably."