A biologist becomes a real-life Mother Goose to study the high-altitude flight of the bar-headed goose.
Image 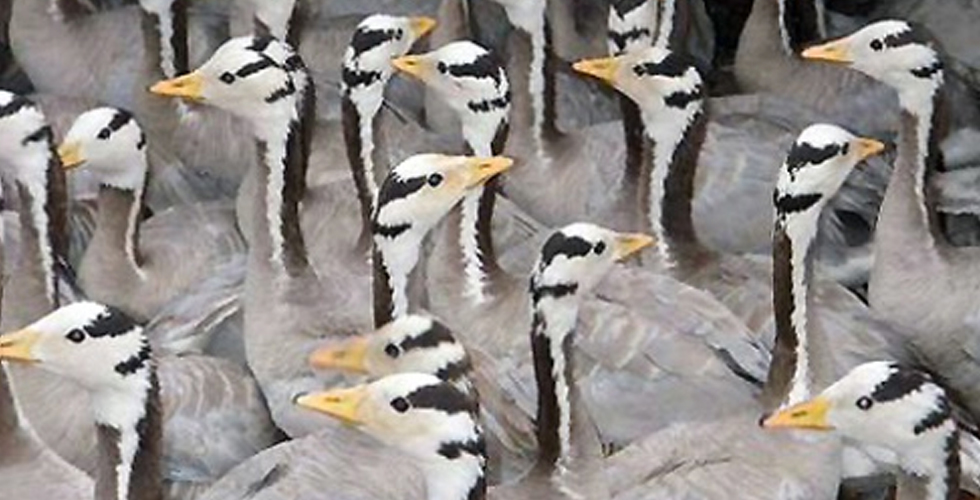 Bar-headed goose, Anser indicus, have white feathers with two black bars striped across both sides of the occiput (head).

(ISNS) -- Jessica Meir turns around and looks at the gaggle of geese behind her and asks "Are you guys ready?"

The geese follow Meir, their "mother", out the door and onto the campus of the University of British Columbia for their daily walk. A postdoctoral researcher in zoology, Meir has acted as a real-life Mother Goose to this group of bar-headed geese for the past year, raising and training them since they were little fuzzy chicks.

Meir's goal was not to turn into the old woman who lived in a shoe or to explore waterfowl husbandry. Instead, knowing that bar-headed geese migrate twice a year across the Himalaya Mountains, Meir had one pressing question: How do they do it?

"Not only are the birds able to deal with low levels of oxygen, they can support flight at those levels," Meir said.

The birds can cover more than 1,000 miles in a single day on their journey between summer breeding grounds on the steppes of Mongolia to their winter homes in India. Even more astounding to physiologists is that the geese perform these amazing high-altitude feats in air with only one-third the amount of oxygen found at sea level.

"Humans can barely make it to the summit of Mount Everest without supplemental oxygen," said William Milsom, Meir's advisor at UBC in Vancouver. "They're barely taking one step at a time. And here you've got birds that are in active flight, which is one of the most energetically expensive forms of exercise there is."

Flight requires 10-20 times the amount of energy -- and thus about 10-20 times the rate of oxygen usage -- as remaining still on the ground. Humans can barely walk in such oxygen depleted air, yet these birds can outperform even the most elite athletes.

Several adaptations enable the bar-headed goose to fly at such high altitudes: They have larger lungs and breathe more efficiently than other geese, their hemoglobin molecules bind extra tightly to oxygen, transporting it in the blood much more efficiently than in animals living at sea level, and their wing and heart muscles have an unusually dense network of capillaries that feed these oxygen-hungry cells.

These adaptations certainly give the bar-headed goose a metaphorical boost in their ability to soar over the highest mountain range on Earth, but they still don't answer some very basic questions about how an animal can thrive at such low levels of oxygen.

The ultimate answers, Milsom said, would come by monitoring the geese during their Himalayan transit. But monitoring things like how much oxygen the geese use, the rate at which they're burning calories, and how their muscles work requires too much equipment for a 5-pound bird to haul at altitudes of more than 30,000 feet.

Enter Meir and her hand-raised geese.

From the moment they hatched at the Sylvan Heights Waterfowl Park in Scotland Neck, N.C., Meir has nurtured and trained her geese for the wind tunnel experiments they will soon undertake. First, Meir trained the geese to fly alone in a wind tunnel that recreated the blustery Himalayan environment. She then began familiarizing the geese with flying while wearing the equipment used to record data about metabolism and oxygen usage during flight.

With the same moldable plastic used to make athletic mouth guards, Meir made oxygen masks that fit over the bird's beak, allowing her to determine how much oxygen the geese use during flight and control how much oxygen they can breathe in. This way, Meir can use her sea level wind tunnel to simulate the hypoxic conditions of the birds' migration. Meir has also equipped the geese with tiny backpacks to record data on heart rate, metabolism, and muscle movements during flight.

The wind tunnel doesn't perfectly mimic the bird's normal migratory environment, but the ability to control conditions and gather more accurate experimental data more than outweighs the negatives -- much like how treadmills are used in laboratory experiments to measure human running.

"If we can get the birds flying for 20 minutes with all of their gear on, that would be perfect," Meir said.

Besides answering basic questions about bar-headed goose physiology, Meir's and Milsom's work will also help scientists better understand topics that could eventually lead to improved medical care for humans. Since most of the damage caused by a heart attack or stroke occurs when organs are deprived of oxygen-rich blood, learning how these birds survive in oxygen levels low enough to potentially kill a human might one day help more victims survive a stroke or heart attack with less permanent damage.

In the meantime, Meir continues to take her geese on their daily training sessions around the Vancouver campus and intends to put her birds to the test over the next few weeks.