Tide-borne pebbles on the seabed can drown out other ocean noises.
Image 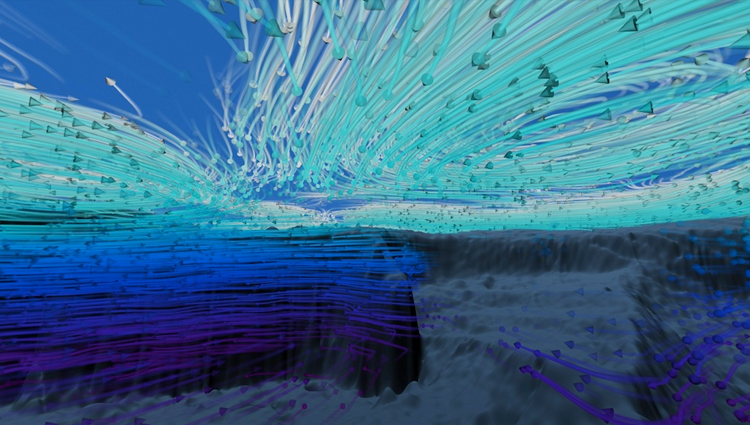 A still capture from "Dynamic Earth: Exploring Earth's Climate Engine," showing an underwater view of ocean currents at different depths off the continental shelf of North America. The full video can be seen here: youtu.be/ujBi9Ba8hqs

(ISNS) -- The oceans are very noisy places: Shrimp crackle, fish bark, dolphins click, humpbacks sing, and many species talk to each other. Humans steer loud ships through the waters.

According to research by a graduate student at the University of Washington, even the gravelly seabed contributes to the cacophony, particularly when the tide is strong. Indeed, the noise of the gravel can be so loud it often drowns out the other noises, making it impossible for scientists to hear the other sounds of the sea if the animal is not close to the microphone.

Since there is increasing interest in harnessing the currents and tides for energy, scientists need to know as much about the environment as they can, and the noise was getting in their way.

"The reason for my project is that scientists are starting to look at these environments to exploit the power of these currents for renewable energy generation," said Christopher Bassett, a doctoral student in mechanical engineering. "Studying the sound is one way of addressing the potential for tidal energy development."

Studying the sound also may make it possible to learn more about the material on the seabed.

Bassett's research is published in the Journal of Geophysical Research: Oceans.

In some parts of the world, such as in Canada's Maritime Provinces, the tides are so strong they would make superb renewable sources of energy if that energy could be captured.

Bassett and two colleagues lowered acoustic monitoring equipment into the Admiralty Inlet, which connects Puget Sound with the Strait of Juan de Fuca, the gateway to the Port of Seattle to the south. All the tidal flow runs through it, sometimes as fast as 8 mph. The site is less than half a mile from the shipping lane.

The seabed, almost 200 feet down, is relatively flat, made up of pebbles and cobbles, a quarter of an inch to as large as four inches across. There is very little sand, Bassett said, because the strong current flushes it away.

It is the clacking of the pebbles against each other when the current moves them that produces the noise. The whole seabed isn't making noise, just sections here and there.

Bassett says his study is the first to show that currents are capable of regularly moving round objects that large.

The noise doesn't sound like pebbles crashing together. Rather, it is more like a rushing clamor, although occasionally it sounds like the noise made when someone dumps a stream of gravel on a pile of similar stones, Bassett said.

Bassett and his colleagues found the sound made by the shifting stones was at the same frequencies as the sounds made by orcas communicating with each other, in the range of 2 to 40 kilohertz, extending well into the ultrasound, above the range that humans can hear. The stones limit scientists' ability to detect most of the orcas' sounds, and the orcas can't hear each other if they are near the stones.

"By almost every objective standard, it is a noisy place," Bassett said.

Many stones are covered with biological matter, such as algae and sponges. It is likely the stones that are not covered are the ones that move around the most because the collisions would knock off the covering.

The study is valuable especially if engineers go ahead and try to harness the tides for power, said Lindy Weilgart, a marine biologist at Dalhousie University in Halifax, Nova Scotia. One of the prime sites for such projects would be the Bay of Fundy, between the Canadian provinces of Nova Scotia and New Brunswick, which has the highest tides in the world.

Turbines used to generate the power are "like blenders," she said, and would pose a lethal threat to marine mammals in the area. The turbines make enough noise to scare the mammals away, but if the seabed is drowning out the turbine noise, the animals might be vulnerable.

"I didn't realize the extent of the problem," said Weilgart, whose specialty is the vocal behavior of whales. Having the seabed as a source of loud noise would make her research more difficult.

"You have to worry about taking noise into consideration because it is predictable enough; you ought to be able to model that. It's a manageable problem," said Weilgart. "But if it swamps all the other noise you are not getting a reliable picture."