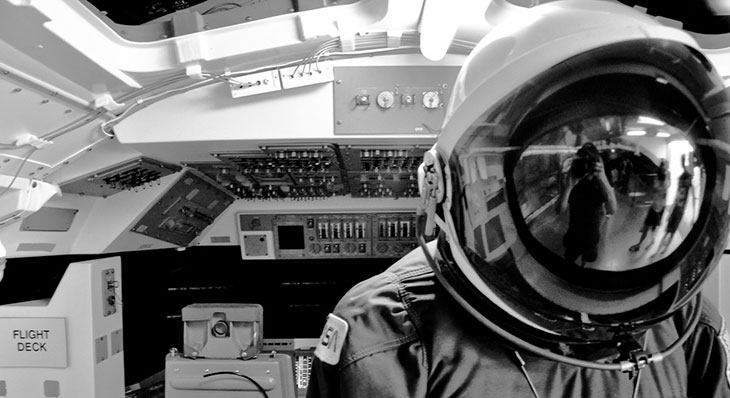 (Inside Science) -- Novel technologies, innovative engineering and breathtaking discoveries could be the story of the next 100 years of space exploration. But space travel involves more than math, telescopes and rovers according to the speakers at a session at last month's annual meeting of the American Association for the Advancement of Science in San Jose, California. Modern space exploration mixes together governments and private companies, science and ethics, promise and possibilities.

Chris Impey, an astronomer at the University of Arizona in Tucson, thinks that the desire to explore, which has pushed humans to cross oceans and conquer mountains, will continue to propel humans into space.

"I think what is happening now is as profound as the transition that took place among hunter gatherers when they left Africa 50 or 60 thousand years ago," said Impey. "It took an amazing short time – just a couple hundred generations – for simple tribal units of 50 or 100 to spread essentially across the Earth."

And space exploration is about to pick up, according to Impey. The original 1960s space race that spawned the Apollo missions rose out of geopolitical strife during the Cold War. Now, the federal funds for space travel are drying up. In the mid-1960s the NASA budget topped out at almost 4.5 percent of the U.S. Government's budget, a number that has now shrunk to roughly 0.5 percent.

"NASA has very little slack in its budget for new, clever initiatives," said Impey. "We are now witnessing a transition to a more private enterprise driven space program."

He thinks the rise of space travel will mirror the development of the Internet. Impey explained, that people have forgotten many of the first Internet pioneers—those who came even before the military began investing in the Internet. Since then, the Internet has expanded with the commercial sector driving much of the innovation.

Over the next 100 years, we could decide to tackle anything from building a space elevator on the moon to sending nanobot probes to another star system or even constructing a space colony, said Impey.

"We don't know who the Googles and the Amazons are going to be. It might be SpaceX and Virgin Galactic," Impey said about the private groups who will be involved in the next stage in space travel. "I do believe that what happens next [with space travel] will dwarf what's happened before."

But progress will not come without cost. Impey reminded the audience that these continued forays into space will likely include accidents like those that occurred in October 2014: the Orbital rocket explosion and the Virgin Galactic SpaceShipTwo crash, which killed one pilot and injured another.

"People died in the first decade of the civil aviation program," said Impey. "There are going to be ups and downs."

Tourism also will play a role in moving space exploration forward. For example, Guy Laliberté, the founder of Cirque du Soleil, paid $20 million for a 9-day visit to the International Space Station and an additional $15 million for a spacewalk. Now, singer Sarah Brightman has announced she will soon travel to space; she will sing a new song by ex-husband Sir Andrew Lloyd Webber on the International Space Station. Enviable vacations, but not your average travel agent bill.

Currently it costs $3,000-4,000 per kilogram to send a payload to space, but Impey says that cost can easily come down to a few hundred dollars per kilogram by applying clever engineering to modern technology, opening the door for increased tourism.

And there's money lurking beyond those moons. Asteroids and comets could be mined or foreign bacteria or viruses – if found – could be used in pharmaceutical development. The competition could become fierce for rights to own space.

"We have a fraught history of figuring out who owns what,” said Sara Waller, a philosopher at Montana State University in Bozeman. Ownership questions that plague us on Earth will rear up as we move off planet, she warns.

The premise of ownership has resulted in conflict and compromise throughout human history, pointed out Waller. In the U.S., settlers' claims for space overlapped with those of Native Americans. Aggression and genocide erupted as so many people vied for the rich resources.

On the other hand, countries have parceled off Antarctica without heady conflicts.

"This has nice analogies for what we are doing in space," said Waller. "It's a great big place. Not a whole lot of people yet needing to go out there. So far so good."

Humans will have new questions to ponder as we return to the moon, dig beneath Mars' surface, and peek around the far side of Pluto. And many of these questions have roots on Earth. The U.S. and other countries have and will continue to debate how to treat wild and historic places, weighting protection and development.

Outside our atmosphere, we will tackle these questions again when we ponder whether to treat the Apollo landing sites as historic landmarks and not disturb the footprints. If we find Martian microbes, does Mars belong to them or to us? Can or should we develop it? And what happens if we come across something bigger among the stars?

"What if they were tiger-like, frog-like, or human-like?" asked Waller. "Do human needs come first?"

Leigh Cooper is a science writer based in Santa Cruz, California. She tweets at @gdaycoop.