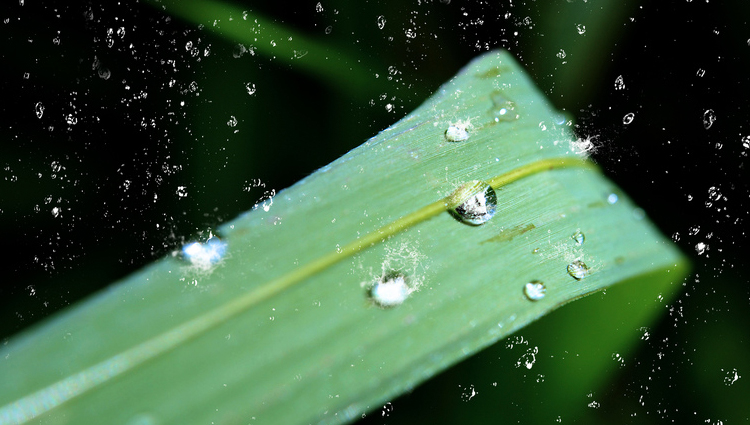 (Inside Science) -- When a drop of liquid hits a solid surface, the liquid will do one of two things: flatten like a pancake or launch a halo of droplets into the air. It's a surprisingly complex and difficult-to-predict event.

The secret is in the air. By taking into account the gas surrounding the drop, researchers find that they can calculate just how fast a drop can travel without splattering when it hits. A new study suggests that after the drop strikes a solid surface,  a tiny cushion of air carries along its edge as it spreads. The air provides lift like on an airplane wing and flings away droplets from the drop's edge.

"People have been working on this problem since the end of the 19th century," said José Manuel Gordillo, a mechanical engineer who studies fluid dynamics at University of Seville in Spain and coauthor of the study. "There was a big controversy about the physics behind the condition that determines the splash."

English physicist Arthur Mason Worthington pioneered the use of high-speed photography to capture images of mercury drops as they spread, splashed and beaded up on glass in the 1890s. But neither he, nor the physicists who built on his work during the following century, considered the effects of the atmosphere. These experiments suggest that splashing depends on the size and speed of the drop, how easily the liquid flows, and its density.

In 2005, Sidney Nagel and his colleagues at the University of Chicago renewed interest in this classic problem when they made high-speed video recordings of falling drops in different atmospheres. They found that drops don't splash in a vacuum. Researchers then began trying to explain how the surrounding gas contributes to the splash.

Gordillo and his colleague at the University of Seville, Guillaume Riboux, put all the pieces together into a single mathematical model, in a paper that appeared online on July 11 in Physical Review Letters.

"Until now, people were looking at one aspect of the problem, but not really to the entire problem itself," said Christophe Josserand, a physicist affiliated with the Institut d'Alembert, the French National Centre for Scientific Research and the Pierre and Marie Curie University in Paris, France, who was not involved in the research. "[The researchers] try to really describe the mechanism that leads the splashing and how the air can be important," he said.

They  recorded video of drops of eight different liquids hitting a dry glass microscope slide at different speeds. They then compared the physical measurements from the recordings to calculations predicting the drop's behavior to see if they agreed.

The  videos showed that when a drop first hits a hard surface, a very thin layer of liquid begins spreading outwards, driven by the momentum of the drop. But the surface tension of the liquid pulls back on the layer, as it tries to keep the drop together. If the layer is thick enough and moving slowly, then the drop will simply spread out along the surface.

But if the leading edge of the layer is thin and moving quickly, it flows over a small layer of air beneath it. This air provides lift to the leading edge of the liquid layer in the same way that air buoys an airplane wing. The lift makes the liquid layer unstable, and if it is great enough, creates waves, which overcome the surface tension and shoot out the droplets of water in a ring around the drop.

"In the end, it's as simple as aerodynamic takeoff -- a plane taking off the ground," said Gordillo.

At these miniscule scales, another factor comes into play, which previous researchers had not fully explored: the mean free path of the air. The mean free path is the average distance that a molecule travels inside the gas before hitting another molecule. Since molecules of gas do not all move in the same direction as the gas flow -- but instead bounce off each other -- the mean free path affects the speed of the air, which influences how much lift it provides to the edge of the liquid layer.

By accounting for the mean free path of the gas, the researchers could make accurate predictions, which agreed with their measurements of the falling drops, and the measurements of other researchers. Using the model, the researchers can calculate the top speed that a drop can travel without breaking apart on landing. These calculations may have applications for faster, sharper inkjet printing. Inkjets shoot droplets of ink onto a page, but if the drops hit too fast, there can be splatter, which muddies the printing. But no one wants to wait for a slow printer. These findings could lead to faster, cleaner printouts.

On the opposite side of the problem are combustion engines. To get efficient combustion, engines need tiny droplets with more splashing so that the fuel will mix effectively with oxygen.

Forensic science may also benefit from the model. By looking at the shape of a blood drop, crime scene investigators can estimate how fast the blood travelled when it hit and then calculate the height from which it fell, said Gordillo.

In future work, the researchers will study splattering on surfaces that are rough or absorbent, instead of smooth glass.