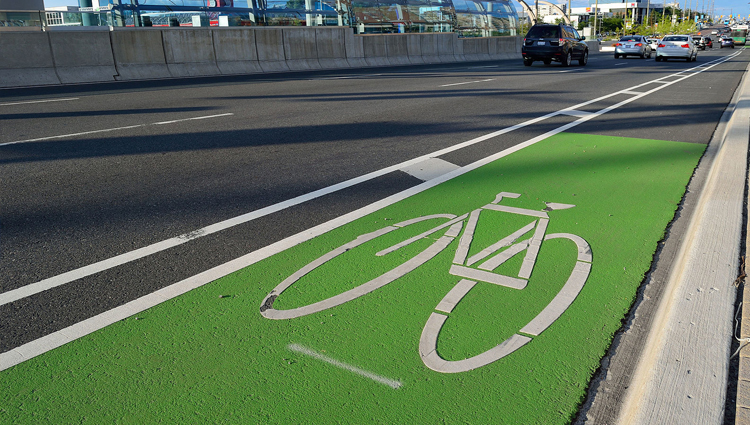 WASHINGTON (ISNS) -- The streets of Washington may soon become a little more bike-friendly, thanks to a plan to build 80 miles of new bike lanes presented at a public meeting on Thursday. The proposal includes not only traditional white-striped lanes down the sides of streets, but also an experiment that would convert the middle of lane of Pennsylvania Avenue to a two-way bike route lined with orange posts.

"We hope to put these down in the next couple of months," said Jim Sebastian of the District Department of Transportation.

For Congressman Earl Blumenauer, these new lanes mean an easier and faster daily commute. Every morning, the dedicated cyclist straps on a bow tie and a helmet and pedals his aluminum bike to work, through rain, through snow, on crowded streets designed for cars, not two-wheelers.

"The goal is to in fact and in perception make bicycling safer and more comfortable," said Blumenauer. He originally developed the Pennsylvania Avenue lane idea and heads up the Congressional Bike Caucus -- a bipartisan group of more than 160 members of Congress that promotes bicycle commuting.

Years of studies have shown that even the humblest bike lane can make a road safer for biking. But researchers also suggest that getting new bicyclists on the road will require more than white stripes on pavement.

Gearing Up For City Bikes

Across the nation, urban bicycle use is on the rise. About one out of every two hundred Americans regularly bikes. In cities such as Portland, Minneapolis and Sacramento, the number of cyclists has double or tripled over the last decade.

These cities have invested millions of dollars in making their streets more hospitable for bike commuters. New York City installed 200 miles of bike lane over three years; Chicago is slated to lay down 500 miles of stripes by 2015; and Washington's new push would triple its 40 miles of existing bike lanes.

A recent review of dozens of studies revealed that, on average, every extra mile of urban bike lane (about $20,000) is associated with about a one percent increase in bicycle traffic.

But deciding where to place each bicycle lane to increase the number of bicyclists is not an exact science. A 2003 study in San Francisco, for example, found that some of its new bike lanes created additional bike traffic, while others simply attracted existing riders from the surrounding streets.

What is better know is that bicycle lanes change the behavior of both drivers and bicyclists. While studies do not agree about whether bike lanes increase the average distance between cars and bike, they do show that drivers are less likely to make extremely close passes. And a recent Australian study showed that filling a bike lane with brightly-colored paint has been shown to cut the chance of a car encroaching on the lane.

These behavioral changes have a measurable safety impact. A survey of almost 2000 bikers in 1996 found the risk of crashing on a road with a bike lane to be less than half of that on roads without lanes. Car drivers may also be protected by the bike lanes -- they are less likely to veer sharply into other car lanes to avoid bicyclists on streets with a bike lane.

But bike lanes on busy streets may not be enough to address a issue central to increasing bicycle commuting -- the bike gender gap.

"We know that there's a big difference, and it's partially a safety comfort thing," said Susan Handy, a transportation researcher the University of California, Irvine and an avid bicyclist. "Better, safer bicycling facilities should help to attract more women to bicycling."

In surveys conducted she conducted, female riders listed safety and comfort as top concerns and indicated a strong preference to ride on low-traffic streets and off-street paths. Women also indicated a greater need for car than men; Handy suspects that may be because they tend to bear a greater brunt of the household responsibilities than men.

Jennifer Dill, a professor at Portland State University, confirmed female riders' preference for safer bicycling facilities by attaching GPS devices to the bicycles of more than 149 Portland riders and tracking their movements for a week. Men were more likely to take the shortest path to their destinations, even if it passed through heavily-traffic arteries, while women often added on extra miles to use quieter side streets.

The most progressive ideas for making biking on busy streets more appealing to riders of both genders are coming from Europe, said John Pucher, a transportation researcher at Rutgers University in New Jersey.

Over the last thirty years, cities such as Amsterdam and Copenhagen have invested heavily in bicycling infrastructure designed to improve safety -- from bike lanes separated from traffic by a curb to traffic lights with three settings: red, green and bicycle.

As a result, said Pucher, bicycle use is much higher in these cities. In 2008 cyclists accounted for 38 percent of all vehicle traffic in Amsterdam in 2008. And female bicyclists in Copenhagen outnumber their male counterparts.

"In Munster, Germany, everyone bikes: men, women, old, young, priests and nuns," said Pucher. "The reason that Americans bike so much less is not a difference in culture or the chromosomes in their bodies. It's just the dangerous conditions they're faced with."

Whether the orange posts destined to line the center lane of Washington's Pennsylvania Avenue will provide enough safety to attract new riders remains to be seen.