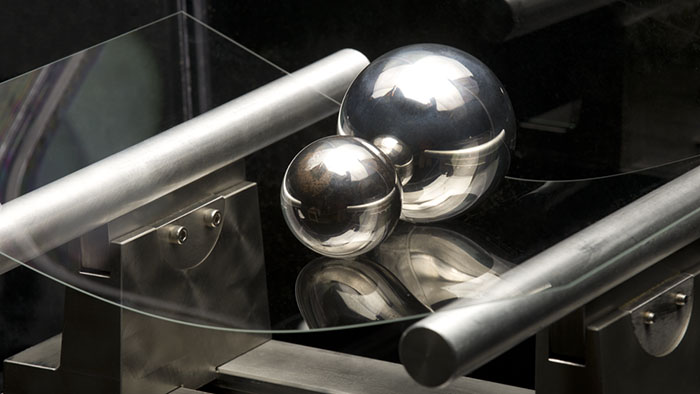 (Inside Science) -- Alterations to the usual glass production process, such as putting the material under stress, can introduce effects that linger even after the material hardens. While manufacturers have long exploited this phenomenon to strengthen glass, a new theory aims to get closer to understanding why it happens.

Glass is not as well understood as most materials, because it straddles the line between liquid and solid. In typical crystalline materials, molecules assemble into a set structure over the span of the entire material as the substance solidifies from a disordered liquid form. Glass, on the other hand, retains a liquid-like disorder even after it hardens.

Without a set architecture, these disordered molecules are particularly vulnerable to outside forces. If you push or pull on a substance, you create internal forces, or stress, in the material itself. Once you remove that force, you'd expect the molecules to return to equilibrium, removing the stresses. But glassy materials "remember" the long-gone force.

Physicists are trying to understand how glass molecules permanently retain this residual stress. "The material properties depend on how the material is produced," said Thomas Voigtmann, a physicist at the University of Konstanz and the Institute of Materials Physics in Space, in Koln, Germany. "And that's a rather fascinating topic to understand."

In a paper accepted for publication in Physical Review Letters, Voigtmann and his coauthors describe glass's residual stress in physics terms, by observing how the motion of individual atoms affects the entire complex system. But engineers are already taking advantage of glass's history dependence—no theoretical physics required.

Stress helps glass resist damage. By incorporating it into the manufacturing process, Engineers at Corning, Inc., in N.Y., can give a normally fragile material super-strength. Their Gorilla Glass product now forms the screens of more than 1,000 different devices, from smartphones to tablets to televisions.

To avoid building flaws into the material, Corning creates large, flat panes of Gorilla Glass mechanically. During the process, the molten glass is suspended by its top edge, leaving it untouched by human hands—or anything else. Despite their stability, these sheets cannot prevent future damage...yet. The next step is to apply stress to the glass, compressing its molecules to strengthen the material and enable it to resist flaws.

Cut to appropriate sizes, the unfinished Gorilla Glass then takes a bath in a molten solution of potassium salts. This process leaches small sodium ions out of the glass and replaces them with larger potassium ions. The large particles squeeze the sheet from the outside in, compressing the material. This creates two outer layers squeezing inwards, towards a central layer that balances out the internal forces by pushing back.

Compressing the surface of the glass makes it stronger, able to resist blows and scratches rather than breaking immediately.

"Even if you damage the glass, the flaw is contained within that compressive stress layer," Haynes elaborated. "It doesn't allow the flaw to expand." In order to break a Gorilla Glass screen, a flaw would have to penetrate through the compressive layer and into the tension layer.

Although the ingredients that go into Gorilla Glass also help the material withstand damage, stress is the real key to its abilities. It works even though its creators didn't understand its exact molecular behavior. But scientists still want to know more.

"We're trying to give some guidance on why this works and how it can be improved — that's the long term goal," said Voigtmann. "What we're trying to do is give a theoretical physics explanation for empirical laws."

To formulate this explanation, the scientists used both theoretical physics and experimentation. Molecular interactions are particularly difficult to observe because they occur on such a small scale. Instead of zooming in to the molecular level, the researchers took advantage of a glass substitute: colloids. A colloid is a type of substance with particles suspended in a solution. The common colloid paint, for example, consists of solid pigments floating in liquid.

"These colloids act like atoms," explained Voigtmann. "It's a model system that in many respects behaves like window glass, but it's on a blown-up scale: colloids are big enough to watch under a microscope."

The researchers put colloids under stress and then observed their behavior through a microscope. This led them to develop a physical theory that describes why forces in molten glass remain locked in the material.

Although this theory accurately models the behaviors that the researchers observed during experiments, the understanding of glass remains a "hotly debated" topic, said Voigtmann.