Dark sky tourism seeks to preserve the rich storytelling history of the indigenous people before it fades away.
Image 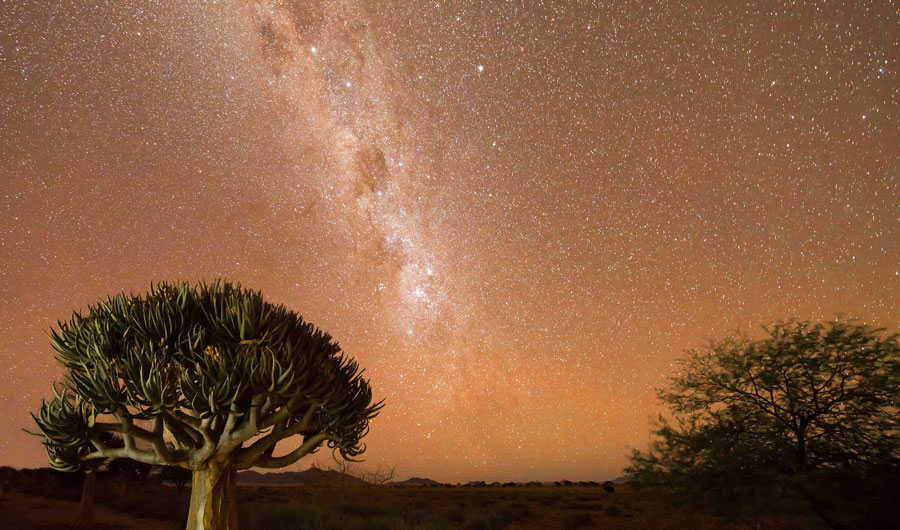 The Milky Way viewed from the Namib desert.

(Inside Science) -- Darkness disappears as soon as we turn on the light. The same goes for the stars twinkling in our night skies.

During last month’s  virtual meeting of the American Astronomical Society, scientists discussed the prospects and importance of preserving our dark skies. One presenter focused on Namibia, where there is a rich and yet-to-be-documented oral history about stars among the indigenous people, as well as opportunities for dark sky tourism to bring economic and educational benefits to local communities.

"I've heard amazing stories from talking to people in rural areas who are still using the stars on a daily basis. For example, when they're out in the evening, and they see, 'Oh, there's that constellation there in the sky. So that means it's around this time, and I really need to go home,'" said Hannah Dalgleish, an astrophysicist working for the University of Oxford in the U.K. and the University of Namibia in Windhoek.

Many of us may be familiar with the constellations and celestial myths of the Greeks, the Chinese, or maybe even the Egyptians and the Hindus -- all civilizations from the Northern Hemisphere. People who live in the Southern Hemisphere may have not only records and stories about the same stars documented by the Global North, but also stories and records about stars that are only visible to them, such as those that make up the Southern Cross -- or, as the Aboriginal peoples of Australia know them, part of the head of the "Emu in the Sky."

"There has been a lot of research on Aboriginal Australian indigenous astronomy, and also in Polynesian countries and in New Zealand," said Dalgleish. But, she said, there hasn't been so much in Africa. "One of the challenges with Africa is the number of tribes -- just in Namibia, there are at least 10 different tribes, and they all speak different languages and have entirely different experiences and stories about the stars," she said.

There are existing telescopes and observatories in Namibia where astrotourism, and dark sky tourism in particular, can be developed. The world's largest known meteorite, a 66-ton hunk of metal named Hoba, is also located in Namibia and can be used to seed future astrotourist attractions.

Dalgleish also cautioned against the usual pitfalls of developing impoverished communities when considering dark sky tourism for an area.

"What I envision is to have something that is totally run and owned by the locals," she said. "There is such a deep cultural and spiritual connection with the stars here in Namibia that goes a lot deeper than what I have experienced in the U.K. It's really important for us to cherish, but also not trample over."

Editor's Note (2/8/2021): This article has been updated to clarify Dalgleish's affiliations.