Puzzling planets with the apparent density of cotton candy probably have rings, according to a new study.
Image 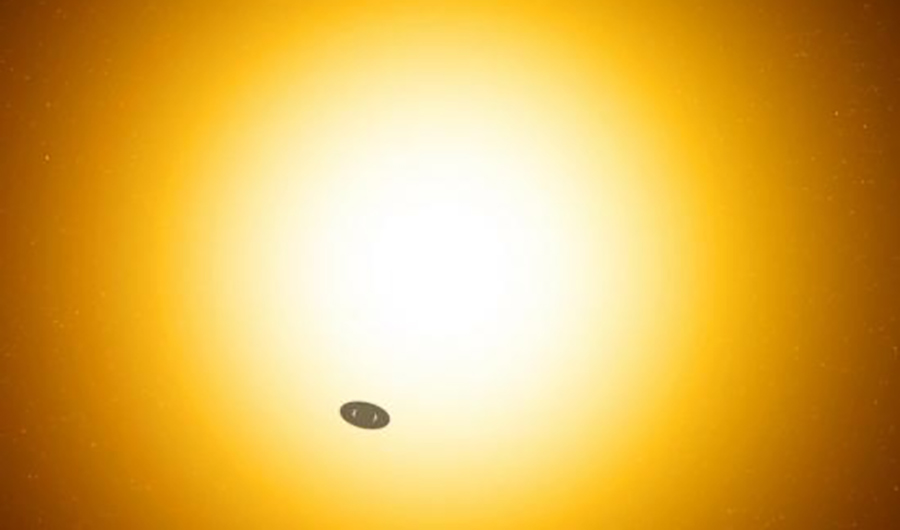 Artist's concept of a ringed planet transiting in front of a host star.

Courtesy of  the Carnegie Institution for Science

(Inside Science) -- Scientists have begun to spot a growing number of planets beyond our solar system. Astronomers call a portion of them "super-puffs" because they are far less dense than Saturn or any other known world. But the conundrum could be solved if the astronomers simply reconsider the planets' shapes and include rings on them, according to a new study.

When astronomers discover a new exoplanet, they can infer its width by estimating how much of the host star's light is blocked as the planet travels in front of it. They can also infer the planet's mass by seeing how much of a tiny tug the planet gives the star with its gravitational pull. They can then roughly figure out how dense the planets are. But the seemingly low density of super-puffs -- or as they're sometimes called, cotton candy planets -- could be explained if they're actually smaller than they seem.

"Our idea is that maybe these things are blocking a lot more of the starlight than you might expect, not because they're big and puffy but actually because they have rings like Saturn," said Anthony Piro, an astronomer at Carnegie Observatories in Pasadena, California. He and Caltech astronomer Shreyas Vissapragada just published their findings in the Astronomical Journal.

Planets with rings aren't uncommon. In fact, all four of giant planets in our solar system, from Jupiter to Neptune, have rings. But for a distant world's rings to fool astronomers into thinking the planet's bigger, the rings have to be thick and packed. Most of the super-puffs found by NASA's Kepler space telescope are close to the stars they're orbiting, and that puts another limit on them: in order to last, their rings have to be rocky, made from materials such as a smashed-up moon, rather than icy like Saturn's.

Some of the super-puff candidates may not have rings, however. Some orbit so close to their stars that the star's gravity would warp and disrupt any rings. Other super-puffs don't seem to be spinning fast enough to maintain stable rings. Piro and his colleagues concluded that until the upcoming James Webb Space Telescope launches, they'll be unable to learn much more about the rings.

"I think it's really exciting that we're learning so much about these alien worlds," said Piro. "The idea that we'll start measuring these properties around completely different stars is just amazing to think about."