By collecting blowflies and analyzing their gut contents, researchers hope to peek at sites that are difficult or dangerous to access.
Image 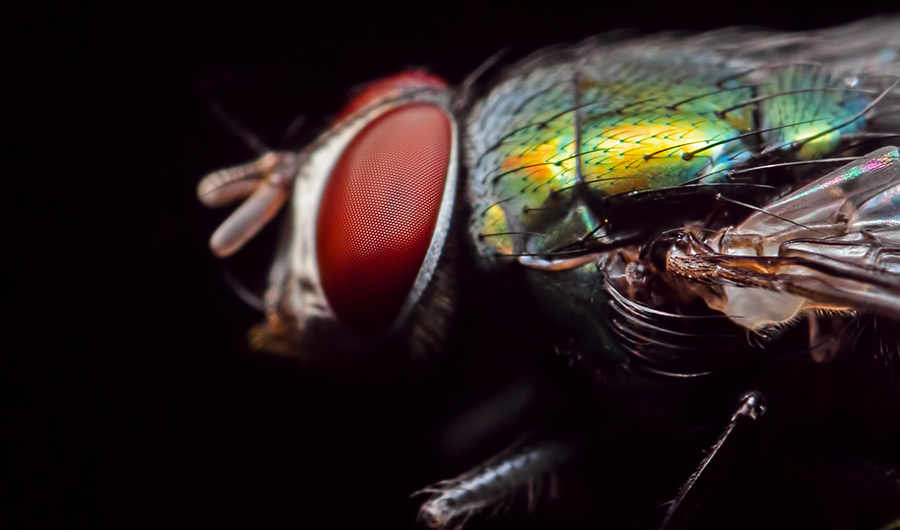 (Inside Science) -- Chemical weapons are banned by international treaty, but they are still occasionally used to kill and seriously injure people around the world. Now, investigators may have found an unlikely ally: insects called blowflies that feed on feces and dead bodies. Where humans may be held back by danger or bureaucratic red tape, blowflies travel easily, collecting samples in their stomachs.

"Blowflies are pretty much present in any environment," said Christine Picard, a molecular biologist at Indiana University Purdue University Indianapolis. "You don't have to send someone in to collect the samples. … You just have to collect the flies."

Blowflies might acquire their "samples" either by feeding on the bodies of humans or animals killed by chemical weapons, or by drinking water contaminated with chemical weapons or their byproducts, she said. The researchers have also developed tests to determine what species a fly has been feeding on and whether it was eating feces or dead bodies. Those tests could provide some hints (though not proof) about where a fly might have picked up the chemicals in its gut.

Collecting the flies is easy; you just lure them in with rotting meat.

"That's what I do now. If I go somewhere, I'm like, 'hmm, can I get some blowflies?'" said Picard, who uses the flies for multiple lines of research. "It's pretty rare that I come home empty handed." Picard speculates that blowflies could even be collected by robots, further sparing humans from having to enter dangerous areas.

Picard's chemical weapon research is in its early stages. So far, she and her colleagues have conducted proof-of-concept experiments by feeding blowflies on substances that are similar to chemical weapons but pose no danger to humans. The substances were still detectable in blowflies' guts two weeks after the feedings, suggesting that wild blowflies could in theory retain chemicals of interest in their bodies long after a suspected chemical attack. Picard presented the findings last month at a virtual meeting of the Entomological Society of America.

The researchers used three different substances that mimic a group of chemical weapons known as nerve agents. Nerve agents include sarin, which has been used against civilians in the ongoing Syrian civil war, and VX, which was used to kill Kim Jong-nam, the half-brother of North Korean leader Kim Jong-un, in 2017.

Two of the three substances used in the study remained in blowflies' guts long after the blowflies consumed them, with the exact duration varying between individual flies and between environmental conditions. For example, high temperatures sped up the flies' metabolisms, causing them to clear the substances more quickly. Fourteen days after a four-hour feeding session, the researchers could detect one of the chemical substitutes in 100% of flies kept at 66 F, versus 17% of flies kept at 95 F.

The third substance they tested, Dichlorvos, is also used as a pesticide, and it killed all the flies exposed to it. This brings up an important point: Real nerve agents would likely kill flies as well, said Nick Manicke, a chemist at Indiana University Purdue University Indianapolis, who conducted the chemical analyses for the study. Moreover, most real nerve agents break down more quickly than the chemicals they tested, so even if real nerve agents didn't kill the flies, they would probably not last as long in their guts.

But that doesn't mean the blowfly approach would be ineffective. When nerve agents break down, they leave behind new chemicals that are nontoxic and can last for years, said Manicke. In real investigations, it would likely be these breakdown products, not the nerve agents themselves, that would be detected in flies. The researchers are planning to conduct feeding experiments with nerve agent breakdown products next.

There are also chemicals left over from the manufacturing process that can be useful to investigators, noted Dan Kaszeta, an author and independent consultant in chemical and biological defense who was not involved in the study. By analyzing the full suite of compounds associated with an attack rather than just the chemical weapon itself, investigators can get valuable clues about where the weapon came from, Kaszeta said. Kaszeta has held positions with the U.S. Army, the U.S. Department of Defense, the White House, and private industry.

Kaszeta agrees that the blowfly approach may have potential, but only in certain situations -- most likely as a general intelligence-gathering tool to offer guidance about where more traditional approaches are needed. He doubts data from blowfly guts would hold up as forensic evidence in an international court, since it's impossible to know exactly where and when a fly encountered a substance.

There's usually no shortage of physical evidence left over from chemical attacks, Kaszeta noted. But scenarios involving chemical weapon use are inherently dangerous, and governments often put up procedural hurdles that make it difficult for investigators to collect what they need. There are legal challenges involved in exhuming and collecting samples from human bodies, for example, and even dead livestock can present hurdles since they invariably belong to someone. Kaszeta imagines that collecting blowflies could be an easy and rapid first step, helping investigators determine where to focus their efforts.

"There's a fundamental difference between going in and digging up a dead body, which has, you know, legal implications amongst other things in about every country in the world, versus dealing with, say, a couple of dead flies," said Kaszeta. "You can hide a few dead blowflies in your socks."