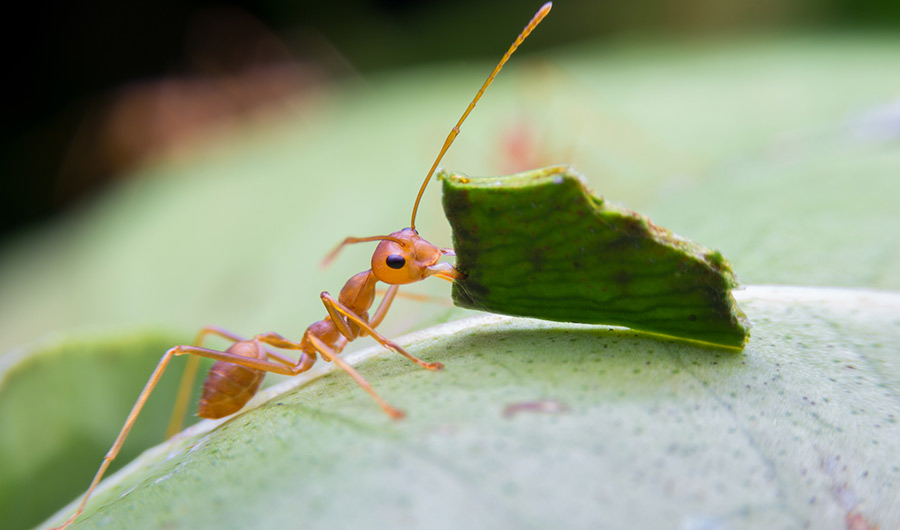 (Inside Science) -- When it comes to battling harmful microbes, leafcutter ants face daunting challenges. They must protect not only themselves, but also the fungus gardens they grow for food in chambers in their nests. The ants live in colonies with millions of close relatives and they don't practice social distancing, so it's easy for diseases to pass from ant to ant. And unlike humans, insects don't have an adaptive immune system that's able to learn to recognize and attack new invaders.

To make matters worse, leafcutter queens don't begin producing fertile offspring until they are several years old, which means there is a long time between generations. In contrast, many microbes can reproduce in a matter of minutes. In theory, that could make it nearly impossible for leafcutter ants to evolve new defensive toxins as fast as their enemies evolve resistance to those toxins.

Enter the ants' allies: friendly bacteria. Some types of leafcutter ants have specialized cavities on the surface of their bodies where they host a type of bacteria called Pseudonocardia. The ants even secrete nutrient-rich substances for the bacteria to eat. In turn, the bacteria produce a range of toxins that help the ants defend their fungal crops from other types of fungi.

The ever-changing mixture of toxins likely creates an extremely difficult challenge for the parasite, said Steve Kett, an evolutionary biologist at Middlesex University London. "It can't keep up."

In a paper published this week in the journal Proceedings of the Royal Society B, Kett and his colleagues describe how they think certain insects use bacteria to sidestep the problem of antibiotic and antifungal resistance. It's the same problem that plagues physicians and drug developers, giving rise to infections that are difficult or impossible to cure -- but insects have apparently been solving it for tens of millions of years.

It's easy to imagine how insects might benefit from bacteria that produce antimicrobial compounds. The new research focused on antifungals, but the same principles should apply to antibiotics that kill harmful strains of bacteria, according to Massimiliano Marvasi, a microbiologist at the University of Florence in Italy and one of the paper's authors. Laboratory studies with antibiotic medicines suggest that when antibiotics are used in combination rather than individually, it's harder for bacteria to evolve resistance. This is especially true when the antibiotics work through different mechanisms, according to Marvasi.

The antifungals produced by leafcutter ants are indeed very different from those produced by their symbiotic bacteria. That means that together, the ants and the bacteria create a diverse antimicrobial mixture that may well stymie enemy microbes.

Moreover, the antimicrobials produced by bacteria are likely always changing, creating a moving target for parasites. In addition to having a shorter length of time between generations, bacteria are able to swap genes with one another, even with bacteria they aren't closely related to. Quicker turnover should lead to frequent mutations that alter bacterias' antimicrobial toxins, while the ability to swap genes should allow such mutations to spread swiftly.

But is this really how things play out in nature? It's too soon to be sure. The new paper presents a hypothesis that still needs to be tested, according to the researchers.

The strongest evidence so far comes from the leafcutter ants, where past studies have shown that symbiotic Pseudonocardia bacteria are important for protecting the ants' fungal food supply. Researchers have even found that when a parasitic fungus invades an ant nest, the parasite increases its production of compounds that attack the Pseudonocardia bacteria, suggesting that the parasite and the bacteria are in the midst of a long-standing evolutionary arms race. 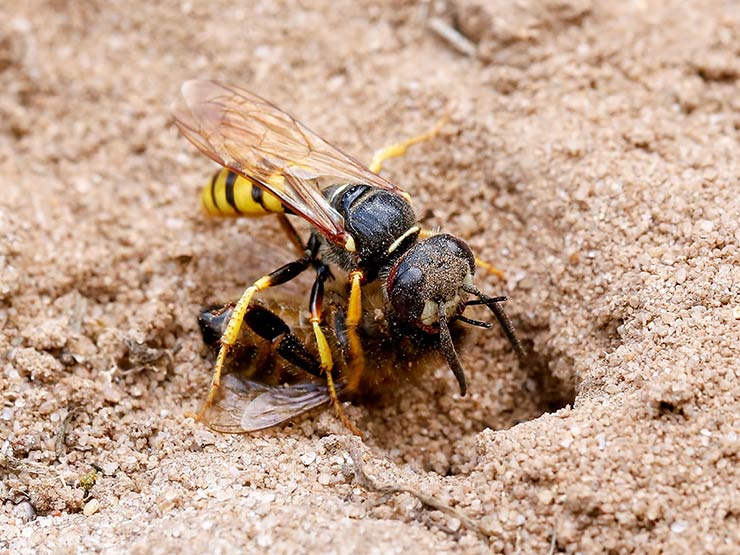 A female beewolf wasp drags a bee into her nest to provision her larvae.

Although insects that are social and long-lived may have greater need for antimicrobial-producing bacteria, such partnerships may benefit other insects as well. For instance, a group of solitary bee-hunting wasps called beewolves host specialized bacteria on their antennae that produce antifungal compounds, said Michael Poulsen, an evolutionary biologist at the University of Copenhagen in Denmark, who worked on many of the studies the new paper built on. Mother wasps smear the bacteria on the ceiling of the cavity where they lay their eggs. When researchers experimentally deprived beewolf larvae of those bacteria, nearly all the larvae died.

Bacteria that produce antimicrobial toxins have also been found in or on the bodies of many other types of insects, including fungus-farming termites and solitary mud-dauber wasps. Poulsen noted that in most cases, it's not clear what purpose these antimicrobial toxins serve. The toxins might be helping the insects by killing things that could make them sick or could compromise their food supply. On the other hand, the toxins might just be helping the bacteria themselves maintain a strong self-defense.

Poulsen said he agreed with the paper's main arguments, although he wished it had developed more detailed models and explored their deeper implications.

"I think they're right that combinations of compounds [are] key to preventing resistance evolution," he wrote in an email.

Ant strategies in the clinic?

If insects really have solved the problem of antimicrobial resistance by combining their own defensive compounds with those of bacteria, the human medical field might want to take note. Scientists first showed how combinations of antibiotics can prevent resistance in the 1950s, but that research was largely ignored until recently, and the use of drug combinations to prevent resistance still hasn't made it into medical care in any systematic way, said Viktoria Lazar, a molecular biologist who studies antibiotic drug resistance at Technion - Israel Institute of Technology, who was not involved in the new paper.

In the last few years there's been a resurgence of work on how to prescribe antibiotics to avoid resistance, noted Lazar. It may not always be ideal to prescribe multiple antimicrobial drugs at the same time, since drug mixtures can have more extreme side effects for patients. But researchers are investigating regimens in which drugs would be used one after another -- first drug A, then drug B, then A, and so on.

The issue is urgent. Drug-resistant microbes continue to arise, while the pace of new antimicrobial drug discovery has slowed to a crawl.

"We are trying to see if we can translate what happens in nature -- how insects use antibiotics, antifungals -- to our purpose," said Marvasi. "We need to learn how better to use what we have."