Cells exposed to an inflammatory signaling molecule are quicker to commit suicide -- but speed can lead to mistakes.
Image 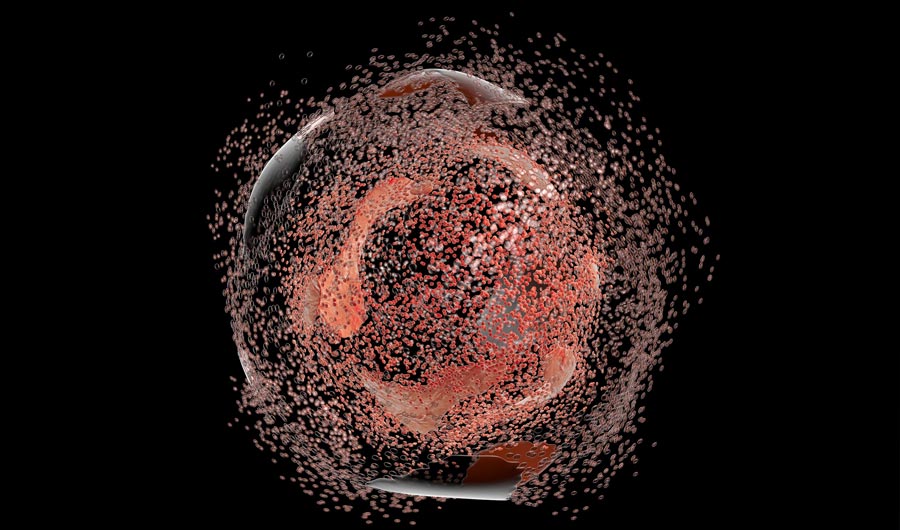 Cells may commit suicide if they sense that they could be infected with a virus.

(Inside Science) -- A molecule that triggers inflammation may send cells into a panic-like state, prompting them to rush decisions about when to commit suicide, according to new research. This could help quell viral infection by ensuring infected cells die before new viruses are released. But it appears to come at a cost: Uninfected cells sometimes kill themselves by mistake.

The new study, which was presented in March at a virtual meeting of the American Physical Society, focused on the effects of a signaling molecule called tumor necrosis factor alpha, or TNF. TNF is one of the messengers the immune system uses to ramp up inflammation.

Past research has shown that TNF boosts two opposing processes: one that encourages cellular suicide, also known as apoptosis, and one that tells cells to go on living. Under normal conditions, the two signals tend to cancel each other out, although cell death rates are often slightly higher in the presence of TNF, said Jennifer Oyler-Yaniv, an immunologist and systems biologist at Harvard Medical School. Researchers have wondered what the point is of having a molecule that sends contradictory messages.

"We call it a paradoxical molecule," said Robin Lee, a systems biologist at the University of Pittsburgh School of Medicine, who was not involved in the study. "Why does the same thing -- the same molecule, the same signal in the cellular environment -- do two completely opposing things?"

Oyler-Yaniv may have found part of the answer while experimenting with mouse cells infected with a herpes virus. Even before crunching the numbers, she and her colleagues could see that the cells died much faster when they were exposed to both TNF and herpes than they did with either herpes or TNF alone. In the presence of TNF, infected cells were exploding so fast the virus appeared unable to spread.

"We were like, 'wow, that's so clear, it just sort of jumps out of the video at you,'" said Oyler-Yaniv.

A mouse cell explodes and dies after being infected with a herpes virus and exposed to the inflammatory signaling molecule TNF. The blue spots are cell nuclei (stained with a dye called Hoechst), the pink is HSV-1 (a herpes virus), and the green is the marker of cell death. Credit: Jennifer Oyler-Yaniv, Alon Oyler-Yaniv and Roy Wollman, UCLA.

That observation prompted the lab to shift its focus to what had previously been a side project. The researchers confirmed the results with both connective tissue cells and mouse retinas, using fluorescent markers to measure the exact time between when a cell became infected and when it died.  They also ran computer simulations to determine how the speed of cellular suicide might alter the course of infection. The simulations showed that as long as the average time between infection and death is shorter than the average time it takes a virus to complete its lifecycle, an infection can't take over.

But TNF also caused uninfected cells to die at higher rates. While the researchers can't be sure what the findings mean, they think TNF makes cells more sensitive to other signals of infection, such as the presence of viral molecules in their cytoplasm. A few molecules may be no problem, but increasing numbers mean an increasing chance the cell is infected with an active virus. If such signals build up beyond a certain threshold, the cell assumes it's infected and commits suicide. TNF lowers that threshold, increasing the chance that a healthy cell will kill itself.

"It puts you into this trigger-happy cell state," said Oyler-Yaniv.

If such a system exists, it could help the body evaluate the risk of infection, "sort of like those little Smokey the Bear signs that say, 'your wildfire risk today is high,'" she added. When TNF warns that infection risk is high, cells would be more likely to assume the worst-case scenario. A preliminary version of a paper describing the findings is available on the preprint server bioRxiv, and Oyler-Yaniv said it has been accepted for publication in a peer-reviewed journal.

Lee called the study "elegant." He and others had previously shown that cell death rates often spike when cells are faced with TNF and some kind of stressor at the same time. But the idea that TNF jolts cells into a fast-but-error-prone decision-making mode is novel, said Lee, and it could have broad implications beyond viral infections. TNF is known to play complicated roles in many different conditions, from cancer to autoimmune diseases like rheumatoid arthritis and Crohn's disease.

Oyler-Yaniv suspects there may be speed-accuracy tradeoffs at work in other parts of the immune system as well. Such tradeoffs could help explain why chronic inflammation leads to health problems. If cells are constantly making split-second decisions, mistakes could eventually pile up, causing other bodily processes to fall apart.