The Tech Behind Smart Guns

Safer gun technology may one day be available to consumers.
Image 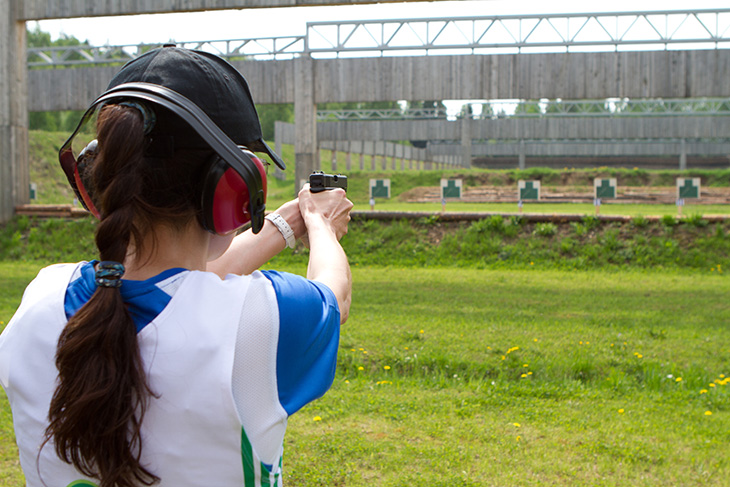 (Inside Science) -- In the 2012 movie Skyfall, James Bond received a special gift from his gadget supplier Q: A gun that would only fire when his palm was wrapped around it. Researchers are working on "smart guns," which would include similarly inspired technology that could make them safer than traditional firearms. President Obama even mentioned the technology in his State of the Union Address this year.

Proponents say smart guns could prevent toddlers from shooting their family members or themselves as well as prevent police officers’ guns from being used against them. According to a study published last year in the journal Injury Epidemiology, around 110 children are killed in unintentional shootings each year. And the Centers for Disease Control’s data show that between 14,000 and 19,000 people are injured in firearm accidents each year.

To integrate smart tech into guns, some companies have turned to radio-frequency-identification devices (RFID). With these weapons, a gun is embedded with a chip reader, and the owner wears a corresponding chip – usually in a ring, badge or bracelet. When the chips are close together, a code passes between them and the gun can fire.

In 2014, German gun maker Armatix released an RFID-based smart gun called the iP1. The .22-caliber pistol pairs wirelessly to a watch, which must be within 15 inches of the gun. Helmut Brandtner, Armatix’s managing director, said the company faced heavy opposition from gun owners when it tried to introduce its gun in the United States. The pistol is still difficult to find in American gun stores, though the company said more will be available this spring.

Armatix is also developing a 9mm smart pistol. The first shooting tests have taken place successfully, Brandtner said, and he projects the pistol will be ready to launch by the end of 2016.

Many current research efforts are also focusing on biometric technology -- using qualities of a gun owner's body to verify identity.

One of the simplest examples is smart locks that only recognize an authorized user. That’s what Identilock, a product created by Omer Kiyani, does.

Kiyani spent many years in the car safety business, making airbags safer. He said that a better gunlock is just a natural extension of his previous work. Identilock functions like a tiny safe, using a person’s fingerprint to quickly open a clamp surrounding the gun before the weapon will fire. The system can store up to nine unique sets of prints.

Other technology integrates fingerprint scanners into the guns themselves. One such example is the prototype developed by Kai Kloepfer, a teenager from Boulder Colorado, whose work was inspired by the mass shooting in Aurora, just miles from his home. 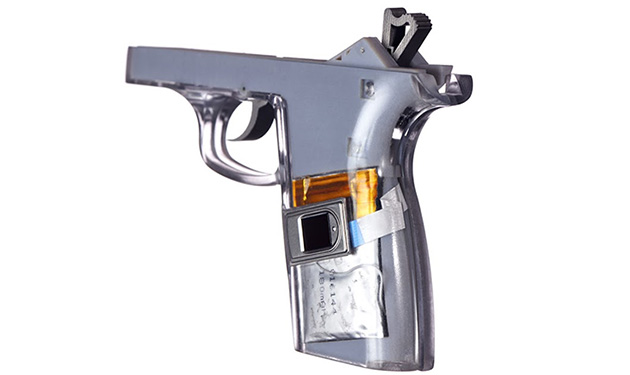 He began researching using iris recognition to signal the gun to fire, but soon discovered that most gun users wear eye protection -- either sunglasses or goggles -- which distort the image of the eye. The next logical option was fingerprints, said Kloepfer, because the biometric technology to sense them was established and readily available. His prototype uses a sensor that passes a very small electrical current through the fingerprint, which conducts electricity through the ridges and not to the valleys, creating an image, he explained.

Kloepfer won a $50,000 award from the Smart Tech Challenges Foundation, a non-profit group that is trying to foster innovation in firearm safety. He has also launched a crowd-funding campaign to raise money for his prototype. He said that he favors biometrics over RFID-style smart gun locks. “By incorporating the technology into the firearm, it’s impossible to forget,” he said. “A smart gun is always locked unless you intend to use it.”

The fingerprint-based technology does have some drawbacks. It doesn't work well, for example, when hands are wet or dirty. But Kloepfer, who has been admitted to MIT and deferred for a year to work on the project, said the technology is improving all the time.

Other research efforts have focused on more subtle biometrics. At the New Jersey Institute of Technology, in Newark, Donald Sebastian has been researching smart gun technology for a few decades.

Sebastian and the NJIT team’s research focuses on grip biometrics. The technology they're developing shares some similarities with a familiar way of authenticating a person's identity. When you electronically sign your receipt at the supermarket, for example, "the system is really noticing the way you write," he said, in particular the way you hold the stylus and not your handwriting.

That's because a person’s grip and hand placement is a learned behavior unique to him or her – something that is transferred back to muscle memory.

Each person's grip and hand placement has a pattern that’s magnified through a unique bone and muscle structure, creating a combined physical and behavioral biometric. “When it comes to a gun, the way each person holds the grip of the gun is measurable,” said Sebastian. The unique grip-print depends on a person’s hand size, finger length, and how much pressure the fingers exert on the gun, he explained. Their demonstration prototype integrates grip-based biometrics into a gun – something they call Dynamic Grip Recognition. The NJIT researchers say the next steps are to create a smaller battery pack and update the electronics on their prototype – if they get the resources to pursue the project (funding interest dried up a few years back, Sebastian noted).

“We need to decouple the conversation of gun safety from gun control,” said Sebastian, adding that smart guns aren’t gun control – they just add a level of electronics to reduce the likelihood that a weapon will be used improperly.

In fact, said Kloepfer, smart guns can offer something to all parties – a safer society. “If done properly, smart weapons could present a viable safety option with no downside to the owner.”