When It Comes to Nutrition, Don't Forget Your Microbes

Gut microbes compete with their host for a nutrient called choline.
Image 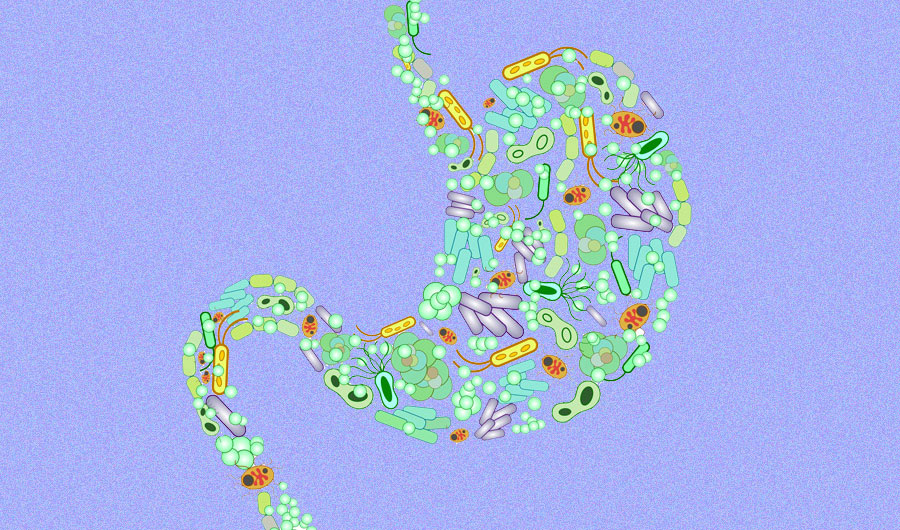 (Inside Science) -- Inside and out, your body teems with trillions of microbes. These tiny critters -- collectively called your microbiome -- play an outsized role in your life.

Your microbes affect digestion, the immune system, and even behavior. Scientists have linked an imbalance in the gut microbiome to diseases such as obesity, diabetes, irritable bowel syndrome and colon cancer. They're just starting to tease apart how exactly microbes wield such influence.

One way, they're finding, is that gut microbes can compete with your body for nutrients. "They get access to our food before we do," said Kym Romano, a graduate student in microbiology at the University of Wisconsin-Madison.

Romano has been looking at an important nutrient called choline, a molecule needed for various biological functions -- including as a key ingredient for the membranes that enclose every cell.

In a new study, Romano and other researchers at the University of Wisconsin and at Harvard University in Cambridge, Massachusetts, show that choline-consuming microbes in mice can cause signs of metabolic disease and stark changes in behavior. The effects even pass on to the next generation, as the offspring also behave abnormally with what seems like heightened anxiety.

"There's an underappreciated aspect of microbial metabolism of choline," said Federico Rey, a microbiologist at the University of Wisconsin. Even if you're getting enough choline in your diet or taking supplements, microbes may be depleting your choline supply, which can affect health.

It's still too early to derive specific health recommendations from this study, Rey said. But the findings, published recently in the journal Cell Host and Microbe, suggest that doctors and researchers should take microbiomes into account when evaluating choline intake.

Choline is found in foods like eggs, meat and soybeans, and too little may lead to liver and heart disease. When researchers induce choline deficiency in lab animals and in test subjects who are fed choline-deficient diets via intravenous fluids, the potential health problems are clear.

Additional research suggests many people are not getting enough choline. One study found that as much as 95 percent of pregnant women may be deficient in the nutrient, which is critical for a fetus's brain development.

Still, there is debate in the medical community over what the recommended intake of choline should be, and it remains unclear whether choline deficiency occurs among the general population, said Stan Hazen, a doctor and researcher at the Cleveland Clinic who has studied the connection among gut bacteria, choline and health. "As far as I am aware," he said in an email, "the diagnosis of choline deficiency is extremely rare -- bordering on zero -- in the U.S."

The bigger picture of the new analysis is important, though, because it shows, in great detail, how profoundly microbes can affect a host's metabolism and their offspring, Hazen said.

The idea that microbes compete with a host for nutrients isn't new. "We've known that bacteria degrades choline. We've known choline is important. But we haven't had that clear demonstration of how much bacteria can contribute to choline metabolism," said Jake Lusis, a geneticist at UCLA. "Here for the first time we have this very nice illustration of that effect."

To show the effect, the researchers created two simplified microbiomes containing only six bacterial species, compared to the hundreds in the human gut. The first microbiome included one species of bacteria that could consume choline. In the second, the bacterium was genetically engineered so that it couldn't. Then, the researchers introduced one of the two microbiomes into mice that had been raised in special germ-free conditions and lacked their own microbe colonies. This allowed researchers to isolate the effect that the choline-consuming bacteria would have on the mice.

They fed the mice a high-fat diet -- a condition in which the animals are more sensitive to the effects of choline deficiency. They also gave the mice extra choline, to ensure they were getting enough.

The mice with the choline-consuming microbes got fatter, and their livers accumulated more oily molecules called lipids. Both are signs of metabolic disease, consistent with previous studies.

When bacteria metabolize choline, they produce a molecule called trimethylamine, or TMA. Once in the liver, TMA is oxidized, turning into trimethylamine-N-oxide, or TMAO -- a toxic molecule that's been linked to heart and kidney disease in humans.

Indeed, the researchers measured elevated levels of TMAO in the mice with choline-consuming bacteria. But the new results suggest that it's not just extra TMAO that's affecting health, but choline depletion as well.

Next, the researchers tested what would happen to pregnant mice, another condition where choline plays a big role. The mice with choline-consuming microbes were nearly four times more likely to eat their young. Both parents and offspring had more barbering behavior, a type of excessive, anxious grooming. In another possible sign of anxiety, all of the young buried more marbles -- nearly three times as many marbles as the other group.

"That is what I find to be just astounding: how big of a difference [there is]," Hazen said.

For the offspring to inherit these effects, it might be that neither they -- nor their mothers --were getting enough choline during gestation. But the mother's microbes might also be affecting how her offspring's genes are expressed.

As a fetus metabolizes choline, molecules called methyl groups bind directly onto the strand of DNA. The methyl group usually turns off whatever gene it's near. This process, called DNA methylation, is fairly permanent and common in a developing fetus. It's an example of epigenetics, in which molecules alter gene expression without tinkering with the actual genetic code.

But a lack of choline, thanks to the mother's microbes, would suppress DNA methylation, thereby changing the epigenetics of the fetus -- and, perhaps, its future behavior.

The next step is to go beyond mice. "It's studies like this that now say, 'Hey, we need to start looking at humans, '" Hazen said.