(Inside Science) – David Ferguson, an assistant professor of kinesiology at Michigan State University, talks about what it’s like to drive a race car: "It's not like driving a normal car. You're having very high speeds, drivers exposed to G loads that are higher than what NASA astronauts are exposed, in hot humid environments, and they do it every weekend."

Behind the wheel of a race car it's stressful and it's difficult. Sure, drivers need skill and stamina. And their heart rates soar. But is auto racing a sport? Ferguson has been studying the physiology of drivers for more than a decade.

"If you're driving and you see a police officer come behind you and they turn their lights on, your heart rate goes up really fast, right? It's not doing more work. It's just the adrenaline response," said Ferguson. But he says the bodies of race car drivers react differently. "We showed that when you put a continuous glucose monitor on a race car driver, blood glucose goes up. We've also measured oxygen consumption, so oxygen consumption goes up. So, you're actually doing metabolic work, so it's like an athletic sport to drive the race car. Now, in addition to this, you're in a full fire protective suit, fire protective helmet that shuts off your body's ability to cool itself," said Ferguson.

Drivers get hot and they sweat … a lot.

"We see drivers losing anywhere between four to seven pounds of sweat. That's pretty severe for any type of sport when you put it that way," said Ferguson. Drivers also contend with vibrations and high G-forces. It's challenging to keep their heads steady enough to maintain a consistent view of the track and other cars. "So if you're going through a corner and my head goes like this, that's going to affect my visual system. When you're going 200 miles an hour, you don't want to experience that, right?" said Ferguson.

Ferguson said drivers train for cardiovascular endurance and for strength in their necks, shoulders and core.

"If you're influencing your reaction time while going 200 miles an hour in a giant, heavy race car, with 30 other people around you, and you're racing this close apart from each other, it is a very skillful, very demanding sport that requires really elite athletes,” concluded Ferguson. 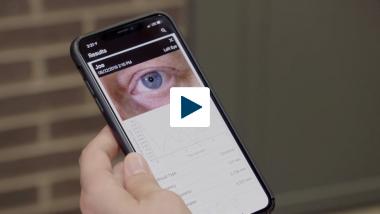