The first fracking-induced earthquake to claim human lives shows why magnitude may underestimate the danger such earthquakes pose.
Image 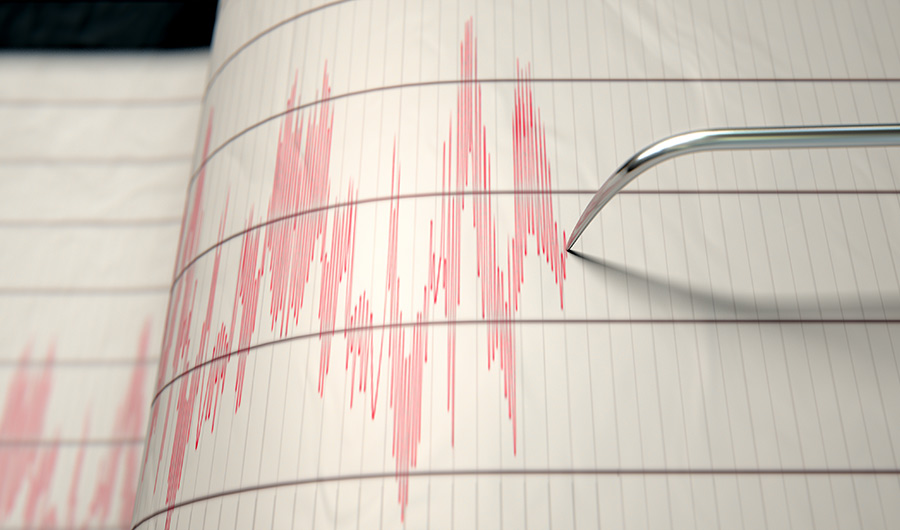 (Inside Science) -- On Feb. 25, 2019, an earthquake shook the village of Gaoshan in China's Sichuan Province, leaving 12 people injured and two dead. New research indicates the earthquake and its two foreshocks were likely triggered by hydraulic fracturing, also called fracking. If this is true, it would mark the first time in history that a fracking-induced earthquake has killed people.

The study shows why magnitude, the most common way of reporting earthquake size, could lead people to underestimate the true threat fracking-induced earthquakes might pose. The Feb. 25 earthquake was only a magnitude 4.9, which would not traditionally be considered very dangerous. But it was able to destroy older and more vulnerable buildings because it was so close to the surface -- only about one kilometer deep according to the new study. That's shallow even by fracking standards, but fracking-induced earthquakes do tend to be much shallower than natural ones.

"The shallower it is, then for the same magnitude of earthquake, the stronger the shaking," said Hongfeng Yang, a seismologist at the Chinese University of Hong Kong and senior author of the study. The findings are not yet published, but Yang and graduate student Pengcheng Zhou presented them last December at a meeting of the American Geophysical Union in San Francisco.

Fracking involves drilling wells in shale deposits, then pumping in water and other additives at high pressure to break the rock and release trapped oil. In some regions fracking can trigger earthquakes by causing faults in the rock to slip. The slipping happens either because fluids seep into the fault itself, or because the weight or volume of the fluid presses against the fault indirectly, said Thomas Eyre, a seismologist at the University of Calgary in Canada.

Most fracking operations in North America don't cause earthquakes, and the earthquakes that do occur have generally been small. Some media reports have attributed damaging earthquakes in Oklahoma to fracking, but experts believe most of those earthquakes were caused by wastewater that oil and gas developers disposed of by injecting it deep underground. Some of the wastewater included fluids used during the fracking process, but most of it came from ancient underground aquifers, according to Mike Brudzinski, a seismologist at Miami University in Oxford, Ohio. The oil beneath Oklahoma is naturally mixed with large volumes of water, and developers must filter out the water before they can sell the oil.

Western Canada has experienced a few moderate-sized fracking earthquakes with magnitudes up to about 4.5, but they mostly occurred in remote locations far from major human settlements. And even in western Canada, only about one in 300 fracking operations causes earthquakes large enough for a person to feel, said Eyre.

"In North America at the moment, we haven't had any hydraulic fracturing-induced earthquakes that have actually caused any damage," said Eyre.

It's a different story in China, however. Several recent studies have shown that the fracking boom that began in about 2014 is triggering destructive earthquakes in formerly tranquil parts of China's Sichuan basin. For example, a magnitude 4.7 earthquake on Jan. 28, 2017, a magnitude 5.7 on Dec. 16, 2018, and a magnitude 5.3 on Jan. 3, 2019 were all caused by fracking, according to published research. The 2018 earthquake injured 17 people and damaged more than 390 houses, nine of which collapsed.

The deadly February 2019 event included a magnitude 4.9 main shock and two smaller foreshocks of magnitudes of 4.7 and 4.3. Using seismic sensors and satellite data, Yang, Zhou and their colleagues found that the foreshocks occurred on a previously unknown fault located within half a kilometer of a fracking well. The foreshocks were between 2.5 and 3 km underground, the same depth where fracking is typically conducted in this region. The main shock struck about eight hours later, on a different, shallower fault a short distance away. The findings suggest that the first two earthquakes and the fluid pumped during fracking may have combined to change the pressures in the rock, causing the second fault to slip.

"It looks to me like some very solid research," wrote Art McGarr, a seismologist with the U.S. Geological Survey in Menlo Park, California, in an email, after reviewing a digital copy of the researchers' poster. McGarr has studied induced earthquakes extensively, and was one of the researchers who conducted a recent paper attributing prior Sichuan Basin earthquakes to fracking.

The magnitude 4.9 earthquake last February damaged buildings in Gaoshan in part because the buildings were old and not designed for earthquake safety, said Yang. The location was densely populated and didn't have a history of dangerous earthquakes, so it was highly vulnerable.

But even so, the earthquake would have been less damaging had it occurred 5 to 20 km underground, as most natural earthquakes do, according to Brudzinski. Instead, it occurred about a kilometer underground, with hardly any rock to absorb the shock before it reached the surface. Most fracking-related earthquakes are less than 5 km deep.

"We always pin everything on the magnitude, so that can be kind of misleading," said Pradeep Talwani, a geophysicist at the University of South Carolina in Columbia. According to Talwani, people in Gaoshan probably felt more shaking from the shallow magnitude 4.9 quake than someone in Seattle would feel from a natural magnitude 6.5 earthquake that struck deep beneath their feet.

Magnitude is a measure of the total amount of energy released during an earthquake, and researchers estimate it by calculating the surface area of a fault and the distance it has slipped, said Brudzinski. What actually matters to a person on the surface is how much the ground they're standing on shakes and how that affects structures around them -- a concept known as intensity, which researchers estimate using a variety of scales. Intensity depends in part on the earthquake's magnitude, but also on its depth, lateral distance away, and the types of rock and soil in the area.

"Right now, most regulations are still based on the magnitude. But there's a recognition now, a growing recognition, that the true risk is related to what kind of structures are there, what kind of soil they're built on, how shallow those earthquakes might be," said Brudzinski.

After the Feb. 25 earthquake that killed two people in Gaoshan, the local government halted fracking, said Yang. But in surrounding parts of the Sichuan Basin, fracking continues. According to online reports by the China Earthquake Administration, several more damaging earthquakes struck the region later in 2019:

• A magnitude 5.4 on Sept. 8 in Weiyuan County that killed one person and injured 63

• A magnitude 5.2 on Dec. 18 in Zizhong County that injured at least nine

Yang, Zhou and their colleagues have not yet analyzed these earthquakes, and according to Zhou, it is not yet clear whether they were fracking-induced. The Chinese government has denied that the June 17 earthquake that killed 13 people was caused by fracking, according to reporting by Reuters. A recent study suggested it may have been triggered by a combination of salt mining and a previous fracking-induced quake.

Despite multiple attempts over several weeks, Inside Science has been unable to obtain comment from anyone affiliated with the China Earthquake Administration regarding either the earthquakes in 2017, 2018 and early 2019 or the more recent ones that haven't yet been analyzed in detailed studies. The administration has reported greater depths for Sichuan Province earthquakes than would be expected if they were caused by fracking. However, those numbers don't match up with the shallow depth estimates from detailed studies, including Yang and Zhou's research and several published studies that included China Earthquake Administration researchers as authors.

Yang said he wasn't surprised that the depth estimates differ. He explained that the China Earthquake Administration's online reports use estimates that are generated automatically using a network of stationary seismic sensors and a general-purpose model. He claimed that his own study and other studies that have pinpointed shallower depths are much more accurate. That's because they use additional data sources and models that are customized for specific locations, he said.

It's unlikely that any of the earthquakes highlighted in this story occurred naturally, according to McGarr. The northeastern edge of the Sichuan basin has long been prone to earthquakes because it is bordered by a large, active fault. But the fracking is happening further to the south and east, where natural earthquakes are rare.

"It used to be a very stable region," said Yang.

Researchers in the U.S. are taking note. No fracking-induced earthquakes in North America have exceeded magnitude 5 so far, and they may still be unlikely to do so, given differences in the local geology, said Brudzinski. But most are quite shallow, only about 2-4 km belowground.

In the past, said Brudzinski, researchers have debated whether there might be something about the fracking process itself that keeps earthquakes small, ensuring some measure of safety despite the shallow depth. The recent tragedies in China suggest that people shouldn't depend on that as a safeguard.

"To me, that has been sort of the most important aspect of what I've seen from China," said Brudzinski. "It suggests that, yes: We can have some larger-size events."