Will astronomers learn anything new when a total solar eclipse cuts a path of darkness across 14 states this month?
Image 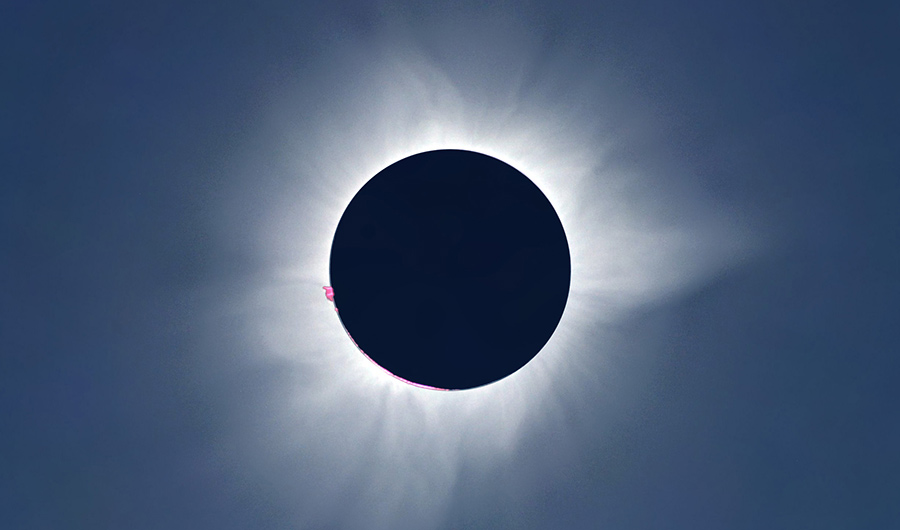 A composite image of short, medium, and long exposures of the total eclipse of March 9, 2016, as observed from a ship off the coast of Indonesia.

(Inside Science) -- On August 21, a solar eclipse will pass over the United States. It will begin in the early morning over Hawaii, extend past Alaska and continue all the way to the Atlantic Ocean. Residents of every state will have the chance to view the moon’s shadow cover at least part of the sun.

The ultimate spectacle of totality, in which the moon blocks out all but the wispy solar atmosphere, or corona, will appear as a band 60 to 71 miles wide, taking about 90 minutes to travel across 14 states, from Oregon to South Carolina. Along that path, complete darkness will last for up to 2 minutes, 40 seconds.

Millions of spectators -- including hundreds of professional and amateur astronomers -- will gather under the path for the opportunity to experience the event.

Beyond the spectacle, there’s a key scientific question: What can astronomers possibly discover from solar eclipses that they haven’t learned already? After all, they’ve been analyzing eclipses for at least 300 years. And at least two occur every year, many in reachable parts of our planet.

The answer to the question: A lot.

“If you were a heart surgeon allowed to look inside a human heart only for two minutes every two years, you’d look again if you got a chance two years later,” explained Jay Pasachoff, an astronomer at Williams College in Williamstown, Massachusetts, who is preparing to observe this eclipse, his 66th, from Salem, Oregon.

“The sun is different every time,” he added. “We’re back in a solar minimum for the first time in about ten years.” That’s the time of least activity on the sun during the roughly 11-year solar cycle.

Just as important, methods of observing eclipses continue to improve.

“We have all kinds of new instrumentation,” Pasachoff said. “We’ll get more sensitive views at higher speed.”

The instrumentation includes improved infrared imaging tools and other new means of studying magnetic fields in the sun.

Researchers plan to use ground-based telescopes and radars, aircraft, balloons, and orbiting satellites to collect data during the hour and a half the eclipse takes to travel across the U.S.

That data will provide fresh understanding of the sun and its surroundings.

“This is a natural controlled experiment that nature has provided to us,” said Madhulika Guhathakurta, an astrophysicist at NASA’s Goddard Space Flight Center in Greenbelt, Maryland, who is the space agency’s lead scientist for the eclipse. “We have a tremendous opportunity to collect ground-based observations on the effects of cutting off solar radiation.”

Although the period of totality at any single location is brief, the eclipse's path over so many accessible viewing sites will allow astronomers and their scientific colleagues to combine data collected at many different points. And the number of observing sites will ensure tangible observations despite cloudy weather that might obscure the event in some regions.

That will hardly appeal to observers who miss the show. “The problem is that you don’t get a second chance,” said Paul Bryans of the National Center for Atmospheric Research in Boulder, Colorado, who will be studying his first eclipse from Casper, Wyoming.

Bryans’s group is one of several that will focus on the corona, the wispy solar atmosphere that the sun’s light overwhelmingly outshines, making it visible only during eclipses.

The corona puzzles astronomers because its temperature increases from about 5,500 degrees C at the solar surface to millions of degrees farther out. Intuitively, temperatures should decrease with distance from the hot sun.

“For me and a lot of others, one of the biggest topics is why is the corona so hot?” said Amir Caspi of the Southwest Research Institute in Boulder, Colorado.

Astronomers have two main theories for the strange behavior. Either what are called Alfvén waves transfer heat along magnetic fields in the corona or huge numbers of tiny explosions called nanoflares combine to create a huge heating effect.

To try to differentiate between the theories, Caspi’s team will use cameras in the nose cones of NASA WB-57 jets to take high-speed, high-resolution videos of the corona as they fly along the path of totality. “That will allow us to see motion and waves that would be invisible from the ground,” Caspi said.

Bryans, meanwhile, will use three instruments -- an interferometer, an infrared camera and a polarizing camera -- to study the infrared part of the corona. “That’s because infrared wavelengths are more sensitive to magnetic fields,” he explained.

The study could help astronomers better understand space weather and its potentially disruptive impact on communications and the power grid.

“We want to predict when we can prepare for solar eruptions by putting satellites in safe mode and shutting down power grids,” Bryans said. “We want to measure these magnetic fields to find the structures most likely to erupt.”

But eclipse observations won’t focus entirely on the sun and its corona.

“We’ll be making measurements on how the abrupt shutting off of sunlight affects Earth’s atmosphere and generates gravity waves,” Pasachoff said.

Douglas Drob and Joseph Huba, atmospheric physicists at the Naval Research Laboratory in Washington, D.C., will use observations from satellites and instruments on and launched from the ground to study the physics of Earth’s upper atmosphere as its temperature falls during the eclipse.

Eclipse experiments even extend to zoology. The California Academy of Sciences offers an app, iNaturalist, that anyone can download to study the eclipse’s influence on the behavior of living things.

The academy asks “citizen scientists” who use the app to select individual animals or plants and observe and photograph their behavior 30 minutes before and after the eclipse and during totality itself. The data and photos will provide the academy with detailed records of organisms’ behavior during eclipses; at present, such records are largely anecdotal or obtained only from captive animals.

Another non-astronomer -- retired California physicist Don Bruns -- plans to repeat the most famous eclipse experiment of all: British astronomer Arthur Eddington’s confirmation on May 29, 1919 that the sun's gravity bends the light of other stars, as predicted in Albert Einstein’s general theory of relativity.

Bruns has equipped a telescope to take very precise images of stars during totality. Those will indicate the extent of deflections in their apparent position, caused by the sun. But Einstein fans shouldn’t worry -- multiple other astronomical and non-astronomical experiments have consistently confirmed the general theory.

What about those unfortunate scientists who miss this month’s eclipse because of poor weather or other circumstances?

They won’t have too long to wait for the next one. They can prepare for eclipses in Chile and Argentina in 2019 and 2020. And if they want to stay stateside, a total solar eclipse will travel from Texas to Maine in 2024.