Even in a perfect environment, DNA still needs defenses against oxidation.
Image 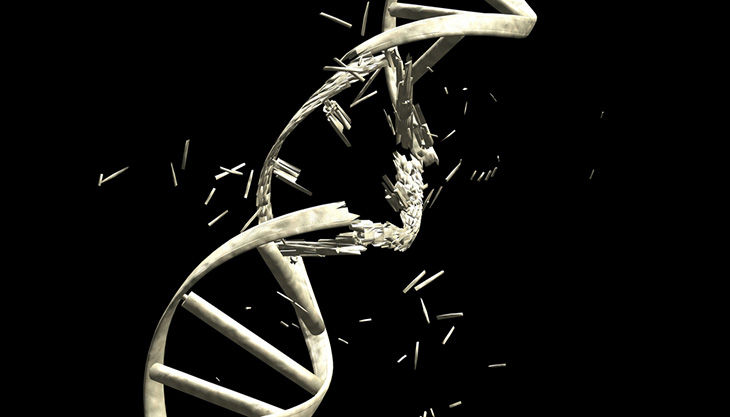 (Inside Science, Currents) -- A few months back, the 2015 Nobel Prize in Chemistry was awarded to three scientists who discovered DNA's remarkable ability to repair itself after damage from all manner of assaults.

A new study published in the November 3 issue of the Proceedings of the National Academy of Sciences found that DNA has built up most of its defenses against the everyday damage from oxidation, a result of the normal workings of the human body.

As cells grow and reproduce they will occasionally mutate. Sometimes the mutations are due to some sort of stress from the environment. For example: UV radiation will cause the DNA in skin cells to mutate. To defend itself against UV radiation, the DNA develops a way to repair itself from that particular mutation. Scientists call this a repair pathway. Each mutation needs a unique repair pathway. If no pathway can be found or the damage is too great for the DNA to keep up, permanent damage can result. In the case of UV radiation, this can mean skin cancer.

But, even under perfect conditions, DNA still mutates.

"When a cell is growing normally, it accumulates mutations at a fairly low but none the less detectable rate. And the question is: Why?" said Patricia Foster, a biologist at Indiana University in Bloomington and lead author of the study.

For the study, Foster and her team investigated 11 specific repair pathways that she knew were important to DNA. She wanted to know what would happen if she turned each pathway off, one by one. How would the DNA react? Would it mutate? Would the cell be left unaffected? She posited that if the DNA was unaffected by the loss of a repair pathway, then the pathway must not be crucial for everyday function. But if the DNA mutated, she knew it was essential to the DNA's health.

Foster meticulously tested many thousands of generations of bacteria with particular pathways turned off. She found that only when pathways that allowed for the prevention or repair of oxidative damage were turned off did she see a significant increase in mutation. This means that, assuming nothing else was harming the cell – UV radiation, for example, or other external circumstances – the repair pathways that protect an organism from oxidation were most important to the health and integrity of the DNA.

Oxidation is a result of the body using oxygen to function.

"The final thing in the process of respiration is to break apart oxygen and that causes the oxygen to be dangerous … because it's reactive," explained Foster.

"Living in air means that you're always creating these potentially dangerous molecules that have to be dealt with," said Foster.

The study was done on the bacteria E. coli, which, according to Foster is an excellent organism for studying DNA.

"What happens in bacteria you can pretty much guarantee is going to happen in all organisms," said Foster.

This particular study is unique in part because it used the entire genome in its testing.

"This was a fairly long study. We started this five years ago. We just went through very systematically and eliminated the DNA repair pathways that I knew existed to see if that would change the rate or the pattern of changes that occurred," explained Foster.

"It's a real community," said Foster.

Foster's next project will focus on what happens to cell's DNA molecules when you starve them.