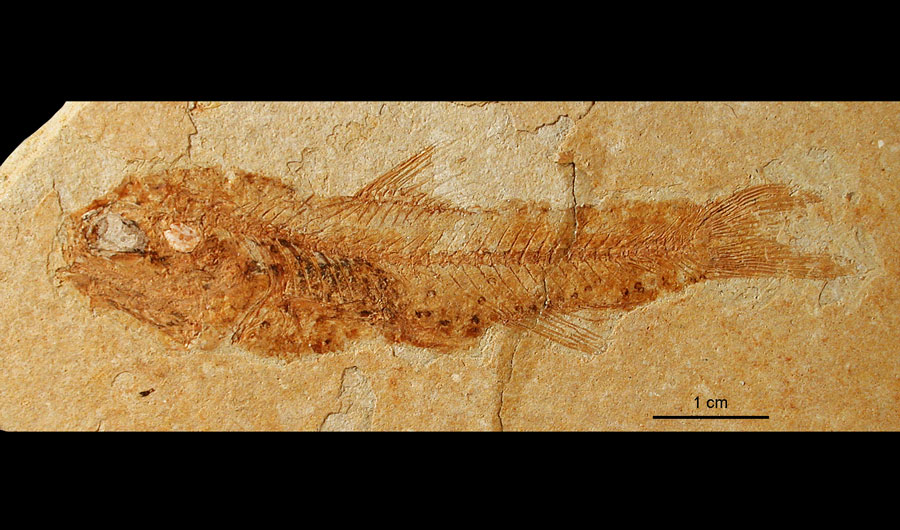 (Inside Science) -- Lanternfish are known for the bioluminescent organs known as a photophores that guide them through the deep sea. In some species of this group of fish, the organs shine like underwater car headlights. But these finger-sized fish are also one of the most abundant vertebrates on the planet in terms of sheer biomass, on land or sea.

How did they evolve to become so successful? New research on components of their ears reveals that the success of lanternfish may have begun when the continent of Antarctica began drifting off on its own, and because of the development of grass on land tens of millions of years ago.

Werner Schwarzhans, a geologist and paleontologist with the Natural History Museum of Denmark, and his co-author Giorgio Carnevale, of the University of Turin in Italy, examined thousands of otoliths mostly from the lanternfish genus Diaphus for a study published recently in the journal Paleobiology. Otoliths are a component of fish ears that can be used to identify species by comparing them to those of modern lanternfish and the fewer well-preserved complete skeletons scientists have discovered from the past. Otoliths are also one of the most numerous bones in the fossil record -- the only thing identifiable of many extinct lanternfishes are these ear bones.

The researchers compared otoliths from various parts of the world in large quantities to get a better understanding of when lanternfish evolution really took off in the ocean.

The earliest remains of lanternfish date to a single species from the Paleocene, about 66 million to 56 million years ago. After this, more species begin to appear. The researchers found that during the Middle Eocene, which started about 48 million years ago, these fish mostly lived in shallower areas. But the oceans began to change drastically after the Eocene, as Antarctica began to split from South America and Australia, resulting in new currents and an influx of silica from deep water throughout the oceans in a type of "nutrient pump" starting as early as 38 million years ago, Schwarzhans said.

Lanternfish don't eat silica, but the copepods and other zooplankton they do eat feed on smaller phytoplankton like diatoms, which do use silica. Diatoms likely proliferated with the increase in silica, as did the copepods that eat them. Schwarzhans and his co-author believe lanternfish moved into the deeper ocean to take advantage of the copepod buffet.

Schwarzhans and his co-author found that between 25 million and 11.6 million years ago, lanternfish size decreased but the number of species blossomed.

But in the Late Miocene, 10 million years ago, warm season grasses had begun to cover land, and wildfires quickly followed, producing phosphorous and silica that washed into the oceans. Erosion from the newly formed Himalayas provided even more silica.

Rene Martin, a graduate student at the University of Kansas who studies the evolutionary history of lanternfish but was not involved in this research, said she really enjoyed how the authors used otoliths.

"I appreciated the fact that they're able to use the fossil record to get a different picture of the evolution of this group," she said. "It ties very well in with our understanding of the diversification of the species."

Matthew Davis, a biologist at St. Cloud State University in Minnesota, also not involved in the study, said that looking at otoliths is a good way to approach the evolution of this group. "For a lot of deep-sea or open-ocean taxa, looking at the fossil record can be a bit difficult due to the nature of fossilization," he said.

Two journeys from the same place

Lanternfish weren't the only creatures that took advantage of the proliferation of silica and plankton. The largest mammals also diversified around the same time.

Baleen whales took advantage of an abundance of copepods. As grass increased on land and silica increased in the oceans, baleen whales diversified into a number of different species and became much larger in the process.

What's curious is that whales and lanternfish seem to have adopted such different strategies. Lanternfish average about 10 centimeters -- the size of a finger -- while baleen whales like blue whales are the biggest creatures ever found on the planet. It may seem counterintuitive that these two groups evolved in such different ways, but Martin says they started from very different sizes, and it would have taken a lot longer for lanternfish to grow so large.

Whatever made them successful in the first place still works today, as both baleen whales and lanternfish are found throughout the oceans, both feeding mostly on copepods. The main difference in diet is that whales engulf massive clouds of copepods while individual lanternfish pick away at the phytoplankton in schools that can be larger than a single whale.

Just as lanternfish responded to big changes in climate and ocean content in the past, they can be used as a way to indicate ocean health today, Davis said. Human-caused climate change patterns could impact the number of these fish, and some studies have tracked how lanternfish ingest plastic as a way of understanding how the material gets into the food web in the open ocean.

"The big takeaway of this study is that climate, just as it does now, was probably impacting how some of these fishes were succeeding and distributing themselves over wide swaths of time," Davis said.