The carnivores play a unique role in breaking down calcium, phosphorous from prey.
Image 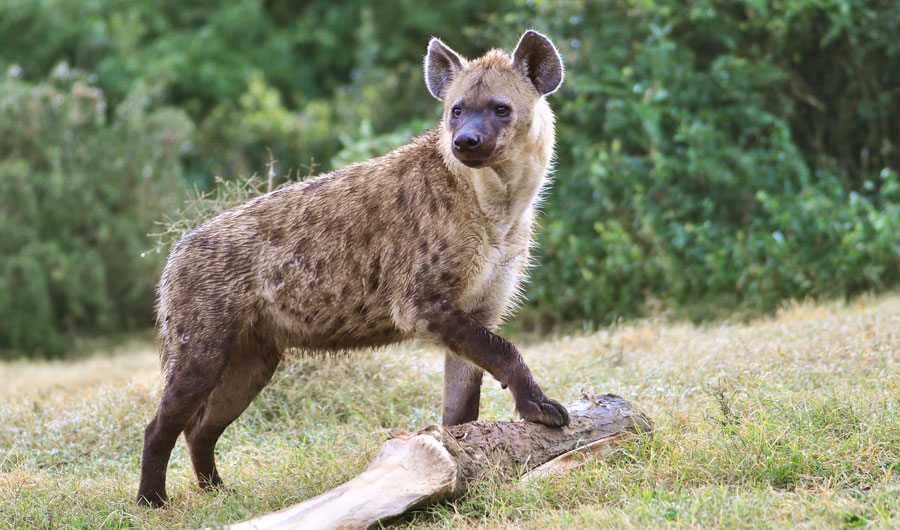 A spotted hyena with the remains of an elephant's leg.

(Inside Science) -- The crushing jaws of hyenas may act as a kind of nutrient blender, grinding out calcium and phosphorous from bones and dumping them back into the relatively poor soil of the Kalahari Desert.

Researchers had noticed that carnivores like wild dogs and cheetahs have a curious way of recycling nutrients back into the landscape. When they eat prey, these animals will spread components like iron found in blood around the kill site while eating. They will also poop out other nutrients.

Hyenas eat plenty of meat, but they also crunch bones like none other to get at the marrow.

"Hyenas have one of the strongest jaw strengths of any terrestrial carnivore," said Andrew Abraham, a postdoctoral researcher at Northern Arizona University in Flagstaff.

Abraham and his colleagues wanted to see whether hyenas, which are unique in their predilection for bone chomping, redistribute the calcium and phosphorous found in larger quantities in skeletons.

The nutrients are evident to the naked eye, giving hyena feces a white color. Hyenas often poop in latrine areas that mark the edges of their territory, sometimes near roads were other animals often travel. Abraham and his colleagues could easily identify these "white blobs of fecal matter" while driving.

A previous study of theirs had estimated phosphorous and calcium presence in the bones of various animals in South Africa. In the new research, published in the African Journal of Ecology, they looked at brown hyenas in Tswalu Game Reserve in the southern Kalahari Desert in South Africa as well as spotted hyenas in Manyeleti Game Reserve near Kruger National Park. They estimated how much hyenas would need to eat to stay alive, then calculated how much calcium and phosphorous came out the other end.

They came up with an overall estimate of these nutrients per square kilometer, and compared it to other sources such as phosphorous that came from eroding rocks or dust blown through the atmosphere. They found that hyena dung contained between 1,000 and 20,000 times as much calcium and phosphorous as local soils.

Hyenas' eating habits also spread the nutrients around in another way, as they leave behind a lot of smaller splintered bones that creatures like birds take advantage of, according to other research.

"Birds that didn't have access to those splinters tended to get a lot of metabolic diseases related to phosphorous or calcium deficiency," Abraham said.

These added nutrients are critical in the relatively nutrient-deficient Kalahari Desert, Abraham added. Calcium and phosphorous get consumed by plants and microbes, then work their way up the food chain to larger creatures.

"They're the building blocks of life," he said. "People think about hyenas as the villains of the world. … This is actually kind of spinning things on their head."