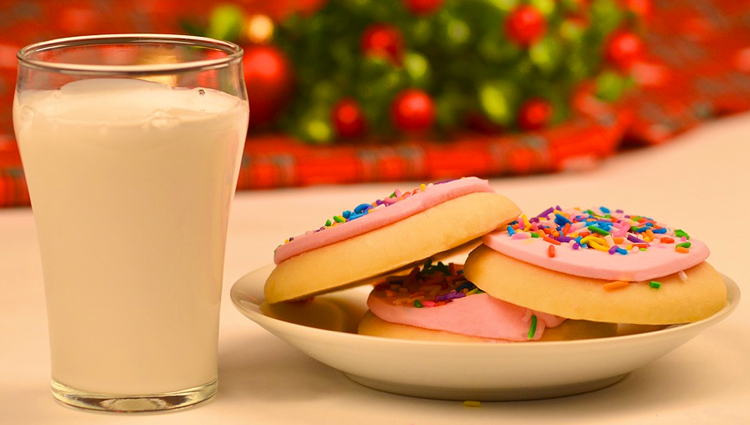 From the staff of Inside Science, we'd like to wish our readers happy holidays. What follows is a seasonal story from our archive. It's actually one of my first stories for Inside Science News Service, written four years ago. It was a blast to write -- and gave me a chance to do ask scientists some interesting questions as well as tackle some of the mathematics behind Christmas.

This story was originally published by Inside Science News Service on December 18, 2008.

When kids leave a few cookies and a glass of milk by the Christmas tree, they think they're providing Santa Claus with a much needed boost of energy for the remainder of his exhausting one-night whirlwind world tour. They probably don't realize that without taking the appropriate precautions they may be setting a trap, creating a fertile ground for bacteria and other dangers to lie in wait for an unsuspecting Saint Nick.

What's the best way to protect Santa's snack? A note telling him to go to the fridge probably won't do, as he has a tight schedule and likely won’t have time to find the kitchen. The United States Bureau of Census estimates the number of households in the country is about 112 million – even if many of those don't have kids, spending one extra second at just 50 million houses would add more than a year and a half to Santa's jaunt through the U.S.

The general rule, according to John Partridge, a food scientist at Michigan State University in Lansing, is to discard any food that requires refrigeration if it's been sitting at room temperature for more than two hours. The reason for the rule is that food must be kept cold, out of the danger zone of 41 to 135 degrees Fahrenheit. At these warm but not hot temperatures bacteria are able to reproduce rapidly, especially in foods that are moist, full of protein, and low in acidity – which makes milk a triple threat. Consuming lukewarm, bacteria-rich milk could make Santa sick and, despite his jolly reputation, giving the Claus food poisoning could launch a years-long string of coal-filled stockings.

If kids knew when to expect Santa, they would know when to put a fresh glass of cold milk out for him, but it is impossible to predict the time of his visit. Catherine Strohbehn, a Hotel, Restaurant, and Institution Management Specialist at Iowa State University, in Ames, recommend a simple solution to protect the cookies and milk tradition. "A thermal cup would help keep cold in [the milk], and could extend the period while it was lying out," she said. Covering the cup would also be a good idea to keep out dangerous airborne invaders.

Partridge explained that there is another option, if you can find ultra-high temperature (UHT) treated milk. This process partially sterilizes milk by raising it to over 275 degrees Fahrenheit for a second or two. The milk can be left in a container, unrefrigerated for months. Partridge said "I believe that for Santa Claus, a half-pint of unopened UHT milk would be the safest way to do it." While UHT milk is unfamiliar to many in the U.S., it is commonly used in Europe and in countries where reliable refrigeration is a problem.

The cookie problem is simpler. "Cookies are a very shelf-stable item," Strohbehn said. As such, kids placing a few tempting delights on a plate should follow one simple precaution: wash their hands. Following that step of basic hygiene should remove viruses from the fingers and make the cookies fit to serve. Just don't sneeze on them.

Dieticians have been known to suggest that Santa cut back on the calories, but Strohbehn said, "All foods in moderation are fine. I don't suggest that we tinker with traditions."

Easy for her to say, but all of those snacks easily explain why Santa is known as the jolly fat man. If Santa Claus eats a generous bite, say one-half of a store-bought chocolate-chip cookie at each of the 112 million U.S. homes this Christmas Eve, he will consume approximately 3 billion calories. He'd probably prefer homemade cookies, but the math is much simpler this way. At the Department of Agriculture's recommendation of 2,000 calories a day for an average person, this works out to be about 4,000 years worth of calories. Ouch!

Even if he spends much of the Christmas off-season working out, a thin Santa isn’t likely. If jolly Saint Nick's weighs 250 lbs, he would have to run 600,000 marathons to burn all those extra calories (according to Running World's calories-burned calculator).

Running several thousand more would probably take care of all the milk.