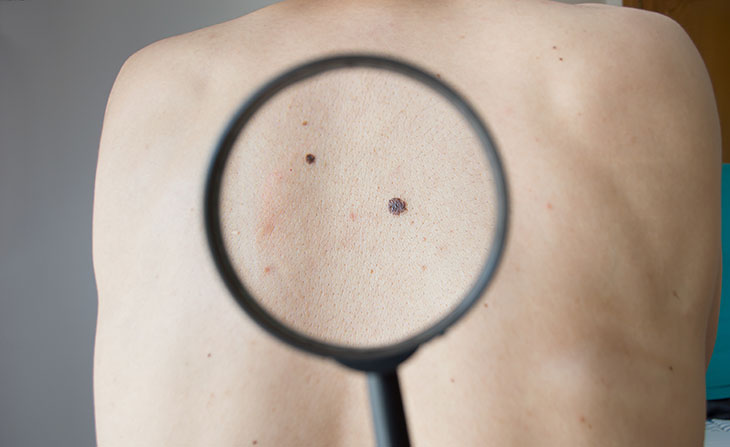 (Inside Science) -- An Anglo-Italian research team can diagnose malignant skin cancer using the Doppler effect, the same phenomenon that causes the whistle of a train to rise in pitch as the train approaches onlookers and fall as it recedes.

The team's new noninvasive technique uses a laser to measure the speed of blood flowing in the skin beneath suspicious-looking moles. Analysis of 144,000 data points connected with each individual mole revealed fluctuations in the flow, or perfusion, of blood through the tiny vessels known as capillaries. The fluctuations, revealed through the Doppler effect, helped to reveal whether or not individual patients had melanoma, the most aggressive form of skin cancer.

In an experimental trial on 54 patients, the approach identified every case of melanoma. It also ruled out the cancer in 90.9 percent of patients not suffering from it, the team related in the online journal Nature Scientific Reports.

"The method is optical, noninvasive, and easy to apply," said Aneta Stefanovska, the physicist at Lancaster University in England who conceived of the study and designed it.

Melanoma is responsible for three-quarters of all deaths from skin cancer, so new methods of diagnosing it early can be cause for excitement. "This is the first one looking at blood perfusion for the tumors," said Hooman Khorasani, chief of the division of Mohs, Reconstructive and Cosmetic surgery at the Mount Sinai School of Medicine in New York City.

However, Khorasani, who was not involved in the study, said the method will need improvement to be acceptable to dermatologists. That's because the procedure currently takes half an hour, throughout which a patient's blood must be monitored by an attendant.

"It would ruin your practice to have a patient in the room for that time," Khorasani said. "You wouldn't be able to pay your rent."

Because the laser Doppler technique does not need a biopsy to differentiate between moles caused by malignant melanoma and non-cancerous ones, the new technique could reduce the number of surgical procedures performed.

"The current diagnostic tools of examination by doctors followed by biopsy inevitably lead to unnecessary invasive excisions," said Marco Rossi of Pisa University in Italy, who planned and managed the study, in a statement.

The U.S. Food and Drug Administration recently gave provisional approval to another noninvasive method, called MelaFind. MelaFind works in the same way as pathologists who analyze biopsies, diagnosing the disease through visual cues. But it focuses on the mole on the skin rather than on a sample excised from it.

"It sends an image to a central database that gives you a probability" that it is melanoma, Khorasani said. "But it has a hard time differentiating among lesions."

To develop an alternative method, Rossi's group started with 54 volunteers who had unusual-looking moles that were possibly associated with melanoma.

"They used the ABCD criterion for what an atypical mole is," Stefanovska said. "That's Asymmetry; uneven Border; several different Colors; and a Diameter larger than six millimeters and evolving."

Margherita Pesce, a biologist in the Pisa University group, shone red laser light on the chosen moles for about 30 minutes, focusing the light on capillaries beneath the moles. Ordinarily, the flow of red blood cells fluctuates in a way that is regulated by details in the properties of the blood vessels. In melanoma, Stefanovska explained, this regulation appears to be absent; that leads to a considerably less variable blood flow signal that the laser Doppler process detected.

Gemma Lancaster, a member of Stefanovska's team, analyzed the signals, adapting an analytical technique originally used to study earthquakes. "We found that we could generate biomarkers for melanoma," Stefanovska said.

Rossi's team, meanwhile, biopsied the moles, and examined them for evidence of melanoma.

Comparison of the results revealed that the laser Doppler method identified all ten cases of melanoma revealed by biopsy and 40 of the 44 benign moles.

Stefanovska emphasized that several steps remain before the technique can be considered for routine dermatological practice.

"We will need a large clinical study if we want to make it a proper clinical tool," she said. That's because regulatory authorities require proof that new medial procedures work for large numbers of patients before approving them. "We will start applying for bigger grants" to support the research, she added. The grants will support a larger clinical study, and will enable improvements in the laser Doppler technology,

Those improvements include reducing the time of exposure to the laser. "We will be able to do it in ten minutes and still have all the reliable biomarkers," Stefanovska forecasted.

Her team has already seen two promising signs: several inquiries about the research from clinicians and medical companies and a high overall level of interest from scientists who have read the paper that describes the work.

"The method has a lot of potential," Khorasani said.