Genetic differences between forest lizards and city lizards show evolution can play out the same way again and again.
Image 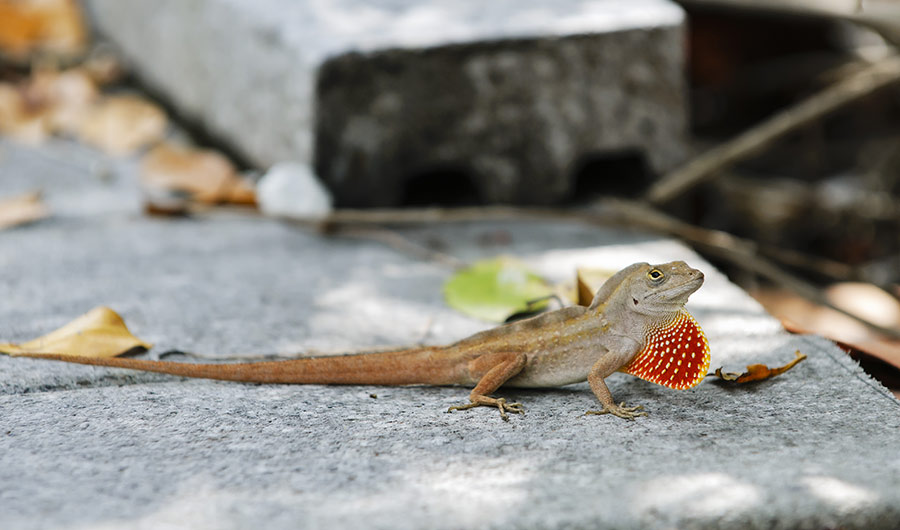 (Inside Science) -- In a famous thought experiment, the late evolutionary biologist Steven J. Gould once asked: If you could play the tape of life over again from the beginning, would it come out the same way?

"It's this question about the roles of fate and chance in shaping the world that we live in," said Shane Campbell-Staton, an evolutionary biologist at UCLA.

Now, small lizards called crested anoles are proving that evolution can indeed play out in remarkably similar ways when the same situations are repeated. The study focused on four cities in Puerto Rico: Aguadilla, Arecibo, Mayagüez and San Juan. In each location, urban lizards have evolved higher heat tolerance than their forest-dwelling counterparts. (Cities tend to be warmer than surrounding countryside because they have less vegetation and more sun-soaking surfaces like asphalt.)

With six colleagues including Kristin Winchell at Washington University in St. Louis, Campbell-Staton compared the DNA of lizards collected in cities with that of lizards found in forests. One gene in particular showed differences between the urban and city populations. This gene came in two forms that differed by one molecule, either guanine or cytosine, called "G" and "C" for short.

Nearly all the lizards had at least one copy of the "C" variant of the gene. But lizards with two copies of the "C" variant were able to endure higher temperatures. Double-C lizards were significantly more common in cities than they were in forests, a pattern than held true in three of the four cities. This suggests that on three occasions, natural selection made city lizards more heatproof in the exact same way: by making the "G" variant less common and the "C" variant more common.

The researchers also looked at which genes became active at different temperatures, and again found similarities in the ways lizards in different cities had evolved. Both lines of evidence suggest that natural selection is shaping city lizards by favoring certain genetic traits that were present but less common in the original population. This is how evolution typically works in the short term, although new mutations can also be important over longer time spans. The findings were published today in the journal Nature Ecology and Evolution.

"The current paper neatly links several experiments, with the combined output strongly suggesting that urbanization can indeed drive highly repeatable adaptive evolutionary responses," wrote Thomas Merckx, an ecologist at the University of Oulu in Finland who was not involved in the study, in an email. He added that this isn't the first study to show animals adapting to the heat of cities. For example, in 2018 researchers found that ants were losing their ability to endure cold in two of three cities they looked at. That study didn't look at the genes involved, however.

Researchers have long known that different populations of animals can arrive at similar-looking solutions to life's challenges -- a phenomenon called convergent evolution. That's why whales and seals both have streamlined bodies, even though their ancestors adopted swimming lifestyles at different times. But that doesn't necessarily mean evolution achieved that outcome in the same way both times.

Past research into the genetic details of evolution and its repeatability has mostly focused on simple traits, like coat color, that are controlled by one or a few genes, said Campbell-Staton. If there are only a few genes to choose from, it's not surprising that evolution would manipulate the same ones whenever a new coat color is needed.

In contrast, heat tolerance is controlled by hundreds or thousands of genes interacting in complex ways. Natural selection is likely shaping many of these genes at once, sometimes in different ways in different cities, said Campbell-Staton. But the new study shows that at least one of those genes has been targeted the same way time and again.

"Even though that playground of genetic variation is massive, we still see at every level -- all the way down to the single gene level -- some inherent process of repeatability," said Campbell-Staton.