Mars' Atmosphere Blew Away Billions Of Years Ago 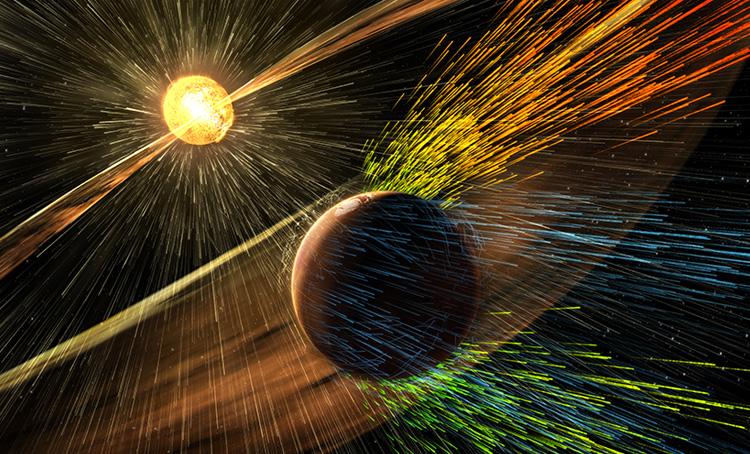 (Inside Science) -- Mars was once a habitable world like its larger neighbor Earth, with liquid water on the surface and protected by a thick atmosphere. But rather than becoming a possible haven for microbial Martians and other lifeforms, the young world lost most of its atmosphere between three and four billion years ago. In new research using a NASA space probe orbiting Mars, scientists found that intense solar storms and ejections from the sun likely swept away those protective layers.

Curry and her colleagues base their conclusions on detailed observations taken by NASA's Mars Atmosphere and Volatile Evolution spacecraft, known as MAVEN. Launched in November 2013, it reached Mars orbit in September 2014, where it continues to monitor clouds of plasma and charged particles that periodically arrive from the sun and interact with what's left of its upper atmosphere.

Like early Earth, Mars used to have a warmer climate, potentially friendly to the building blocks of life, indicated by valley networks likely carved by water flow that show up on the planet's ancient surfaces. But eons ago, its climate changed dramatically.

"All the indications are that loss of atmosphere to space has been a major process in the change in climate," said Bruce Jakosky, a physicist at the University of Colorado Boulder, and principal investigator for the mission. "We're getting at the history of habitability of Mars, and that's something we can apply to exoplanets," he said in an interview.

The sun frequently shoots out streams of charged particles, often called solar wind. It also produces solar flares and storms that hurl bursts of plasma into space, which sometimes happen to head in the direction of orbiting planets. The Earth possesses a global magnetic field, allowing it to withstand this bombardment of magnetized particles. But Mars' global magnetic field faded away about four billion years ago, removing a crucial shield for the atmosphere.

In the ensuing hundreds of millions of years, continued solar storms gradually drove away Mars' atmosphere. Meanwhile, life began to arise on Earth.

MAVEN's detailed measurements led Curry and her colleagues to attribute much of this lost atmosphere to a process simply referred to as "sputtering." This involves the charged particles in the solar wind bouncing oxygen atoms away like billiard balls. Without oxygen, there can be neither carbon dioxide for the protective atmosphere nor water.

Other processes were at play as well, stripping away Mars' atmosphere over time. Curry likens these to winds eroding a desert creek bed, but she says that the hyperactive sun in the distant past produced so many solar storms that sputtering acted more like a flood, washing away the atmosphere on a short planetary time-scale.

Some Mars-sized planets orbiting in other stellar systems, such as Kepler-138b discovered a year ago, could suffer a similar fate. "Mars is our ground truth for understanding planets this size," Curry said.

Mars' period of habitability -- at least for microbes if not more complex life -- lasted for a few hundred million years or perhaps longer. It remains difficult to extrapolate back into Martian history, however, because Mars' limited atmosphere and seasons vary so much. More importantly, the sun's activity exhibits even more variability, appearing calm one year and launching multiple ejections of plasma the next.

"How long you observe matters because of the 11-year solar cycle," said Mats Holmstrom, a scientist at the Swedish Institute of Space Physics and principal investigator of an instrument measuring solar wind aboard the Mars Express spacecraft. Mars Express has been studying the planet's lower atmosphere since 2004. It and MAVEN are on complementary missions, Holmstrom said in an interview.

If it turns out that many other planets are habitable only for relatively short time periods like Mars, Curry said, then life on a planet might have come and gone long before astronomers on Earth could notice them.