The braided ribbon on a maypole can be analyzed using a type of math called group theory.
Image 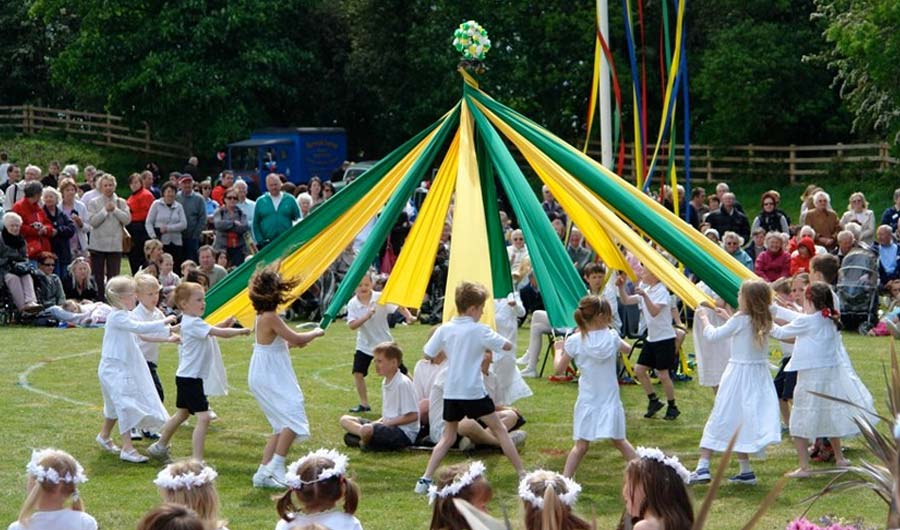 The Barwick-in-Elmet Maypole Trust via Wikipedia

(Inside Science) -- It's May Day, and for many people around the world that means it's time to break out the maypole. The tradition of erecting a large, decorated pole to celebrate spring dates back to pagan times in Europe, but the now-common practice of dancers braiding ribbon around the pole was likely popularized by John Ruskin, a Victorian art critic and philanthropist.

Ruskin thought the dances could bring beauty to an industrializing England. And indeed, many people find braids beautiful, including mathematicians, who have been studying the intricacies of braids for decades and are still finding new angles to explore.

"I study braids just because they're pretty," Nancy Scherich, a graduate student in math at the University of California, Santa Barbara, said in a video explaining some of the rudiments of braid theory. In 2017, she won an annual competition that challenges researchers to use dance to explain their work, with her submission, Representations of the Braid Groups. While Scherich employed aerial dancing to visualize the braids, math and motion also merge in maypole dances.

There are a few key ways in which a maypole braid differs from the ordinary braids that mathematicians study, said David Richeson, a mathematician at Dickinson College in Carlisle, Pennsylvania. In 2009, a May Day party inspired him to come up with a mathematical representation of the maypole dance he witnessed.

Ordinary braids are somewhat like a standard hair braid. They are made by taking a series of strands hanging down from a horizontal line and then crossing the strands in front or behind each other. The Austrian mathematician Emil Artin described braids like this in the 1920s using a mathematical concept called a group. In the case of braids, the groups are defined by the number of strands, so, for example, all the possible braids that can be made from three strands belong to the same group. The complicated braids in the group can then be thought of as being made up of a combination of the simpler braids.

Maypole braids are like Artin's braids except that they hang from a circle, rather than a straight line, and you can also twist the ribbons around the pole by having everyone dance in a circle at once, Richeson said.

So, what's the point of studying objects as groups? "As is often the case in math, if you have something you are thinking about, you would like to get rid of all the extraneous information and boil it down to its essence," Richeson said. "Turning this crazy thing like maypole braids into a group, it's like 'Oh, we know a lot about groups.' You can move it from unfamiliar territory into something we know pretty well."

That means you can start to figure out answers to questions such as "Can you get the same braids with different dances?" or "How many different braids can you get with a certain number of dancers?"

Richeson is currently advising an undergraduate math student who is trying to compute the fewest number of dance moves required to make a given maypole braid. "She has made headway. It's a tricky problem," Richeson said.

Group theory is a powerful, active area of math research that has been used to study everything from particle physics to the properties of crystals -- but it isn't the only lens through which to view maypole braids.

Cristine von Renesse, a mathematician at Westfield State University in Massachusetts, has used maypoles to teach nonmath majors about the beauty of math. Her students explored such questions as how to predict the geometric pattern of colors in a maypole braid and how to change the dance to get a different pattern, discovering their own tools and approaches to answering the questions in the process. "In my case we did more geometry and combinatorics, not group theory," von Renesse wrote in an email to Inside Science.

Von Renesse co-authored a paper about the class with one of her students, Julianna Campbell, which was published in April in the Journal of Mathematics and the Arts. "Math had always been a source of struggle, insecurity, and general annoyance for me," Campbell wrote in the paper. Yet the class transformed her perspective. "Mathematics, just like art and dance, can be used to enrich our lives," she wrote.