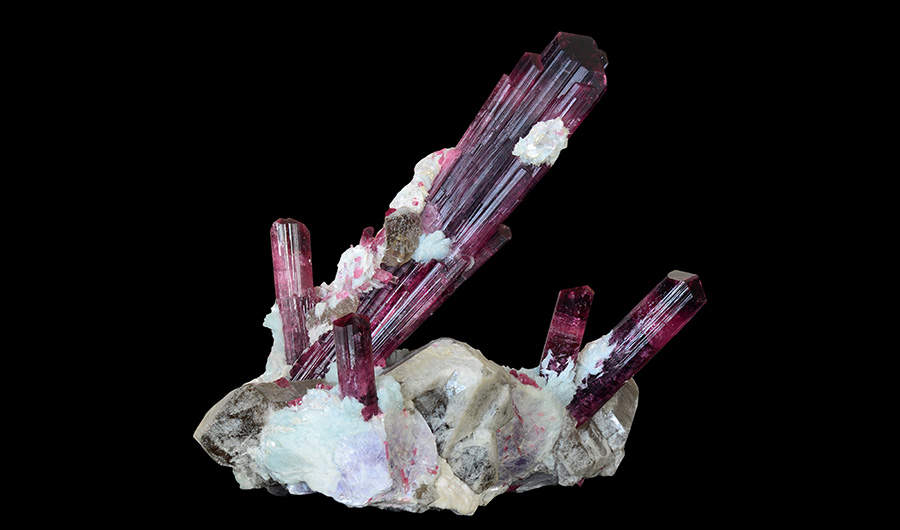 A red elbaite crystal from the Malkhan pegmatite field in Russia.

(Inside Science) -- When it comes to geologic events that happen fast, you might think of an earthquake or an erupting volcano. But crystal growth can also happen at a surprisingly rapid pace, according to new research.

"I have to admit, I never expected the rates to be as fast as they were," said Patrick Phelps, a doctoral student in geology at Rice University in Houston, Texas. Phelps co-authored a paper published this month in the journal Nature Communications showing that large crystals, more than a meter in length, could grow in a matter of days. The researchers calculated the growth rate from smaller crystals, but meter-long crystals have been found in similar types of rock.

The project began years ago when Phelps was considering doctoral programs. He fell into a conversation with geologist Cin-Ty Lee while visiting Rice University. Lee posed a question to the young student: Have you ever thought much about how fast crystals grow? You know, the really big ones like what you might see in the pages of National Geographic magazine?

Phelps dove headfirst into research on igneous rocks called pegmatites, which are formed underground by cooling magma and have interlocking crystals that are occasionally very large. He was able to get some samples from a mine in southern California.

He used cathodoluminescence, which essentially shoots electrons at the crystal. The electrons get absorbed by defects in the crystal lattice, releasing visible light as they decay. "It’s really cool to see the colors change," said Phelps. "You go from this clear quartz to this weird orange and purple thing -- those colors are caused by defects."

The colorful map of the crystal then guided the researchers on where to look for trace elements. They used another technique called laser ablation to understand the arrangement of the trace elements, which revealed the growth rate. One intriguing finding: The crystal doesn’t grow at the same rate everywhere. The middle seems to grow more slowly, and the researchers modeled an uptick at the edges, Phelps explained.

The current study focused on quartz crystals, which are abundant and important, but Phelps hopes to investigate other types of minerals in the future. For example, understanding crystal growth could help researchers predict where to look for lithium, a mineral that is vital to modern life due to its use in batteries.