Using a bouncy platform instead of a vibrating tip may allow MRI machines to image a single virus.
Image 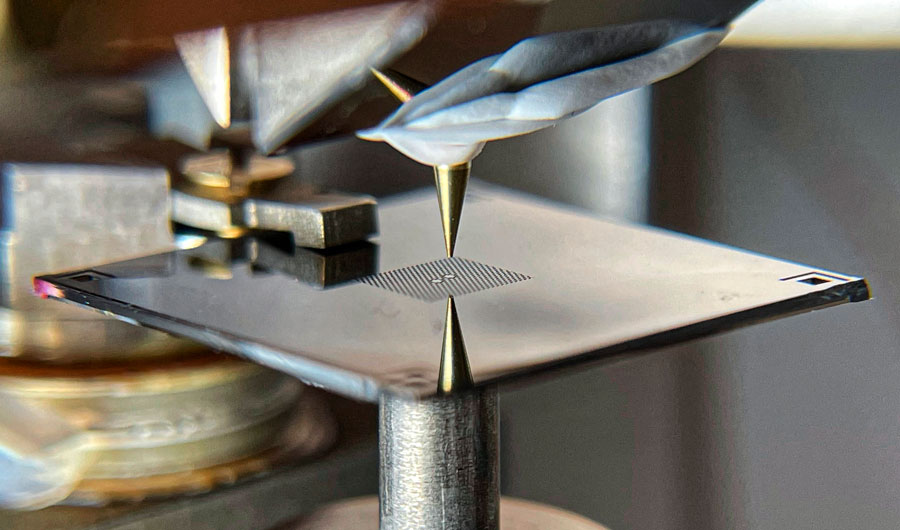 The prototype of the device viewed through a microscope.

(Inside Science) -- Magnetic resonance imaging, or MRI, is commonly used in hospitals for scanning the bodies of patients. Researchers from Switzerland sought to expand the technique for studying something much smaller -- down to a single virus with atomic resolution.

In research labs, however, scientists use MRI machines with slightly different designs to study things much smaller than the human body with much higher precision.

Current state-of-the-art systems can measure these forces down to as little as 5-10 attonewtons, or about the weight of a single strand of DNA. It is possible to make thinner and more sensitive cantilevers using materials such as carbon nanotubes. However, this would make the device more difficult to use because it would involve mounting the sample on nanometer-wide tubes each time.

The design from the group at ETH Zurich in Switzerland replaces the skinny cantilever with a bouncy "trampoline" made of a 40-nanometer-thick sheet of silicon nitride perforated with holes.

The researchers don't yet have the ability to apply and control a magnetic field and radio waves, which will be necessary before the device can function as an MRI machine. However, they have tested the main element in their design on gold nanoparticles and virus specimens. Using a laser in place of a magnetic field and radio waves to induce vibrations in the membrane, they measured the interactions between the atoms on the surface of the specimens with a probe and mapped out the shapes of the samples. The research was published this month in the journal Physical Review Applied.

The construction of the membrane will have to be improved, since it is currently only sensitive to 280 attonewtons, far from the 0.1 attonewton goal. This could be challenging, since alternative materials such as graphene might prove more difficult to manufacture, said Alexander Eichler, one of the researchers who conducted the study.

An MRI machine capable of imaging at the atomic level would have a wide range of applications. For example, it could drastically speed up the study of viruses, enabling virologists to see the structure of a novel virus in a matter of weeks instead of several months.