Researchers design and synthesize a material with very low thermal conductivity, which could be used to convert waste heat to electricity.
Image 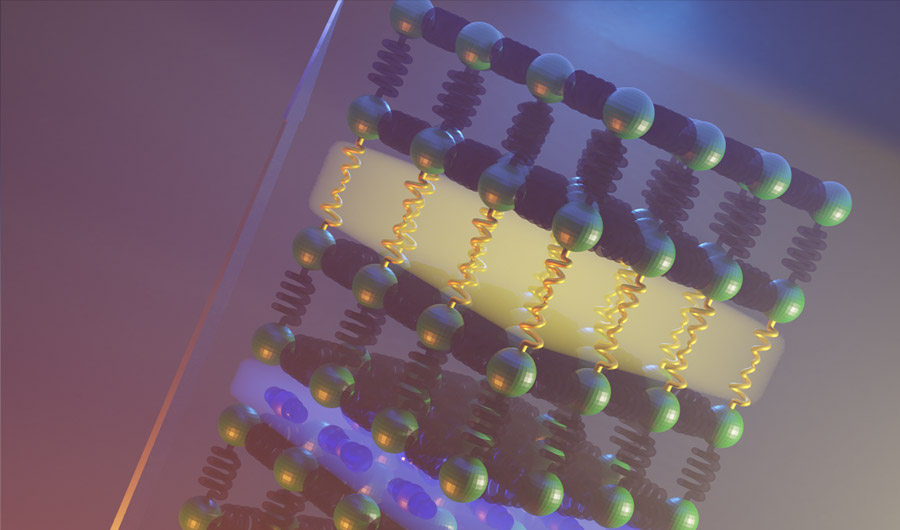 Researchers combined two different atomic arrangement (yellow and blue slabs) to slow down the motion of heat through a solid.

(Inside Science) -- A mind-boggling proportion of the world’s energy is lost as waste heat. Most gas-powered cars use less than 30% of the energy from fuel to move down the road. The vast majority of energy gets dissipated as heat, mostly due to inefficiencies while running the engine. About one-third of the energy consumed by industrial processes that occur at refineries, steel mills, and other sites is also squandered as lost heat.

One way to recover those losses is by converting the waste heat into electricity. Researchers from the United Kingdom and France have designed and created a new material that could provide a boost to such energy conversion technologies. The material combines two different arrangements of atoms that were each found to slow down heat as it moves through the structure of a solid. The study, published this week in the journal Science, produced a so-called bulk superlattice with extremely low thermal conductivity.

“[Thermal conductivity] represents how easily heat can travel through a material,” said study author Matt Rosseinsky, a chemist at the University of Liverpool. “Materials that have low thermal conductivity are essential for the harvesting of waste heat and its conversion into electricity.”

Rosseinsky and his colleagues began by trying to understand the mechanisms responsible for reduced heat transport in each component of the bulk superlattice -- namely, the chemical compounds BiOCl and Bi2O2Se. Combining them into a single material required careful selection of how the layers would interact with one another to build up a crystal that slowed down the heat even more.

Once successfully synthesized, the final material, known to chemists as Bi4O4SeCl2, achieved a thermal conductivity lower than other materials of its kind. The intuitive design of the bulk superlattice led to a performance that exceeded that of its individual components..

More work is required to tweak its electronic properties to create a thermoelectric material for energy conversion technologies, but the strategy of combining atomic arrangements could be extended to improve other physical properties, such as superconductivity for better electricity transmission or magnetism for information storage with minimal energy cost.

“There are potential industrial applications across sectors once we have optimized the material,” said study author Jonathan Alaria, a physicist at the University of Liverpool. “This is because materials with such low thermal conductivity are critical for the development of new energy-related technologies that can convert waste heat to power.”