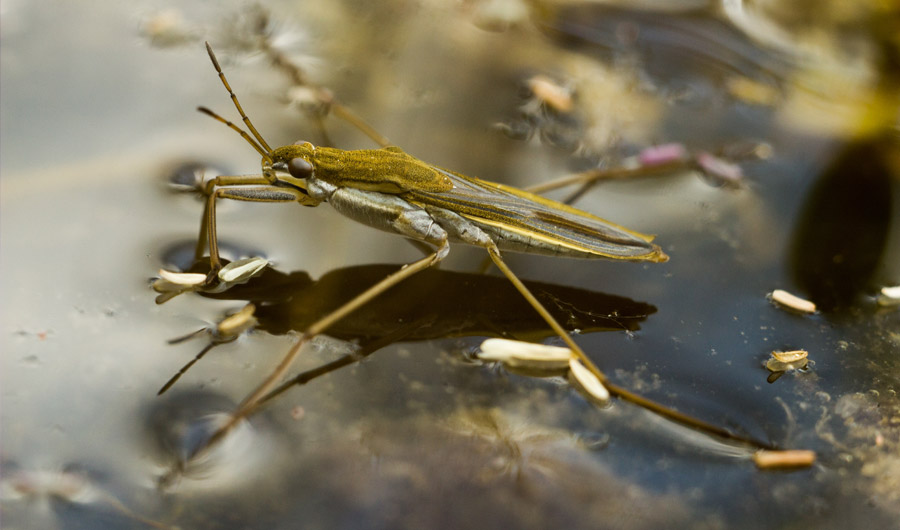 (Inside Science) -- The dangers of freshwater oil spills to fish and birds are well known, but what about the other creatures, like insects, that live in or on rivers and lakes? Tyler Black, a Ph.D. student in environmental sciences at the University of Guelph in Canada, was inspired to look at this question when he noticed something odd during oil spill experiments  at the Experimental Lakes Area in northern Ontario.

For the experiments, researchers created giant test tubes: 10-meter-wide floating rings with plastic walls that go down to the bottom of one of the lakes. Inside those tubes, they added different amounts of the diluted bitumen oil product that flows from Canada’s oil sands through pipelines like Keystone to see how it affected the ecosystem. Black noticed that within the enclosures that had oil, there were no aquatic insects like water striders on the surface of the water, while outside the enclosures and in the enclosure without oil, there were so many that the ripples from their movements looked like rain.

Water striders and other surface-dwelling insects rely on the surface tension of the water to stay afloat. Oil reduces surface tension, and Black suspected that was what was causing problems for the bugs. He set out to determine how much oil was needed to affect them. "It turned out to be a really small amount, just a few drops in a kiddy pool," he said. "Scaled up to the size of a typical boreal lake, that’s just a few liters of oil."

That small amount of oil was enough to kill half of the striders in his experimental tank within 48 hours . And that effect would likely have been seen in almost all freshwater oil spills in Canada and the U.S. over the past 12 years. "The amount of oil spilled in 99% of spills would be enough to affect insects," said Black.

Black also tested how remediation methods like the use of surface washing agents might change the outcome. Agents like Corexit EC9580A are used in marine spills to wash the oil off of the shoreline and into the water where it can be cleaned up with booms and skimmers. Black hypothesized that adding the surface washing agents might mitigate the oil’s effects on the insects. But he turned out to be very wrong. "In any tank that got the surface washing agent, all the striders died within minutes," he said. The same deadly effect was seen whether oil was present or not, and it occurred with vanishingly small amounts of the agent.

Black said most toxicity tests -- on oil and the chemicals used to clean up spills -- tend to look only at the chemical toxicity, not the physical effects, leaving a gap in our understanding of how organisms and the wider ecosystem are affected. "There’s still a lot we don’t know about spills and the methods we use to clean them up," he said. "We’re missing this entire exposure pathway."

Jeff Wesner, who studies freshwater ecosystems at the University of South Dakota, said the loss of water striders and other surface-dwelling insects from streams and lakes could have serious effects on ecosystems. The bugs are an important food source for fish and birds, and a source of important fatty acids that their predators might not be able to find elsewhere. But whether those effects will continue long-term is difficult to say. A lot will depend on how long the oil and surface washing agents are present in the ecosystem, and how quickly the insect population can rebound when they are gone.

Wesner said the work also suggests new avenues for his own research on insects that must pass through the surface of the water to complete their lifecycle. "Would the change in surface tension affect the ability of bugs to get out of the water? It’s not something I’d thought about," he said. "There could be a lot of potential ecosystem consequences."