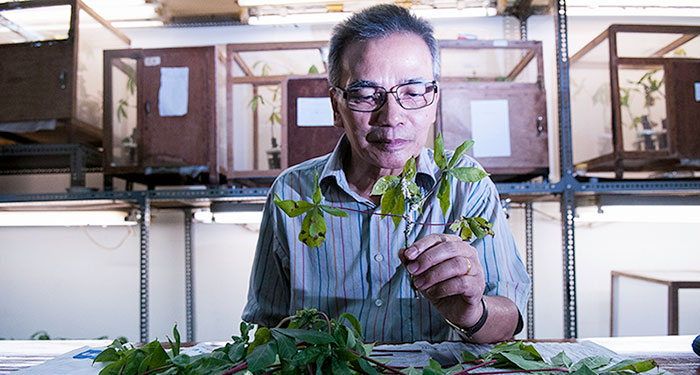 Researchers in Indonesia are releasing the parasitic wasp Anagyrus lopezi in an attempt to save cassava crops from destructive mealybugs.

(Inside Science) -- Scientists today released 2,000 South American parasitic wasps in Indonesia as part of a project aimed at thwarting an invasive insect pest that is devastating the country’s cassava food crop.

The wasps were released into a small, confined field, enabling scientists to assess their performance under local environmental conditions.

"Today’s release constitutes the start of what could eventually become a nationwide release campaign," said Kris Wyckhuys, an entomologist at the International Center for Tropical Agriculture, a Colombia-based nonprofit that is helping organize the release. The technique has been used, with success, to protect cassava in other countries.

"Once the wasps have completed a couple of generations in the field cages and perform well, the cages could be opened and a full field release can be initiated," Wyckhuys said.

The use of the parasitic wasps to control cassava mealybugs is a textbook case of classical biological control, in which the natural enemies of a pest are imported from its native country to slow its spread. Edwin Rajotte, an entomologist at Pennsylvania State University in University Park, said that while there are famous situations where classical biological control has not gone according to plan -- the introduction of cane toads in Australia is one -- the technique's benefits outweigh its risks.

"A natural enemy has evolved with the pest in its home range, so it is adapted to efficiently seek and parasitize the pest. And they are usually able to move with the pest population as it invades new areas," said Rajotte, who is not involved in the Indonesia project. "Pests are also not likely to develop resistance to a natural enemy."

Cassava, also called manioc and yuca, is a bush-like plant that is originally from South America. Its tubers and leaves are now a major food source in many parts of the world, especially Africa and Southeast Asia.

Indonesia is a major cassava producer, and plants roughly one million hectares of the crop every year. In recent years, however, a pill-shaped insect known as the cassava pink mealybug has been ravaging the country's crops. Also from South America, the mealybug is one of the most destructive cassava pests in the world, capable of reducing cassava yields by up to 84 percent. It kills cassava plants by sucking on their sap, depriving them of vital nutrients and water.

Chemical insecticides have proven ineffective against the mealybug because its body is covered in a protective wax coating. So to slow the mealybug’s spread in Asia, scientists have recruited a natural enemy from its homeland, the tiny Anagyrus lopezi wasp.

"Cassava is originally from South America, so it makes sense that the crop's pests come from there too," Wyckhuys said.

About two millimeters long, the parasitic wasp lays its eggs inside the mealybug’s body. When the larvae hatch, they eat their way out of the mealybugs, slowly mummifying and killing them. Scientists estimate that a single female wasp can kill up to 200 mealybugs during the two to three weeks that it lives.

The A. lopezi wasp was first exported to fight mealybug infestations in sub-Saharan Africa in the 1980s, with spectacular results. Scientists estimate the wasps saved about U.S. $20 billion in damages to the cassava industry there.

Since then, however, the mealybug has spread to many parts of Southeast Asia, probably by hitchhiking on infected cassava as it was transported across countries and continents.

"Farmers, traders and middlemen often source planting material from one cassava-growing area to another, and more often than not, they do so without given proper care and attention to mealybug-infestation," Wyckhuys said.

The Indonesia experiment will mark the second time the wasp has been purposely recruited to fight the mealybugs in Southeast Asia. In 2010, more than a quarter-million wasps were released in Thailand, where they have done a "relatively good job" fighting the mealybug infestation there, Wychkuys said. He noted that occasional outbreaks are reported in large cassava plantations.

Rangaswamy Muniappan, director of the Integrated Pest Management Innovation Lab at Virginia Tech in Blacksburg, which is a key partner in the Indonesia release operation, stressed that before being released, the wasps were kept in quarantine to ensure that they fed only on cassava mealybugs and posed no threat to humans, animals or other insects.

"That has been proven, and the Indonesian government has given permission for this field release," Muniappan said.

Scientists say that once a full deployment is begun, it should take about a year and a half for the wasps to reduce the mealybug population down to about 15 percent of its current level.

"At that point, they will no longer be of concern," Muniappan said, "because they won’t be causing much economic damage."