The animals' bodies contained pollutants not found in dolphins before.
Image 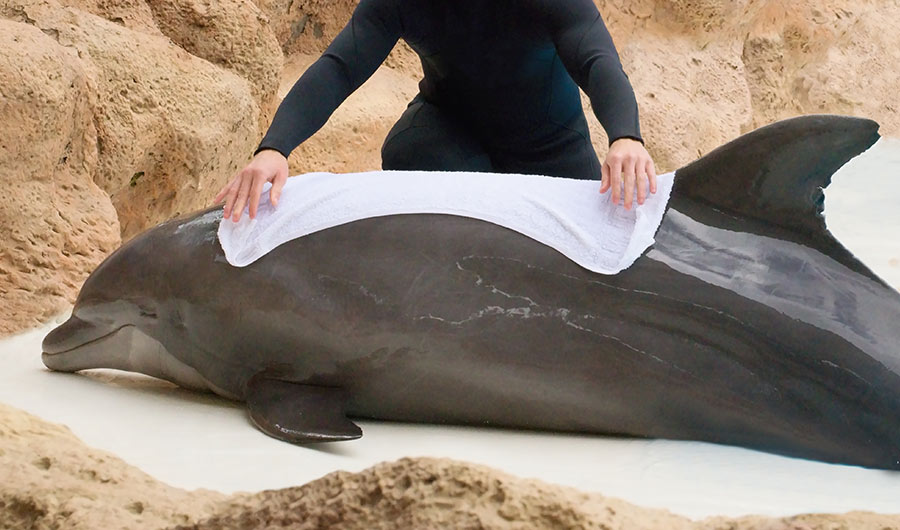 (Inside Science) -- Florida scientists have found toxic human-made pollutants in the blubber of stranded whales and dolphins, adding to a library of data that measures how human activity contaminates ocean wildlife.

The researchers did not link the pollutants to the strandings -- they weren’t looking for that -- but documented the toxic chemicals in higher amounts and in more species than had been found before. The scientists can use the data to find where humans are dumping toxins into the water supply to see if the effects can be mitigated, they said.

About 500 dolphins and whales beach themselves around the world each year. No one knows why, although theories abound.

“Sometimes it’s easy to tell -- for example, if they have had a human interaction, things like entanglements or swallowing a plastic bag,” said Annie Page-Karjian, a veterinarian and assistant research professor at Florida Atlantic University’s Harbor Branch Oceanographic Institute and lead scientist of the study. Some are dead of gunshots. Most of the animals used in research are dead when found; some are euthanized.

For the study, Page-Karjian and her colleagues performed necropsies on 83 dolphins and whales that were stranded on the beaches of Florida and North Carolina between 2012 and 2018. The animals were mostly bottlenose dolphins, although 10 other species were also represented. The researchers tested for 17 substances and found several that had not been reported in dolphins before.

They found, for instance, atrazine, an herbicide; DEP, a chemical found in plastics; NPE, a chemical used in food packaging; and antibacterial and antifungal agents. Earlier studies have found flame-retardant chemicals, persistent organic pollutants (POPs), PCBs and even DDT.

The researchers also tested for elements like arsenic, cadmium, lead, mercury, thallium, cobalt, copper, manganese, iron, selenium and zinc. They found high concentrations of some of these elements in the bottlenose, but lower amounts in pygmy sperm whales. More research would be needed to determine whether these substances affect the animals' health.

The amounts of pollutants varied between species and where the animals were beached. Animals found in Florida had higher levels of pollutants than those stranded in North Carolina.

The researchers also found toxic substances in a rare white-beaked dolphin and an even rarer Gervais’ beaked whale. The toxins had not been previously reported in these species, as virtually no data exists on them. The study was published last month in Frontiers in Marine Science.

Most of the substances found in the animals came from lower in the food chain, said Page-Karjian. Industrial processes and other sources of pollution put the chemicals in the water, the chemicals make their way into fish, and the fish are then eaten by marine mammals.

The Harbor Branch Oceanographic Institute is part of the Southeast regional office of the National Oceanic and Atmospheric Administration's Marine Mammal Stranding Network, which rescues beached mammals in that part of Florida. The rescue organizations go to the sites of strandings hoping to save the living and collect the dead for research. The Fort Pierce institute handles eight to 12 strandings a year.

Every mile of the American coast is monitored by members of a regional stranding group. Harbor Branch is responsible for 72 miles of Atlantic coastline.

“The more information we can get on the impacts of those chemicals, the more likely it is people can do something about it,” said Randall Wells, director of the Sarasota Dolphin Research Project at the University of Chicago’s Mote Marine Laboratory in Sarasota, who was not involved in this study.

Wells does similar work with the living dolphins that make Sarasota Bay their home. He and his colleagues use air guns to shoot darts into the skins of swimming dolphins to extract a tiny piece of blubber, about the size of a fingertip. From that sample the researchers can surmise a whole raft of data, including contaminants, genetic information, diet, reproductive hormones and stress hormones. In some cases, they capture the animals and do veterinary examinations before releasing them back into the water.

Wells spoke highly of the new study. It's important to make the most of opportunities to study dead dolphins and whales, he said, given the difficulty of studying such animals while they're alive. Wells said research like this can illuminate trends that help people manage the animals, and it may also reveal information about the sources of the contamination.

All the toxins are, of course, released by people.

“Humans continue to make chemicals and continue to put chemicals in the water, regardless of what the EPA tells you,” Wells said.