New research links cloud top appearance to the unusual phenomenon of lightning during a snowstorm.
Image 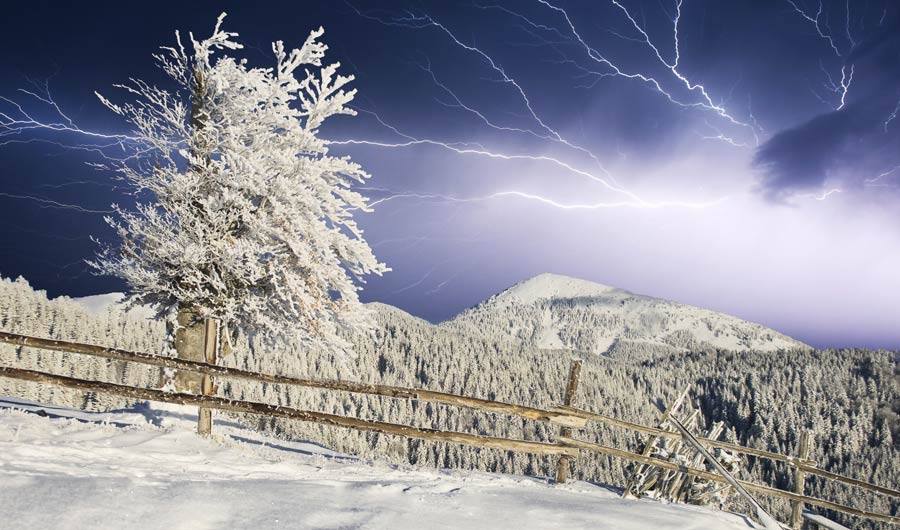 (Inside Science) -- On Valentine’s weekend in 2015, winter storm Neptune pummeled Boston. Weather Channel meteorologist Jim Cantore was outside reporting on the blizzard when a sudden purple flash illuminated the sky. “Oh yes! We got it baby!” he yelled, repeatedly leaping in the air. The “it” was thundersnow -- the relatively rare, sometimes unnerving, sometimes thrilling, appearance of lightning and thunder during a snowstorm.

The scarcity of thundersnow events, while likely compounding the delight of weather lovers who experience them, has also meant that scientists don’t understand thundersnow as well as traditional summertime thunderstorms. Research has been limited by small or biased datasets, as well as less pressure to forecast thundersnow.

But now researchers have a new tool at their disposal: A recently launched satellite instrument, called the Geostationary Lightning Mapper, or GLM, can gather images of lightning flashes day and night, summer and winter, over nearly an entire hemisphere. And scientists are tapping into this wealth of new data to unlock more of thundersnow’s secrets.

A summer thunderstorm usually develops when hot humid air near the Earth’s surface rises and condenses into towering thunderclouds. Within the cloud, water condenses and freezes into small particles that swirl around, colliding and separating opposite electrical charges. Negative charges build up in one part of the cloud, and then -- zap -- leap to a positively charged part of the cloud or the ground as a bolt of lightning.

The rising air and swirling ice particles are features of thundersnow too, but it’s harder for these conditions to develop in winter, when the ground is colder. The updrafts associated with thundersnow are generally weaker and, except in the case of lake-effect snow, don’t usually start from the ground. Most often, it takes the electrical charges longer to build up in the clouds and the bolts of lightning are more spread out in time.

Sebastian Harkema, an atmospheric science student at the University of Alabama in Huntsville, worked with scientists at NASA Marshall Space Flight Center to examine GLM data from 2018 to 2020 and identify tens of thousands of instances of thundersnow over the contiguous United States. In comparison, there were likely more than a million regular thunderstorm lightning flashes during this same time. The researchers found that thundersnow flashes on average were larger and longer-lasting than average rainfall-associated lightning. They also found that thundersnow happens more often in storms that dump a lot of snow, but that the areas within the storm that are experiencing thundersnow are at the time spatially separated from the areas with the highest snowfall rates.

In new research that is not yet published, Harkema and his mentors linked the changing appearance of cloud tops in satellite images over the course of two hours to the ultimate initiation of a thundersnow flash. They found that the cloud tops undergo a similar, but less pronounced, change in appearance as cloud tops before lightning appears during a regular thunderstorm. The change in the satellite images can be linked to the physical changes in the cloud when the top becomes icy and then the ice particles grow smaller over time, likely because they are colliding and breaking apart. Harkema presented the research at the virtual meeting of the American Meteorological Society last week.

Thundersnow is generally less of a direct danger to people than thunderstorm lightning, both because it’s rarer and it happens during cold weather that tends to drive people inside. But the studies by Harkema and others that have found relationships between thundersnow and heavy snowfall indicate a better understanding of thundersnow could also help researchers better forecast snowfall rates and totals. This in turn could mean the public gets a more accurate warning of adverse winter weather with more time to prepare.

“There’s a pure science aspect to this work, about understanding the microphysics inside a cloud, but there is also the applied aspect of improving the forecast. It’s ringing all the bells,” said Patrick Market, a meteorologist at the University of Missouri in Columbia who has studied thundersnow but was not involved in the new research.

“The Geostationary Lightning Mapper is an excellent tool to be able to really capture all the lightning that happens in these more rare scenarios like thundersnow,” said Eric Bruning, a meteorologist at Texas Tech University. “It’s always valuable to have these studies that are taking a look at these less studied parts of the atmosphere.”

Harkema said he continues to be excited by the relatively uncharted territories of his work. Although some colleagues joke that he may be gunning for the title of “Dr. Thundersnow,” he has yet to witness the weather phenomenon in real life. “That’s something that is definitely on my bucket list,” he said.