Up to 63% of African and Arabian mammal species may have vanished in a previously undetected die-off.
Image 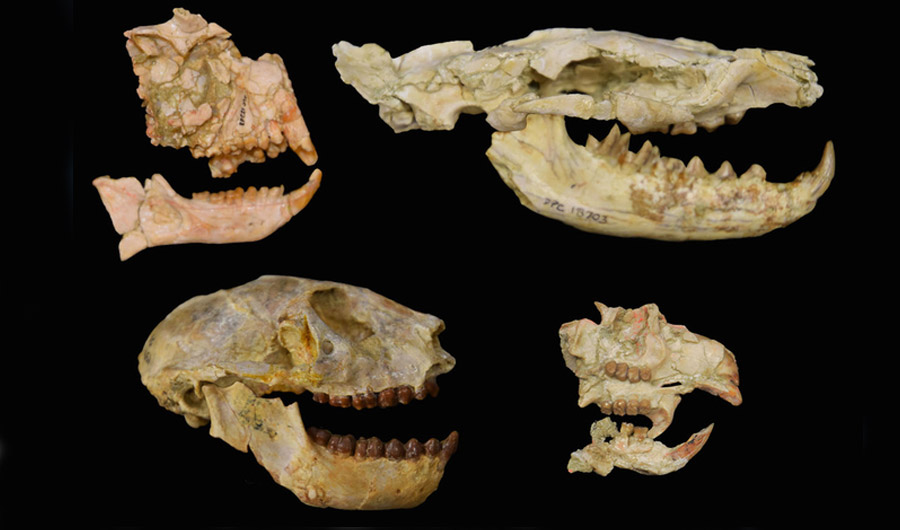 Fossils of key groups used to find evidence of a previously undetected mass extinction. Primates are on the left, the carnivorous hyaenodont, upper right, rodent, lower right. The fossils are from the Fayum Depression in Egypt.

(Inside Science) -- Nearly two-thirds of mammal species in Africa and the Arabian Peninsula may have died off about 30 million years ago, a mass extinction that escaped detection for decades until now, a new study finds.

During a time span known as the Eocene-Oligocene transition between 40 million and 34 million years ago, Earth's climate shifted dramatically, with the planet growing cooler, ice sheets expanding and sea levels dropping worldwide. During the Eocene, Antarctica was covered by lush forests, but afterward it became the icy continent seen today.

Nearly two-thirds of the mammal species known in Europe and Asia at that time went extinct. Still, scientists previously thought African and Arabian mammals may have escaped this fate -- the area's mild climate and proximity to the equator could have served as a buffer from the worst of the cooling trend.

Now researchers find evidence that despite their relatively balmy environment, up to 63% of Africa and the Arabian Peninsula's mammal species may have vanished during this time. They detailed their findings online Oct. 7 in the journal Communications Biology.

The scientists analyzed fossils of five mammal groups: a group of extinct carnivores known as hyaenodonts; two rodent groups, the anomalures, or scaly-tail squirrels, and the hystricognaths, a group that includes porcupines and naked mole rats; and two primate groups, the strepsirrhines, or lemurs and lorises, and the anthropoids, the ancestors of monkeys, apes and humans.

After gathering data on hundreds of fossils from multiple sites in Africa and the Arabian Peninsula, the researchers built evolutionary trees for these mammal groups, pinpointing the first and last known appearances of each species and when new lineages diverged from their relatives. They found all five groups apparently suffered huge losses around the Eocene-Oligocene boundary.

"I was really surprised to find that the same pattern of extinction emerged in each of the five different groups we had trees for, each of which had independent origins in Africa," said study senior author Erik Seiffert, an evolutionary biologist at the University of Southern California.

After a few million years, these groups become diverse again in the fossil record. However, the species that appeared later in the Oligocene evolved from the survivors of the mass extinction. This was evident in the animals' molars -- the rodents and primates that appeared after the shift had different molars than their predecessors and so were new species that ate different food and had different habitats.

"The mammalian record before the extinction, during, and after, appear at first glance to be rather similar in levels of diversity," said study lead author Dorien de Vries, a paleontologist at the University of Salford in England. "However, when you study the relationships of these fossil species, it becomes clear that the diverse groups after the extinction are not a continuation of the groups present before and during the extinction. They are in fact diversified groups of mammals that are only related to a small subsample of the pre-extinction groups."

Previous research might have missed this mass extinction by focusing on sudden die-offs that could be tied directly to a major climate shift right at the Eocene-Oligocene boundary, Seiffert said. In contrast, this gradual mass extinction may have been due to environmental degradation and habitat loss over the course of 4 million years due to climate and other shifts, "so we needed to really zoom out and take a broader view to appreciate the pattern," he noted.

When it came to the anthropoids, diversity virtually disappeared about 30 million years ago, leaving them with a single type of tooth, impacting what they could later evolve to eat. "For us, this extinction event represents a real reset button and shift in our dental adaptations," de Vries said.

This mass extinction may have had its roots in a series of major geological events in Africa and the Arabian Peninsula during that time. These included volcanic super-eruptions in Ethiopia, as well as so-called flood basalts, deluges of molten rock roughly 900,000 cubic kilometers in volume and up to 3 kilometers thick in some areas. The Arabian Peninsula also separated from East Africa during that period, opening the Red Sea and the Gulf of Aden.

"I think many of us already believed this pattern would exist, but the data here show the pattern quantitatively," said paleontologist Chris Beard at the University of Kansas, who did not take part in this research.

"Importantly, this result could be viewed as counterintuitive, especially for arboreal primates and rodents," Beard noted. This is because the cooler and drier conditions of the early Oligocene may have led to more forest patches separated by open terrain, conditions producing barriers to gene flow between animal populations that might actually have supported the evolution of more species in these groups. "So, either the assumption of increasingly patchy conditions across the Eocene-Oligocene boundary is wrong, or the macroevolutionary response to it was different than expected."

The researchers now plan to investigate all the mammal groups present in Africa and the Arabian Peninsula during the Eocene and Oligocene the same way. "This work will reveal whether the pattern holds across all of these mammalian lineages, or if some actually diversified during the early Oligocene," Seiffert said. However, drawing these evolutionary trees "is very time-intensive and can take many years, so the results will not be available for quite a while," he said.