Even some of the most powerful explosions in the universe might be explained by the collision of magnetic fields.
Image 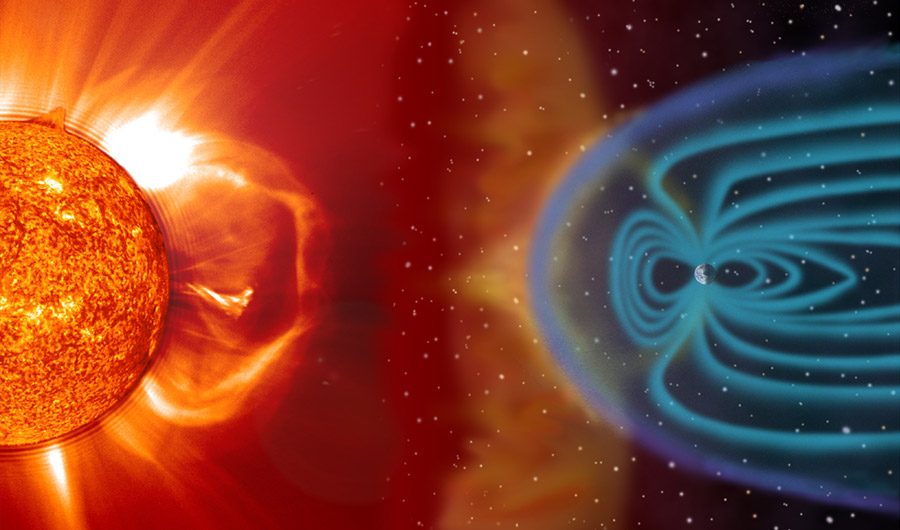 (Inside Science) -- When magnetic fields clash, they can rapidly unleash powerful explosions. Now scientists may have solved the decades-old mystery behind how these outbursts can happen so quickly. The findings could one day help explain the origins of the most powerful explosions in the universe and point to ways to build stable nuclear fusion reactors.

Plasmas, the clouds of electrically charged particles that make up stars and most of the ordinary matter in the known universe, naturally have magnetic fields embedded within them. When magnetic fields collide -- for instance, when a gust of solar plasma slams into the shell of electrically charged particles surrounding Earth, known as its magnetosphere -- magnetic field lines can break and reconnect, which can explosively convert magnetic energy into heat and kinetic energy.

Gamma-ray bursts, the most powerful explosions in the universe, may derive their energy from reconnection taking place within plasma falling into black holes. Reconnection can also have major impacts on Earth -- for example, it can drive outbursts such as solar flares, which in turn can trigger geomagnetic storms on Earth, one of which blacked out the entire Canadian province of Quebec in 1989.

In addition, reconnection can hinder nuclear fusion experiments that aim to recreate the power that drives the sun. These experiments often attempt to use magnetic fields to confine and heat plasmas to the point where atomic nuclei fuse and give off energy, but reconnection can trigger crashes that keep plasmas below fusion temperatures.

Reconnection takes place in plasmas within thin layers where electric current is strongly concentrated. The most popular model for reconnection, developed in the 1950s, suggested these "current sheets" tightly limit the speed at which magnetic field lines can snap and reconnect, making fast reconnection impossible. However, observations of solar explosions in the 1950s and many other findings since then directly contradicted these theoretical predictions by showing that fast reconnection happens often.

In 2016, physicist Luca Comisso, now at Columbia University in New York, and his colleagues revealed a model they suggested might solve the puzzle behind the onset of fast reconnection. They suggested the culprit behind this mystery was an effect called "plasmoid instability," which breaks up current sheets in plasma into small magnetic blobs called plasmoids.

A key factor behind this new breakthrough was inspiration from the 17th-century "principle of least time" devised by French mathematician Pierre de Fermat, which suggests that light takes the shortest path to get from one point to another. This helped reveal which instabilities can emerge and grow to disrupt current sheets, "starting the fast magnetic reconnection process," Comisso said.

This model helped describe how plasmoids can grow and multiply over time. However, the work initially did not account for the viscosities of plasmas, and so best described plasmas with relatively low viscosities, such as solar plasmas.

Now the research team has added viscosity to its model, helping it better describe more viscous plasmas, such as those in fusion reactors, in the disks whirling around black holes and neutron stars, or in the clouds between stars and galaxies, Comisso said. "Now the formulas are more complete because they can describe a larger range of astrophysical systems," he said.

All in all, "plasma viscosity slows down the speed of the plasmoid instability," Comisso said. "If we apply formulas that neglect plasma viscosity in a system with large plasma viscosity, we end up with wrong predictions." The scientists detailed their latest findings online Nov. 28 in the Astrophysical Journal.

"Now we should be able to make more accurate predictions on when fast reconnection will occur," Comisso said. If the model proves true, it could help scientists better predict when solar flares will happen, based on analysis of solar magnetic fields, he said. The new advances could also help researchers design fusion reactors where plasma is magnetically confined in more stable ways, he added.

Research centers such as the upcoming Facility for Laboratory Reconnection Experiments, or FLARE, "will give us a chance to test this model," said plasma astrophysicist Nick Murphy at the Harvard-Smithsonian Center for Astrophysics in Cambridge, Massachusetts, who did not take part in this work. FLARE will be located at Princeton University and is the biggest project to study reconnection on Earth. "We can put probes in plasmas, see how their magnetic fields evolve and how much energy is released, and test the model's predictions on how quickly plasmoid instability develops," Murphy said.

Comisso said future research will also explore so-called collisionless plasmas -- ones where there are so few interactions between the particles making up the plasma that any collisions between them have no significant effect on the overall behavior of the plasma. Such plasmas "are typical of planetary magnetospheres," Comisso said.