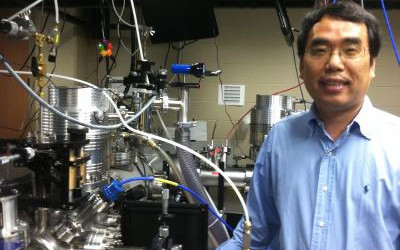 A photo of Dr. Chang, who accomplished his work at the Florida Atto Science &Technology (FAST) lab.

(ISNS) -- American researchers have generated a record-setting laser pulse so short that it makes most everything else seem like an eternity. The pulse lasted just 67 attoseconds, which is about two million billion times faster than the blink of an eye. The previous record, set by European researchers in 2008, was about 20 percent slower.

The new record holders say the technique they used can yield even briefer bursts, down to 25 attoseconds, potentially helping physicists see the very motion of electrons around atoms. An attosecond is a billionth of a billionth of a second.
“Our pulse only travels about 20 nanometers in those 67 attoseconds,” said physicist Zenghu Chang of the University of Central Florida, whose team created the pulse. “Light is almost frozen for this short a pulse.”
The pulse started its journey as a spread-out wave of near-infrared light similar to that used by television remote controls. The light was made by a special laser created when the electrons of a sapphire crystal embedded with titanium atoms are energized into producing light.
The laser’s light was focused through a special optical system called a double optical grating, which compressed the light’s components into a tiny pulse a record-setting 67 attoseconds in duration. As the light was compressed, it changed from being a longer pulse of low-energy infrared light, which is below the red part of the visible spectrum, to a shorter burst of higher-energy, extreme ultraviolet light well above the blues and purples our eyes can see. According to Chang, the entire setup is like an ultra-fast light switch.
“When you flip on and off a light switch, you’re creating a light pulse from the light bulb,” said Chang. “To produce an attosecond pulse, you have the same on-off light switch, but on a much, much faster time scale.”
Dave Kielpinski, director of Australia’s Attosecond Science Facility, says the double optical grating technique will be attractive to researchers around the world vying for more petite pulses.
“It’s not known what the best method of creating these pulses will be,” said Kielpinski. “But [the] double optical grating is a nice one that a lot of people will be investigating because it works well and is relatively straightforward in terms of setup.”
But creating a new technique to generate record-breaking short pulses wasn’t the only challenge Chang’s team faced. The pulses the team could eventually create using double optical grating would be too quick to be measured by any existing camera, so the team had to design a new one.
“Previously it wasn’t even clear how one would be able to measure such [short] pulses,” said Chang. “To measure something fast, you need something even faster. It took many years of effort to create our new camera."
The team measured their pulse using both their new camera and an older method called FROG-CRAB --it’s a tradition in the ultrafast laser community to use animal acronyms. The 67 attosecond pulse – the fastest pulse the older camera could see – would test whether the new camera’s measurements were valid. When the results came back the same with both cameras, the value of the new technique was proven.
Since the first attosecond light pulses were created in 2001, the “next step” has been to create shorter and shorter pulses to peek at the movements of electrons. To get there, scientists still must greatly reduce the duration of laser pulses.
“None of the electron motion we care about for chemistry or material science lasts longer than a few attoseconds,” said Kielpinski.
Our current understanding of electricity is reduced to the average movement of electrons in a material. According to Chang, in order to design next-generation electronics, understanding how each electron behaves individually is key.
“Eventually with attosecond pulses, our hope is to understand electronics better to build next-generation computer chips that can run much faster,” said Chang.
For chemists, electrons are the glue that connects the atoms in a molecule together. A better grasp of the motions of electrons, says Kielpinski, may help biochemists working to block potentially harmful atomic pairings from taking place in cells.
Kielpinski is quick to admit that applications of attosecond physics are still years away. The current research, he says, is aimed at creating the techniques that can produce the needed ultrashort pulses of light.
“It’s a process of making the tools that will enable people to perform these more application-driven tasks in the future,” said Kielpinski. “The hope is that in 10 or 20 years this will be a tool people can use to investigate things without having to think about it too hard.”
Chang's results were recently published in the journal Optics Letters.
Thomas Sumner is a science writer based in Santa Cruz, Calif.
Filed under
Physics