Data from the second probe to reach interstellar space helps scientists form a more complete picture of the boundary between the sun and the stars.
Image 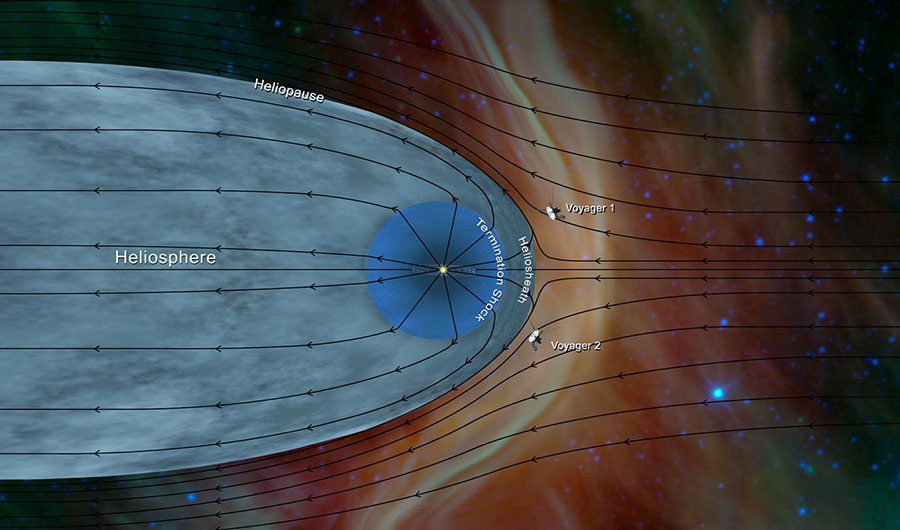 (Inside Science) -- The Voyager 2 probe has now joined its twin in reaching interstellar space, and has granted scientists the first direct look at the giant bubble that was formed by the sun’s winds colliding with wind from other stars.

The U.S. launched two Voyager spacecraft in 1977. Although Voyager 1 was launched 16 days after its twin, in 2012 it became the first of the two to reach interstellar space. Unexpectedly, Voyager 1 discovered that the supersonic wind of superheated ionized plasma that blows continuously from the sun does not gradually dissipate over distance -- instead, there is a sharp boundary now known as the heliopause that marks the boundary of what is known as the sun's heliosphere. This is where the solar wind meets "interstellar winds from supernovae that exploded millions of years ago," said Edward Stone, an astrophysicist at the California Institute of Technology in Pasadena.

Voyager 1's plasma instrument stopped working after its encounter with Saturn in 1980. This meant that it could not directly analyze the plasma at the boundary. Now scientists report Voyager 2 reached interstellar space Nov. 5, 2018. Moreover, its working instruments were able to give scientists their first direct glimpse of the plasma at and near the interstellar boundary.

Voyager 2 exited the southern hemisphere of the heliosphere at a distance of 119.7 astronomical units, or AU (the average distance between Earth and the sun), whereas Voyager 2 left the heliosphere's northern hemisphere at a distance of 122.6 AU. This suggests the heliosphere is roughly symmetrical, shaped like the spherical head of a blunt bullet where it flies toward interstellar space, at least at the points where the Voyager spacecraft crossed into interstellar space, said Donald Gurnett, an astrophysicist at the University of Iowa in Iowa City.

The fact that both Voyager spacecraft entered interstellar space at roughly the same distance from the sun is somewhat puzzling, because Voyager 1 made its crossing when solar activity was at a minimum, whereas Voyager 2 crossed during a solar maximum. Current models of the heliosphere suggested greater differences, said Stamatios Krimigis, an astrophysicist at Johns Hopkins University in Baltimore.

At a distance of 1.5 AU before the heliopause, Voyager 2 discovered that solar plasma slowed, heated up and was twice as dense as the plasma typically seen in the outer regions of the heliosphere. Immediately outside the heliopause, the interstellar plasma experienced variable currents and was hotter than expected, with a temperature of about 30,000 to 50,000 degrees Celsius instead of the predicted roughly 15,000 to 30,000 degrees C. The behavior Voyager 2 saw of both the solar and interstellar plasmas near the heliopause may result from how these winds get compressed more than expected when they collide, said John Richardson, an astrophysicist at the Massachusetts Institute of Technology.

Both Voyager spacecraft found the heliopause is relatively thin, taking a few hours to cross. Both also found the heliopause only lets in about 30% of the high-energy cosmic rays that blast the solar system from the rest of the galaxy, "which has had implications for the mutation rate of living things on Earth," Gurnett said.

The two Voyager spacecraft detected different structures. For example, Voyager 1 found there was a "stagnation region" where the solar wind slowed to zero before reaching the heliopause, whereas Voyager 2 did not. On the other hand, Voyager 2 discovered the solar bubble can be leaky, with solar plasma flowing about 100 million miles past the heliopause, whereas Voyager 1 detected hardly any material leaking out, Krimigis said. Moreover, Voyager 2 detected a "magnetic boundary" just inside the heliopause with powerful magnetic fields. The researchers suggested that some of these differences were potentially due to changes in the sun's level of activity, whereas others might be related to the different trajectories of the spacecraft.

The researchers estimated the pair of Voyager spacecraft may each be able to analyze interstellar space for about five more years before they run out of power. NASA is now considering new probes designed specifically to explore interstellar space, "moving out much faster than the Voyagers have," Krimigis said.

The scientists detailed their findings in five studies appearing online Nov. 4 in the journal Nature Astronomy.