Six decades ago, the Soviets launched a cosmonaut into orbit, shaking up the Cold War in ways that still reverberate.
Image 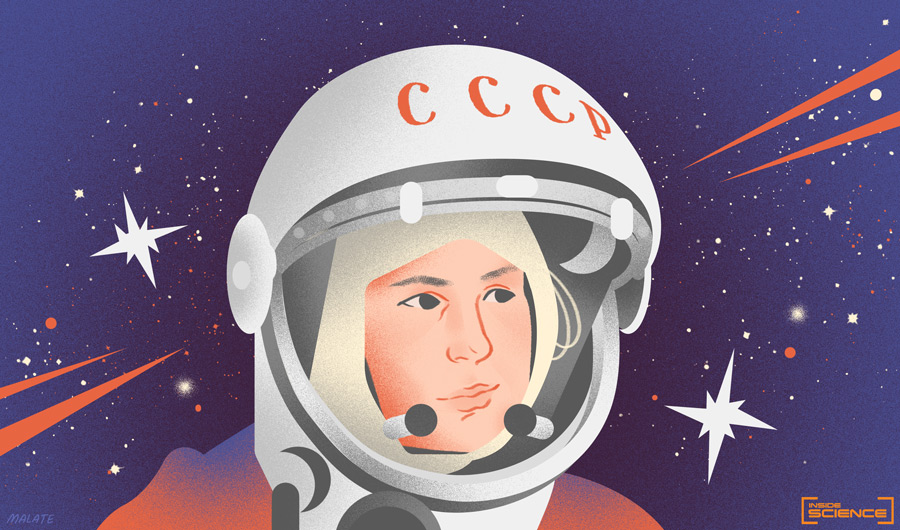 (Inside Science) -- On April 12, Russians will celebrate the 60th anniversary of an event that changed the world: the first human flight into space by cosmonaut Yuri Gagarin.

The former foundry worker's complete orbit of the Earth created both awe and concern: awe in much of the world at an achievement that seemed to exemplify the self-proclaimed superiority of the Soviet Union's technology, and concern in the United States and other Western nations that were struggling for global influence in the Cold War with the USSR that had begun as World War II ended in 1945.

For the U.S., still stunned after the Soviet Union had launched Sputnik, the first artificial satellite, in October 1957 and then sent the first living creature, a dog named Laika, into orbit aboard Sputnik 2 the following month, the news was a crushing blow. The National Aeronautics and Space Administration, created in response to the Sputniks, had launched just one creature into space: a chimpanzee named Ham who flew for just 16 minutes.

More stories about space exploration and history from Inside Science

The 50th Anniversary of Apollo 11

At a joint session of Congress on May 25, 1961, Kennedy set the goal that before the end of the decade, the U.S. should land a man on the moon and return him safely to Earth.

NASA achieved that goal July 20, 1969, when Apollo 11 astronauts Neil Armstrong and Edwin "Buzz" Aldrin landed on the moon, providing the U.S. with a resounding victory in the space race with the USSR.

The political drama has largely obscured the human story of Gagarin and the problems he encountered before, during and after his flight. But a slow dribble of leaks from Soviet archives has revealed several details about the venture.

Gagarin played little active role in his mission. Automatic controls or signals from the ground drove his Vostok 1 spacecraft. The craft also lacked engines to slow it down as it reentered the atmosphere. So Gagarin had to eject from the craft and parachute to the ground. The Soviet government didn't admit that fact until 1971.

Because Vostok's orbit was too high, Gagarin landed hundreds of miles off course, in a potato field. He had to ask two amazed spectators for directions to a phone from which he could call in his location. The bystanders gave him a horse and cart for the journey.

Stephen Walker, a British writer and documentary filmmaker, reveals long-secret details of the flight in "Beyond: The Astonishing Story of the First Human to Leave Our Planet and Journey into Space," a book to be published on April 13.

Some of the problems Walker reveals were mundane. The tape recorder that Gagarin used to commentate on his flight ran out of tape, so he had to rewind it. Later, he couldn't reach his pencil after it floated away, preventing him from taking notes.

But other issues were hard to believe as the products of a sophisticated space program. "Days before the flight, mission controllers discovered that the craft was overweight," Walker said. "An engineer had to pull pieces out to get the weight down." There was even talk of replacing Gagarin with his substitute Gherman Titov, who was lighter but less photogenic than Gagarin, and whose first name, German in English, had uncomfortable overtones of Nazism. 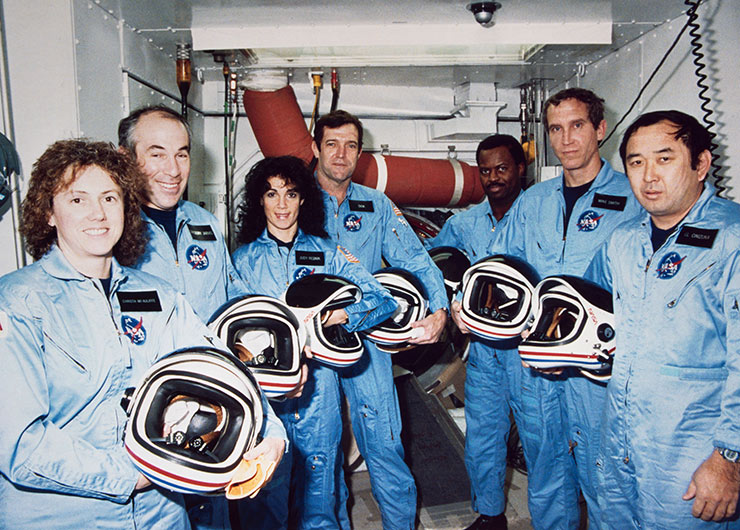 In addition to heroes like Yuri Gagarin, human spaceflight has its victims. Astronauts and cosmonauts have died in accidents while training, during launches, in space itself, and on reentry. "Putting human beings on the top of a rocket that has an explosion going on is not safe," said Cathleen Lewis of the National Air and Space Museum. The record shows the truth of that statement.

A similar fire in an Apollo capsule on the launchpad killed astronauts Virgil Grissom, Ed White and Roger Chafee in January 1967. Three months later, cosmonaut Vladimir Komarov died after his Soyuz 1 spacecraft encountered a series of problems on reentry, most notably a failed parachute.

In June 1971, three more cosmonauts died in space. A valve in their Soyuz 11 craft opened as they undocked from an orbiting space station and depressurized their capsule.

Then there were the space shuttle disasters. In January 1986, the Challenger exploded 73 seconds after launch, killing teacher-in-space Christa McAuliffe and six crewmates. Seven more astronauts died in February 2003 when the Columbia broke up on its return to Earth.

Those deaths make a strong argument for the bravery of Gagarin and other early space explorers -- and for keeping humans away from space missions in all but the most essential circumstances. "Uncrewed craft are much lighter weight and require much less, and you can have a backup craft," Lewis said. "You don't have a backup human."

"I never realized just what a risk was taken to prove that the future was red, and Soviet," Walker said.

U.S. scrambles to catch up

The details of Gagarin's flight were unknown to the U.S. government at the time. Its embarrassment at Gagarin's achievement increased a week later, with the failure of the CIA-supported invasion of Cuba at the Bay of Pigs.

Gagarin's flight "was the major trigger point for the Kennedy administration to say 'we have to stop losing this publicity war and find something we need to do'," said retired NASA chief historian William Barry.

That something was the decision to land a man on the moon by the end of the decade.

Kennedy's speech accelerated the space race and turned the tide in favor of the U.S. Despite the initial Soviet lead, the U.S. had the financial, technical and managerial resources to devise and launch what became the Apollo program.

Soviet officials waited until 1964 to approve their own moon-landing program. While they had impressive rocket power, developed for intercontinental ballistic missiles, they could not compete with the U.S. in other areas.

"Unlike the U.S., the USSR was still using vacuum tube technology" for their computers, explained Cathleen Lewis, curator for international space programs at the National Air and Space Museum.

"The U.S. also figured out how to make a venture involving 400,000 people and 20,000 different programs work together," Barry added. "The Soviets never created a NASA. Their program was run basically by their defense industry."

The U.S. had one other advantage: Unlike the Soviets, it announced its launch times in advance, and showed them live on television. "In the long run, the openness convinced the larger public that the U.S. was better than the Soviet system," Barry said.

Nevertheless, the Soviets came close to spoiling the Apollo 11 party. Delays scotched a flight around the moon that the Soviets originally scheduled for fall 1967. But Luna 15, a robotic mission designed to gather lunar material and beat the Apollo 11 astronauts back to Earth with it, failed only when the lander crashed into the moon a few hours before Armstrong and Aldrin blasted off from the lunar surface.

When the race to the moon was over, competition gave way to collaboration. In 1975, astronauts met cosmonauts for a "handshake in space" when Apollo and Soyuz spacecraft linked up. In the early 1990s, after the breakup of the Soviet Union, the Russian government agreed to join the U.S. and other countries in the International Space Station.

The partnership became closer in 2011. After NASA's space shuttle program ended, the U.S. space agency paid Russia to fly astronauts to and from the ISS on Soyuz craft. However, that relationship largely ended last fall, when NASA engaged American commercial company SpaceX as its ferry vehicle -- although some Americans will continue to fly on the Soyuz.

Now, a new era of competition in human spaceflight is emerging. Once again, it matches two different governmental systems against each other. But this time the U.S.'s rival lies beyond Russia.

"China has open ambitions about manned flight beyond Earth orbit," Logsdon said. "It has a program this decade to operate a space station in Earth orbit. It will continue robotic missions to the moon, culminating in an international scientific lunar base and [human] missions to the moon in the early 2030s. That plan is all laid out, and all indications are that China intends to follow that plan."

The new competition will differ from that of Gagarin's time. "Head-to-head competition for firsts in space is a thing of the past," Lewis explained. "China sees the economic, technological, scientific and military advantages of flourishing in the space age as a means to Chinese empowerment."

What will remain familiar, though, is the secrecy. "They don't need to announce in advance schedules that they might not be able to meet," Lewis added.

What of Russia? It still boasts ownership of the Soyuz craft, whose history dates back to 1967. "It lasted longer than anyone had anticipated," Lewis said. "But money from those [ISS] seat charges hasn't gone into a follow-up greater than a three-person spacecraft. They don't have an alternative."

Walker agrees. The Baikonur Cosmodrome, from which Gagarin's historic venture and subsequent flights have launched, "is falling apart. Wild dogs are roaming around the launchpad," he said. "The space race, if there is one, is with China. The Russians are not in that game."