In the Quantum World, Diamonds Can Communicate With Each Other

Oxford physicists using bizarre principle of "entanglement" to cause a change in a diamond they do not touch.
Image 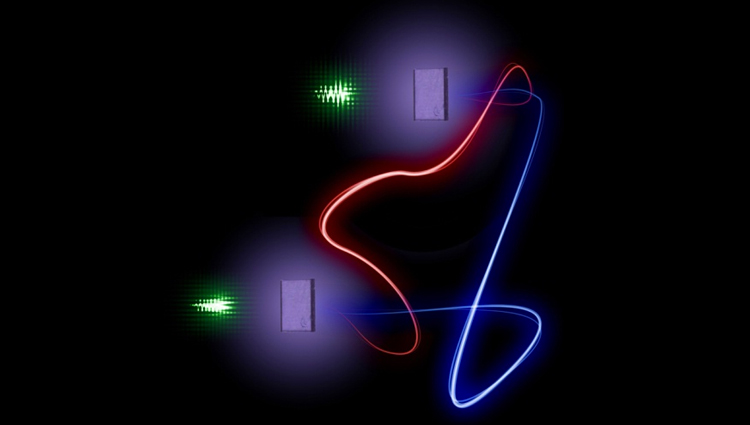 The vibrational states of two spatially separated, millimeter-sized diamonds are entangled at room temperature by scattering a pair of strong pump pulses (green). The generated motional entanglement is verified by observing nonclassical correlations in the inelastically scattered light.

(ISNS) -- Researchers working at the Clarendon Laboratory at the University of Oxford in England have managed to get one small diamond to communicate with another small diamond utilizing "quantum entanglement," one of the more mind-blowing features of quantum physics.

Entanglement has been proven before but what makes the Oxford experiment unique is that concept was demonstrated with substantial solid objects at room temperature.

This experiment employed millimeter-scale diamonds, "not individual atoms, not gaseous clouds," said Ian Walmsley, professor of experimental physics at Oxford's Clarendon Laboratory, one of the international team of researchers.

The experiment is reported in this week's edition of Science.

When zapping one artificial diamond with ultrashort laser pulses they managed to change the vibrations of a second diamond sitting a half a foot away without touching it.

Entanglement originated in the mind of Albert Einstein, who ironically came up with the notion trying to disprove quantum mechanics, a branch of physics he mistrusted all his life.

Under the theory, if two particles, say electrons, are created together, some of their attributes will become "entangled." If the two are then separated, doing something to one instantly affects the other. This would happen whether they were next to each other or across the universe.

For instance, electrons act as if they have tiny bar magnets that point up or down, described by an attribute called "spin." If the two electrons are entangled through their spins -- up or down -- and a scientist measures the spin of one, the spin of the other will react even if one is on a lab table in Oxford and the other were on a planet near the star Antares, 1,000 light years away. Instantly.

This would mean that the information about the change traveled faster than the speed of light -- which Einstein said was impossible -- or that long distances are some kind of illusion.

Einstein disparaged it as "spooky action at a distance." The German physicist Erwin Schrodinger used the term "entanglement" in a letter to Einstein. He didn't believe in quantum mechanics either.

"I think I can safely say no one understands quantum mechanics," the late physicist Richard Feynman once famously explained.

Nonetheless, quantum mechanics is now the paradigm for nature at the atomic level. It serves as the foundation of much of modern technology, from lasers to transistors. And entanglement comes as part of the package. Physicists have been demonstrating it in laboratories since the 1980s, and it is being used in laboratories experimenting with the building blocks of quantum computers.

The diamonds Walmsley and his international team used were approximately 3 millimeters (a tenth of an inch) square and 1 millimeter thick.

"We used short pulse lasers with pulse durations of around 100 femtoseconds (a quadrillionth of a second). A femtosecond is to a second as a nickel is to the debt of the federal government generally speaking," he said.

Performing the experiment with ultrafast laser pulses enabled the researchers to catch entanglement, which is usually very short-lived in large objects at room temperature.

"It remains a counterintuitive way of thinking about objects," Walmsley admitted.

"It's a very nice and clever piece of work with potentially big implications," said Sidney Perkowitz, a physicist at Emory University in Atlanta, and author of "Slow Light: Invisibility, Teleportation and Other Mysteries of Light," a book partially about entanglement. The macroscopic size, and the fact that this was done at room temperature, would be important steps toward a practical quantum technology for telecommunications and computing, and toward deeper understanding of how the quantum world and the human-scale world are related."